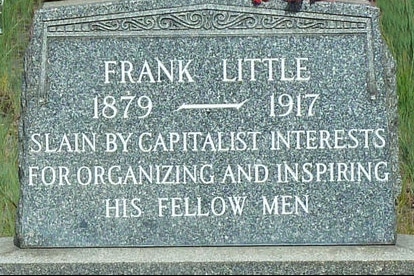 “Wobblies,” the Industrial Workers of the World, remain a glory, not only to labor or the always-fragile movements of the Left, Abolitionists to Socialists, but to the endless human craving for freedom and collective self-government. Founded in 1905, the IWW preached the inclusiveness of all working people, excluding no gender, race or supposed illegal status due to immigration status. It created, from its ranks, also unique cartoon art and songs of discontent, achieving splendid satires on existing authorities.  It threw itself into labor mobilization and free speech fights headlong, with little sense of self-preservation. Naturally, the IWW would be opposed by conservatives including labor’s conservatives. Just as naturally, it would finally be crushed through  government action and government-encouraged vigilante violence. Yet the Wobbly saga endures.

Frank Little is one of the great Wobbly martyrs. Miner and organizer of miners, organizer of farm workers, lumberjacks and industrial operatives alike, he was also a keen strategist and tactician, pioneering the passive resistance later adopted by the civil rights movement. His Free Speech fights in Western towns anticipated, and in a sense prepared for, Cesar Chavez’s crusade for grape workers of the 1950s-60s. Fearless, undaunted even by a kidnapping and mock execution in Superior, Wisconsin, he met his fate as an antiwar militant. A famous cartoon shows an agent of the “bosses” telling the press to label him a traitor, because that would justify the lynching that ended the physical presence, if not the legend, of Frank Little.

And yet, for all the legendary status, not much has been known about the real Frank Little and his life, public or private. Jane Little Botkin, great-granddaughter of Little’s brother (hence great grand-uncle to her), a public school teacher in Texas until her retirement, set herself years ago to find out more. The result is extraordinary in many ways. 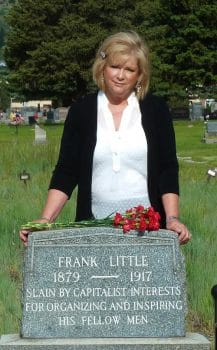 Frank Little and the IWW is a family story, her own family story, as she rightly says. The story is hers because she tells us about how scarce were the details she learned, growing up, discovering a single photo of Frank among family leavings. She knew him to be controversial, but also had reasons to know that he had been widely lauded as a great figure in the labor movement a century ago. Or, at least, viewed widely as a martyr for the impoverished and the victims of pseudo-patriotism.

She puts the story together, piece by piece, before our eyes, and that is large part of the pleasure of this text. She discovers, for instance, that Frank borrowed $50 from his mother, during a trip back to Guthrie, Oklahoma in 1904, and that her second husband flew into a rage so public that she sued him for alimony, rousing a crowd at the trial and reaching the newspapers with a certain amusement. Frank, for his part, began sending his mother cash, what little he earned as a union organizer. The contrasts between Frank and the land boomer, promoters and speculators like his stepfather, offer a contrasting view of the West and its promise. We can appreciate now better than before what the speculators had in mind for exploiting and despoiling human as well as natural resources in today’s earthquake-ridden Oklahoma. Frank had in mind a multiracial people’s republic.

Botkin has done a marvelous job with details, going far beyond the treatments of Frank Little in the standard histories of the IWW and the Western Federation of Miners. She also tackles one heretofore unasked question: was Frank Little really part Indian, or half Indian as in some accounts? The answer she derives is, probably not. Why would the IWW or Frank, or the historians and folklorists afterward, make a point of this connection? It’s an intriguing question that touches deeply upon the IWW and its symbolic significance in American life.

One might almost say that organized labor, in the US, was born in sin. The movements of the 1820s-30s, on the East Coast, flowed into the Andrew Jackson’s Democratic Party, embracing black slavery and extermination of Indians. The leaders of the scattered national labor federations, through the Civil War and after, clearly preferred the Democratic candidates, especially when these had come to support Irish-American interests, and to oppose the likes of Abraham Lincoln and definitely also the likes of woman’s rights activists. Future AFL leader Samuel Gompers cut his teeth politically in testimony to Congress urging the exclusion of Chinese immigrants. As the AFL consolidated its strength, the line was drawn pretty clearly against nonwhite, female, and other unwanted competitors to craft union membership.

Exceptions to these rules could be found all along the line. But if we include agricultural labor, domestic work, and sectors heavily nonwhite, also “unskilled” workers in many industries heavy with new immigrant populations, a majority of American working people were most definitely excluded from the existing labor movement of 1905.

The Wobblies, rejecting the very legitimacy of wage-labor as well as race privileges of all kinds, viewed the process and value of organization as if from another planet. In the Southwest, for instance, where the  borders between the US and Mexico meant little to many inhabitants, and across larger parts of the West where tribal lands had their own mixtures of races, “labor” had to be seen differently if it was to be understood at all. Thus, Wobblies in legend and reality might be Mexican regional activists at other times, as bi-racial or multi-racial workers changed “identities” when crossing from one territory to another. Frank Little chose a transracial identity.

Botkin does not draw this particular conclusion, for lack of decisive evidence in Little’s own words. But it makes sense. And in the end, it would not matter. The lynching of Frank Little in 1917 was mirrored by the legal lynching of the IWW at large, with some of the heaviest sentences ever imposed upon what were, in fact, political prisoners. Woodrow Wilson’s Sedition Act, passed in 1918 and repealed in 1920, prompted government agents to make hundreds of arrests. Some one hundred and fifty Wobblies were put on trial in various locations, even though the IWW itself, as a national body, had been careful not to specify opposition to the War.

Not that the IWW itself was wholly smothered. The Agricultural Workers Organization, a branch of the IWW, actually managed to survive such attacks and begin anew, until the political climate of the 1920s and the appeal of the Communist movement to young radicals turned the IWW into the small if sometimes lively propaganda organization it has been ever since.

Not that the prisoners were forgotten. Frank’s sister in law, Emma Little, remained in Fresno, California, scene of the famous free speech fight, one of those dedicated for many years to securing a measure of justice for those Wobblies still imprisoned. Frank’s tombstone, the author tells us, reads in part, “Slain by Capitalist Interests for Organizing and Inspiring His Fellow Men.” The State of Montana officially apologized for the conviction of 79 Wobblies and others on trumped up “Sedition” charges, their convictions at last overturned. It is a small but real consolation.

A brief review can hardly begin to offer a glimpse of the rich detail and the fine writing in the volume. Readers will surely take their own pleasure in the pages of The Blood that Stained an American Family.