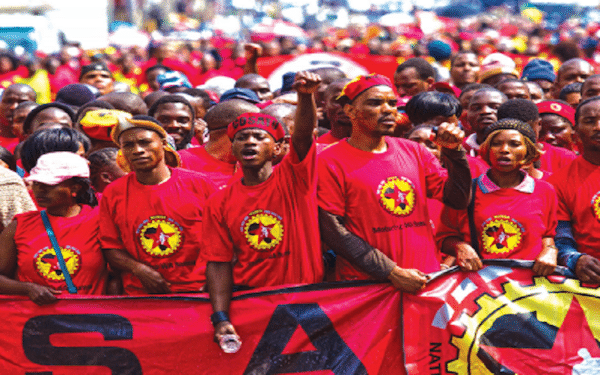 Pressed by the military forces, the president of Zimbabwe, Robert Mugabe, has finally resigned from his seat after 37 years in power. Although his resignation was celebrated by many, the National Union of Metalworkers of South Africa warns that nothing good ever came from a military coup in Africa.

The National Union of Metalworkers of South Africa (NUMSA) condemns in the strongest terms, the military coup which has taken place in Zimbabwe. The army in Zimbabwe has taken over power through a military coup and no amount of concealment of this most obvious of facts can change the ugly reality of the unconstitutional military takeover of power in Zimbabwe.

The people of Zimbabwe in general and the Zimbabwean working class and rural poor in particular, have suffered terribly and for a very long time, especially after 1990, when it became very clear that independent Zimbabwe had failed to uproot – root, stem and all – British and Western European economic domination of Zimbabwe.

Writers and historians of all kinds have speculated about how Robert Mugabe, the President of Zimbabwe, used the demand for land justice in Zimbabwe, as well as anti-colonial and anti-imperialist rhetoric to ensure a way of sustaining himself, his family and his friends in positions of power. This week the Zimbabwean army is attempting to depose him through a military coup. The army has occupied the capital, Harare and has taken over the state broadcast facility. Military vehicles can be seen patrolling the streets and soldiers are conducting random searches of civilians. No doubt, as the days stretch into weeks, and the weeks stretch into months, and of course the months into years as the army “sorts out the criminals around Mugabe” we will come to learn a lot more about the in-fighting which has sparked this military takeover both in the Zanu-PF, in the army and in the country itself.

We have noted the muted and often absent condemnation of the military coup from almost all capitals of Western Powers, where Mugabe was reviled and his death long wished for. From these there is the call for a smooth return to constitutional rule and stability, and the worthless pleas for observance of human rights and protection of human life. On its part, the head of the African Union is not sure about what is happening in Zimbabwe and says it seems a coup is underway. He has called for the military to halt their action and return the country to constitutional order. Here we are reminded about how the now obsolete Organization of African Unity used to respond to coups.

We have no doubt that millions of Zimbabwean workers and the rural poor, while not being sure where the unfolding military coup will take the country to, are maybe very relieved that Mugabe and his family are gone from the political scene in Zimbabwe. What we know though, from our own post independent African political experience and history is that military coups, even when they have briefly ushered in progressive individuals and groups such as Thomas Sankara in Burkina Faso, have always ended in the blood, sweat and tears of the majority of the population who are the working class and the rural poor. Meanwhile, history demonstrates that often the military turns out to be more corrupt than the civilians they depose.

NUMSA’s position on this is based on principle. This is not the first time we have taken a stance which was not necessarily popular. In 2013 we were the first within the ANC led Alliance to call for President Jacob Zuma to be removed, and for that we were expelled by trade union federation COSATU. Now they are singing the same tune. The working class in Zimbabwe must be vigilant. The question that they should ask themselves at this time of political turmoil is in whose class interest is this coup being imposed? Major General Sibusiso Moyo of the Zimbabwean army has already offered a clue into the motive for this overthrow. He says the army wants to rid Zanu-PF of ‘criminal’ elements. So clearly the army is acting in the interests of a Zanu-PF faction and not in the interest of the working class majority and the poor.

Furthermore one of the key leaders who is believed to be the driving force behind the coup is the former deputy president Emmerson Mnangagwa, also known as Crocodile (Ngwenya), who was recently fired by Mugabe. He is infamous for the role he allegedly played in the mass murder of approximately 20 thousand Zimbabweans after the military crushed perceived dissidents in the Matabeleland and Midlands regions in the 1980’s. At the time he was the head of the Secret Police and is said to have had a direct involvement in the killings. This is not good news for the working class. They are faced with being led by an authoritarian leader or a potentially ruthless military dictatorship.

There are powerful lessons from Zimbabwe and from the rest of the continent for the working class in our more than half a century of post colonialism, that fretting with socialism without actually overthrowing capitalism and imperialism, has always ended in deeper and more sustained misery for the working class and rural poor populations of Africa. Imperialism and its local agents upon returning have been more arrogant, vicious and totally insensitive to the suffering of the working class and the rural poor. We want to make it very clear, NUMSA does not support Mugabe. Like Zuma he should have left yesterday. Who replaces him is an issue for us. The working class in Zimbabwe cannot continue to support its worst butchers

We are calling upon all the progressive civil society formations in Zimbabwe in general and the working class and the rural population not to despair, but to organize, mobilize and educate themselves about the evils of capitalism and imperialism, and dedicate themselves, as we have done here, to fight for a united and socialist Africa. Nothing good will come from the adventures of the soldiers, after Mugabe for the working class and the rural poor. The only true and lasting solution to the crises in Zimbabwe is genuine socialism under the leadership of the Zimbabwean working class.

We are calling upon the entire world of progressive and socialist formations to come to the aid of Zimbabwe now, in its hour of great need. The South African working class in particular owes Zimbabwe a huge debt. Part of the economic crisis in Zimbabwe was inflicted upon it by imperialism because of its support for our liberation. It is time to show that we care about our fellow workers and rural poor populations in Zimbabwe. NUMSA will be carefully monitoring the goings on in Zimbabwe, with a view to determine how, together with other socialist and progressive formations in this country, we can do our part to fast track the process of building working class power in Zimbabwe, for the struggle for a socialist Zimbabwe.

We are inspired by the great revolutionary and former president of Cuba, comrade Fidel Castro who once said:

All Zimbabweans in general and the Zimbabwean working class in particular must know that NUMSA, a Marxist-Leninist inspired revolutionary trade union is suffering with them, in this their terrible hour of need. We are ready to jump into the same trenches with you, Comrades!