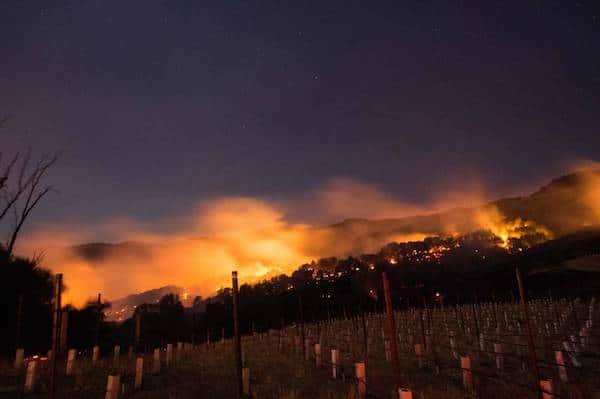 Fires driven by fierce Santa Ana winds are threatening the Los Angeles area this week on the heels of the deadly blazes that swept through California’s wine country this fall. California Department of Forestry and Fire Protection spokesman Scott McLean warned on Wednesday that “epic winds” with gusts near hurricane strength, dry brush and humidity in the single digits meant any new ember could quickly blow into a dangerous blaze.

Wildfires are hugely complex events, complicated by human activity, including rampant development and decades of fire suppression strategies that left too much dry timber and underbrush for fires to burn.

An increasing body of research finds that the hot and dry conditions that created the California drought were brought on in part by human-caused warming.

Higher temperatures pull moisture out of soil and vegetation, leaving parched landscapes that can go up in flames with the slightest spark from a downed utility wire, backfiring car or embers from a campfire.

California’s average temperature has risen about 2 degrees Fahrenheit during the second half of the 20th century. Altogether this has led to more “fuel aridity”—drier tree canopies, grasses and brush that can burn.

“There’s a clear climate signal in these fires because of the drought conditions connected to climate change,” said Daniel Swain, a climate scientist at UCLA. 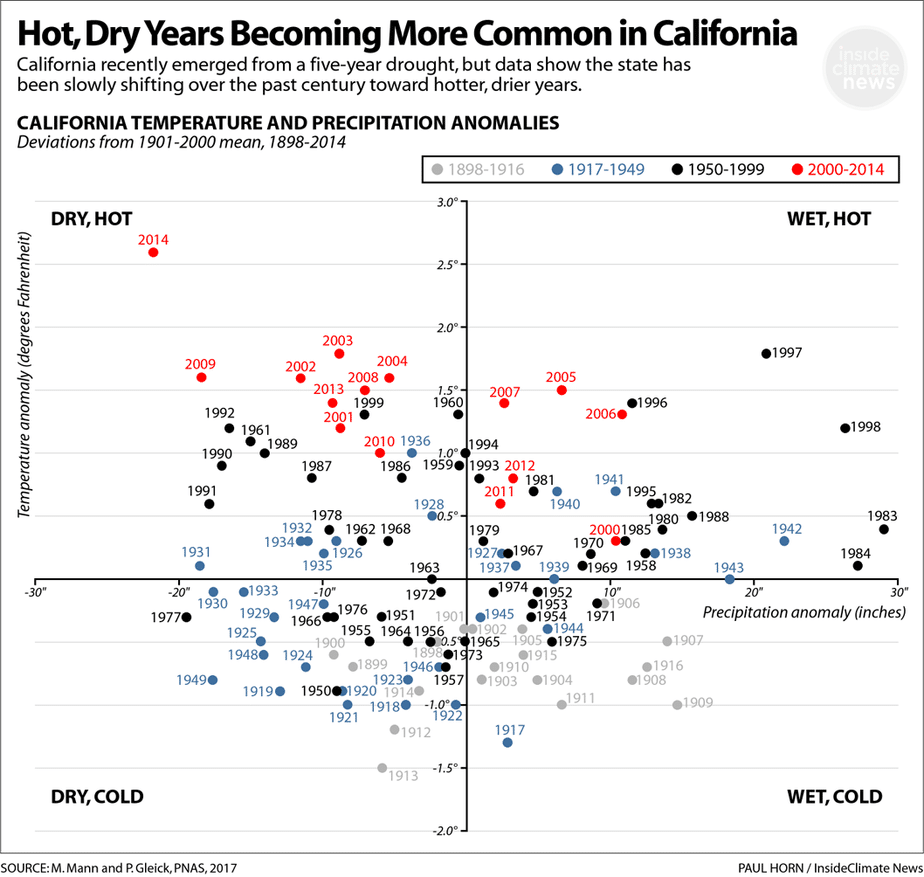 “As long as there’s fuel to burn, your chances of having large fires increases when you increase temperatures. It’s that simple,” said Park Williams, a bioclimatologist at the Lamont-Doherty Earth Observatory at Columbia University.

Why didn’t the wet winter and spring help?

After nearly five years of extreme drought, California finally got a lot of rain over the fall and winter. By the spring, snowpack in the Sierra Nevada was at a near-record level—higher than it had been in the preceding four years combined—and it helped put an end to the drought. 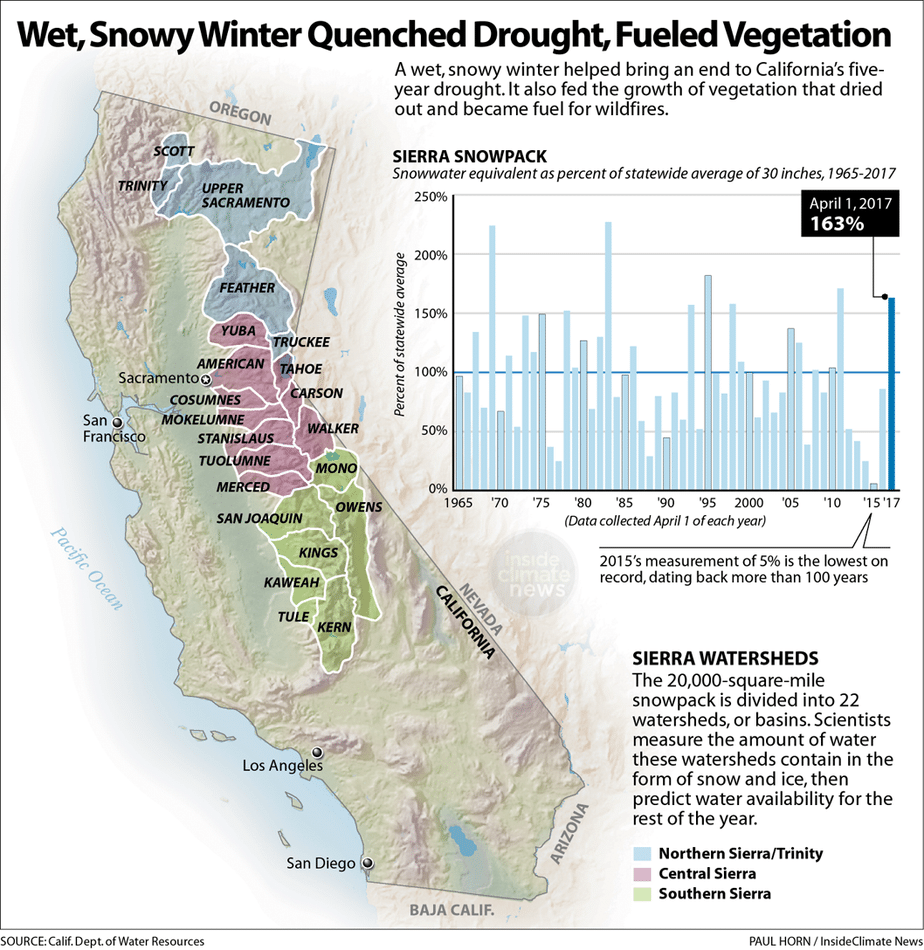 California’s climate follows a pattern: Wet, cool winters, followed by long, dry summers. The wet winter this year led to an abundance of vegetation. But then the summer reached record-breaking temperatures that dried all that freshly grown vegetation into tinder.

An analysis showed the grasses and scrub were at all time record dry levels before the wine country fires in early October. “Fire literally exploded and raced along the landscape,” the National Weather Service said.

“This summer was so hot, that even a well-above-average winter wasn’t enough to prevent the record-dry year from drying out vegetation,” Swain said. “Both sides were important.”

Why do these fires spread so fast?

When the first blazes began to spark in Napa and Sonoma counties late on Oct. 8, residents told firefighters they saw trees, uprooted by strong winds, toppled onto power lines. But it’s still unclear if all of the fires were sparked that way.

What’s clear is that the seasonal hot, dry Diablo winds, sweeping down from higher elevations, fanned the flames. 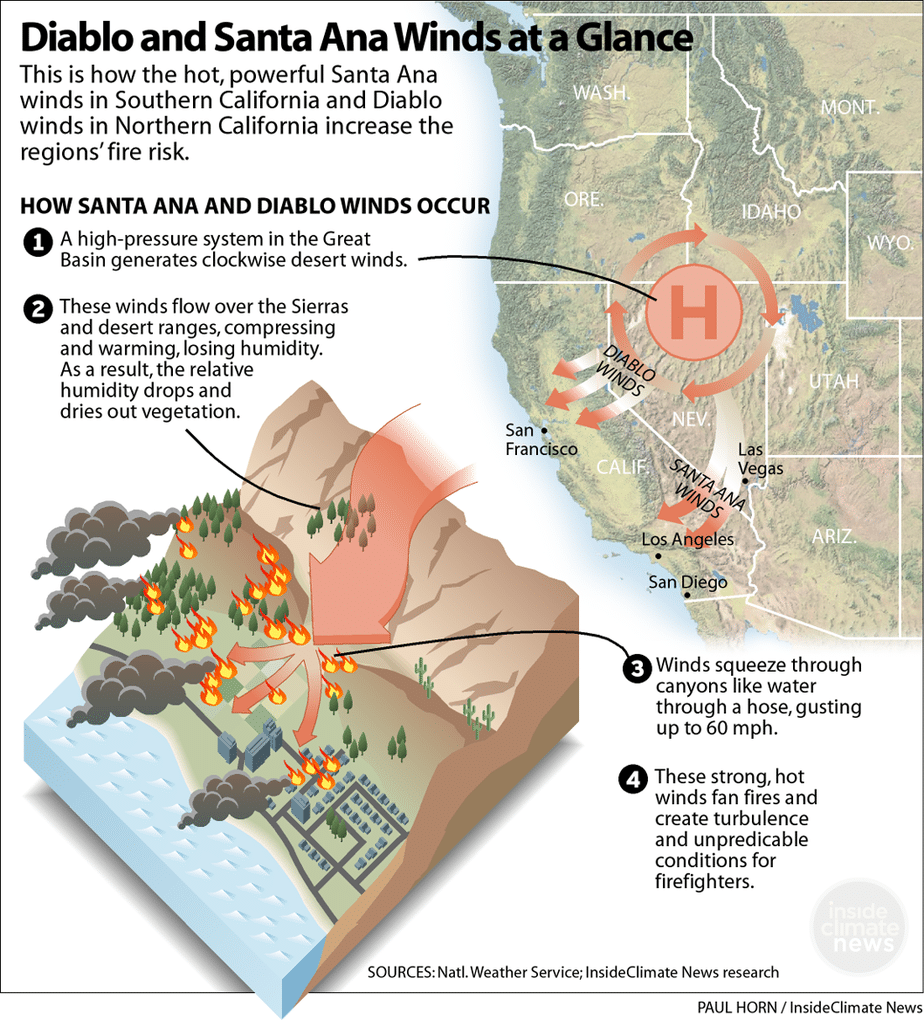 The Diablo winds are a known fire enabler, and the results this year were especially destructive. The National Weather Service reported that wind gusts in wine country hit nearly 79 miles per hour. Wind-driven fires can move quickly, and these leapt hundreds of feet in seconds.

The southern part of the state has its own seasonal hot, dry winds, called the Santa Ana, and those helped drive the fires near Los Angeles in December. Research projects that those winds will fan more destructive and larger fires in that region—an increase of about 60 percent by mid-century—while non-wind driven fires will also increase because of hotter, drier summers—by nearly 80 percent in the same timeframe.

Development is also an issue in fire risk. Over the past half century, humans have pushed farther into wildland areas, building more homes, businesses, roads and utility lines. As firefighters protect these areas, fewer wildfires—a natural part of many ecosystems—have been allowed to burn, allowing fire fuel to grow. Roughly 46 million homes are in these wildland-urban interface areas, and more than 5 million are in California.

Will extremes get worse with climate change?

Recent research from the Pacific Northwest National Labs and Utah State University scientists projects that extreme drought and extreme flooding in California will increase 50 percent by the end of the century—potentially triggering the growth of vegetation that quickly becomes fuel as temperatures rise in the summer.

If global carbon emissions continue at a high level, extreme dry periods will double, the study finds—going from about five extreme dry “events” during the decade of the 1930s, to about 10 per decade by the 2070s.  Extreme wet periods will increase from about 4 to about 15 over the same periods, roughly tripling, it says. 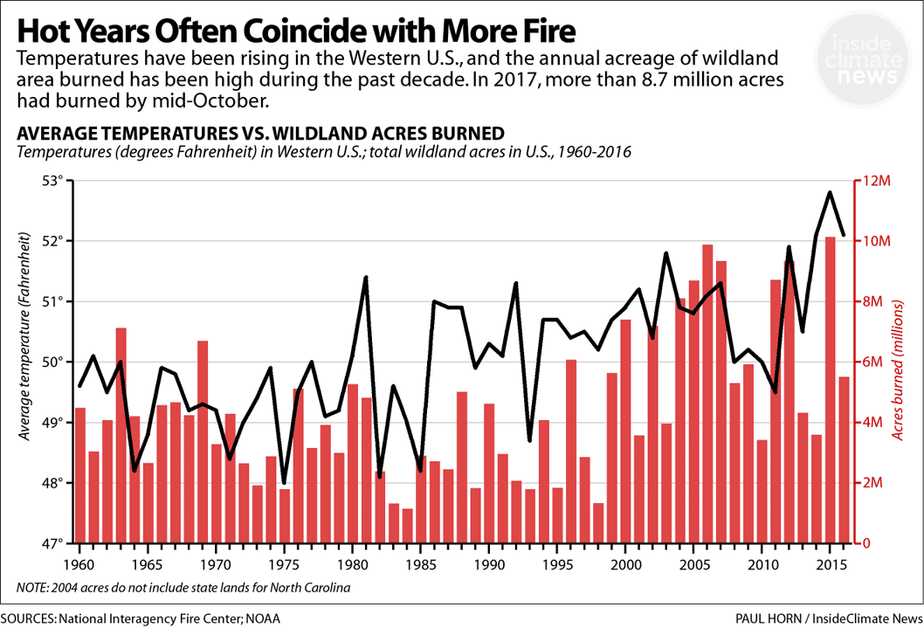 Not all the models agree on the increase in precipitation. “But it’s really interesting that most climate models agree that California will have an increasing frequency of very wet winters,” Williams said, noting that this would represent a change in extremes, not averages.

“That would load the dice toward higher fire activity,” he said.