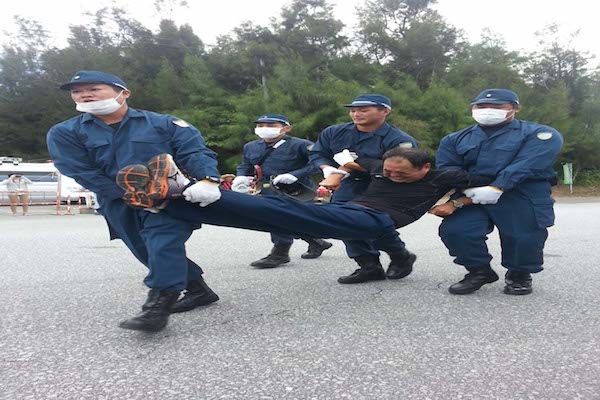 There are eighty of us sitting down, linking arms, blocking the gates of a US military base. Private security guards are lined up behind us, while men in uniform film us from behind barbed-wire fences. Suddenly, Japanese police officers pile out of their vans in their dozens. They grab a protester, a woman in her seventies. She goes limp and screams “US bases out of Okinawa!” as they carry her away. Anguish is written on her face. We desperately hold onto each other, knowing that we’re also about to be grabbed. We try to resist the police prying our arms apart. One by one, we’re removed from the gates and put into a police pen. It takes forty-five minutes to remove us all.

As anti-militarist activists, we visited the Japanese island of Okinawa in August 2017 to join the protests against US military bases. Over the course of the week, we join these sit-ins three times a day, every day. The number of people at the protests ranges from 20 to 200. Many activists are in their seventies or eighties. People chant and sing Okinawan protest songs as they wait for the police to drag them away. We get bruises and sore arms from the force of the officers.

In July 2014, the people of Okinawa began blockading the gates of Camp Schwab, a US military base situated in Henoko village, to try to prevent its expansion. Since then, activists have come from all over Japan, and occasionally from around the world, to join locals in preventing construction materials and vehicles from entering the site. Many protesters have been arrested, and several have been imprisoned for anti-base activities.

The plans for Henoko include the relocation of an existing US military facility to Camp Schwab and the building of a runway and helipads on the ocean, directly on top of a coral reef. The runway will have disastrous consequences for Oura bay, a fragile aquatic ecosystem home to many unique species. The population of endangered dugong and green turtles will also be threatened. The costs of the construction at Camp Schwab are paid for by the Japanese government.

In 1997, a referendum found that the majority of local people opposed the plans for the base. In 2007, a survey indicated that 85% of the population of Okinawa were against  the new construction. Despite this, the Japanese government and US military are pressing ahead with their plans.

Towards the end of the Second World War, the US invaded Okinawa. One in four Okinawans were killed during the Battle of Okinawa. After the war, the US military took over the Japanese military bases on the island. They have had a presence there ever since.

After Japan surrendered in 1945, the US began a military occupation of the whole country. When power was handed back to the Japanese government in 1952, it was on the condition  that the occupation of Okinawa and the rest of the Ryukyu islands continued. The US military wanted Okinawa as a strategic base to dominate China and Southeast Asia. Okinawa had been under US military rule for 27 years, until the island was brought back under Japanese control in 1972.

Although the US occupation had officially ended, its military personnel never left Japan. There are approximately 50,000 US military personnel in Japan, over half of whom remain stationed in Okinawa. Okinawa houses 70% of US military bases in the country, but covers only 0.6% of the country’s landmass. US bases occupy a massive 18% of the land on the island.

Since the occupation of Japan, Japanese governments have followed a policy of strategic alliance with US militarism. This means that the government will not oppose US bases on Japanese soil.

The US military has made its presence felt. Islanders are subjected to daily Osprey helicopter flights, which cause stress, sleep deprivation, and noise pollution. Forty-five Ospreys have crashed on the island since 1972. Military vehicles are a regular sight on the streets and soldiers use the north of the island, including the places where people live, for armed jungle training. US marines have been responsible for over a thousand violent crimes on the island since 1972, including rapes and murders. The US have tested the chemical toxin Agent Orange on Okinawa.

The demonstrations outside Camp Schwab would not exist if it weren’t for the older population of Okinawa, some of whom attend the sit-ins three times per day. 71 year old Hiroshi Ashitomi is a respected elder of the campaign. He makes enthusiastic speeches over the microphone, giving courage to those who are about to be removed by the police. Ashitomi agreed to talk to us about what it’s like to live with the military presence in Okinawa, and about the opposition to the base. He speaks to us in Japanese as an activist friend translates for us. 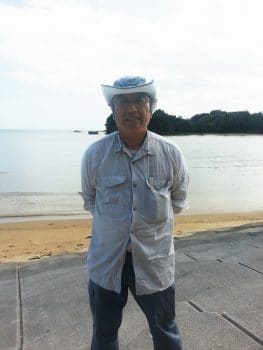 Can you tell us about your childhood?

I was born in 1946, just after World War Two. My father went to university in Tokyo and he couldn’t return to Okinawa during the war. So I was born in Tokyo. When I was fifteen years old I came back to Okinawa. The US military was here.

How did the military occupation affect your family?

Can you tell us about the seizures of land by the military?

The Japanese military took Okinawan people’s land during the Second World War. After the war, the US military took control of the Japanese bases. During the Korean and Vietnam wars the US military took more and more land for their bases. They took it by force, using bulldozers and bearing arms. The people didn’t have any choice but to give up their land. There was no democracy and they colonised Okinawa. There were no rights for the people. That’s why Okinawan people have always protested against the military.

At that time the idea of Okinawan independence wasn’t very common, so we were fighting for Okinawa to return to Japan.

During the Vietnam war some US soldiers ran away from the US military, and Okinawan people supported them. 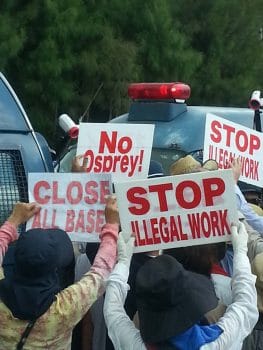 What happened when the occupation ended and Okinawa returned to Japan?

Can you explain the effects of the continued US military presence on the people in Okinawa?

The military have been responsible for rapes, murders, road-traffic accidents and drunk driving. One small example of the behaviour of the military is that sometimes soldiers don’t pay taxi drivers.  They get out of taxi at the gate and run into the base without paying.

The military also causes environmental pollution, and there is noise pollution from helicopters. At night, after 10pm, they fly over our houses while people are trying to sleep.

In 1995, three US soldiers raped a 13 year old girl. People were very angry and the anti-base movement got bigger and bigger.

Two and a half years ago a female US soldier was raped at Camp Schwab. Afterwards she committed suicide.

In 2016, a 20 year old Okinawan woman, Rina Shimabukoro, was raped and killed by a former US marine. It was really terrible. Many more rape cases are happening in Okinawa and are not reported. As long as the US military is here it will keep happening again and again.

Could you tell us about the resistance to the expansion of the US base at Henoko?

After we heard about the new plans, in 1997, people in Nago city organised a residents’ referendum to decide whether they would say yes or no to the new plan. More than half of the people voted no. That referendum was very confusing for the people because many of them worked for the company that would get the base construction contract. It was hard for the workers and their family to say no because they might have lost their jobs and also because the base construction would have given them work. But still over 50% voted no. 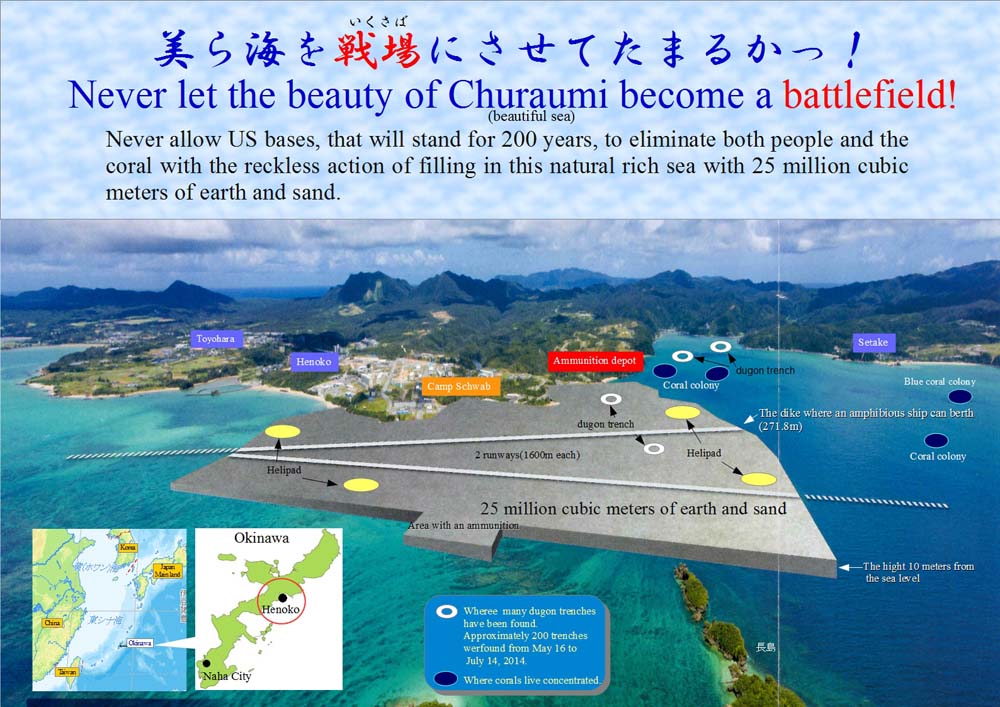 Poster against the expanded US base in Okinawa. Source: Okinawa Peace Support

Since then, what strategies have people used to oppose the new base construction?

In 2004, activists began using kayaks to monitor the military base from the sea. A tent was set up by the beach where people came to learn about peace, and about the history of Okinawa.

Three years ago, when they started bringing the construction vehicles in, a protest tent and sit-in at the gates of Camp Schwab started. Police come and take us away but we sit again and again. We try to show the world and the government that we’ll never give up. That’s our motto: never give up.

Our protest is based on non-violence. The network of people in Okinawa against the US military includes local businesses and conservative people, not only activists but ordinary people. If we didn’t have mainstream support the police would destroy the protest very quickly. Non-violent tactics are important to get more people to support the protest in Henoko.

How do you keep going?

We try to come up with new ideas for the protests and keep doing it. It’s very hard protesting every day. But if we gave up, nothing would change.

It must be very stressful for the older people to be physically removed by the police every day, yet they make up the most numbers at the protests. Can you explain why?

Older people, even older than me, experienced the Battle of Okinawa during World War Two and they know how terrible it was. Under the US military occupation we suffered a lot of abuse and discrimination. So we know how to survive in this situation. That generation of older people have more passion than the younger people because they don’t want to see the same situation ever again. That’s why they sit there every day.

Do people in Okinawa want international support at the sit-ins?

We have to unite internationally otherwise we cannot win against the power of the US. We also need foreign media to come, interview people and spread information.

I just heard that the network of groups against the US bases in Okinawa received an international peace prize in Germany. So we know that international people are watching what happens here.

It’s good if international people can come and join us on the demonstrations, but please arrange a translator!

Would it be good for people internationally to hold solidarity demonstrations outside US embassies and consulates?

Yes, this would be very welcome. Donations would also be welcome. We need money to organise transport for the demonstrators and to pay for lawyers when people are arrested. 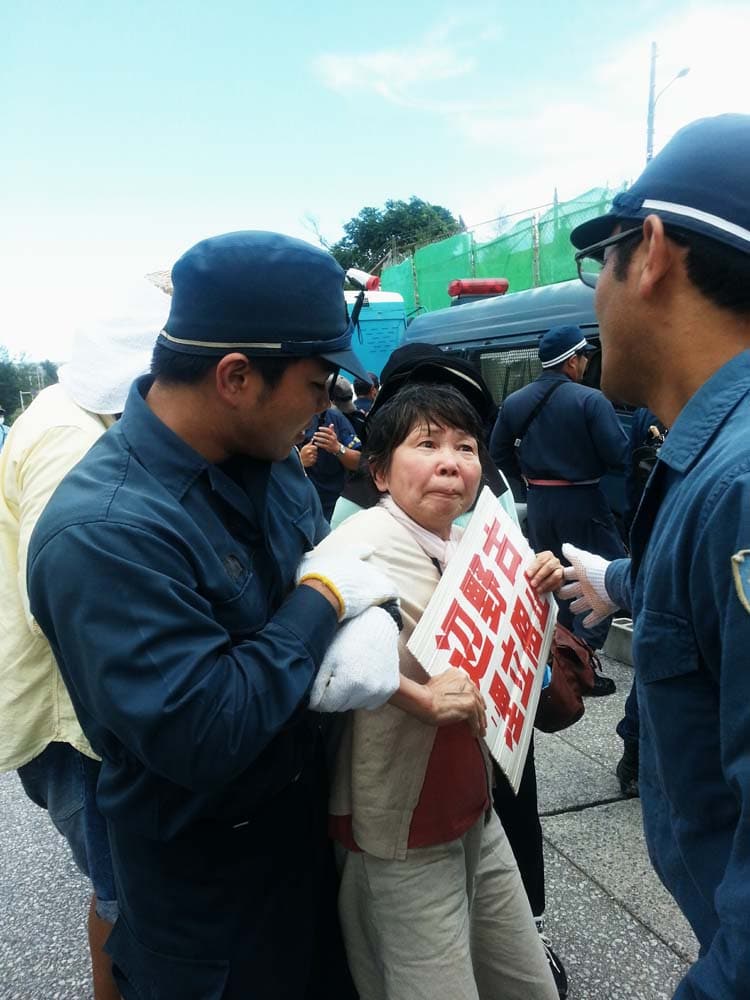 A women taken away at a protest. Photo: Eliza Egret

There are daily shuttle buses from Naha city, close to Okinawa’s airport and port, to the sit-in at Henoko. If you are interested in joining the protests in Okinawa, and would like to know more, email eliza@shoalcollective.org and tom@shoalcollective.org.

Here is a list of some of the Japanese websites with information about the protests in Okinawa:

https://henokoblue.wordpress.com/ – The blog of the kayak team monitoring the base in Henoko.

http://takae.ti-da.net – for info about the movement against helipad construction in Takae, in the North of Okinawa.

http://apjjf.org/ – Has some interesting articles in English about Okinawa.

Eliza and Tom are both part of Shoal Collective, a new cooperative producing writing for social justice and a world beyond capitalism. Follow Shoal Collective’s writing on Twitter @ShoalCollective