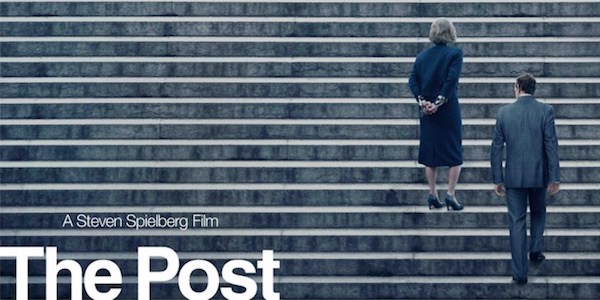 The Post is not exactly an anti-war movie, Ellsberg is not a main character, the peace movement is just rabble scenery, and the major focus is split between journalism’s struggle against government and Katherine Graham’s struggle against sexism. But we are in fact told in this film that the Pentagon Papers documented decades of official war lies and the continuation of mass-slaughter year-after-year purely out of cowardly unwillingness to be the one to end it. The Post leaves Ellsberg looking like the hero he is and Robert McNamara looking like the Nazi he was. And I’m left to complain that I have nothing to complain about.

Well, except this: We’re supposed to believe that the fact that the U.S. government had been blatantly lying about its motivations, actions, and analyses of its warmaking for decades came as a shocking revelation to every intern, reporter, editor, and publisher at the Washington Post, that they all had simply had no idea, bless their hearts, and that they all immediately believed that this brand-new truth needed to be told (with the only hurdle being the willingness of the publisher to stick to the obvious course of action when faced with legal threats from the Justice Department).

This story obscures the fact that senators, Congress members, independent reporters like I.F. Stone, and many others had been exposing the lies in real time for years. And, of course, many statements appeared to be lies without the need for any exposure. We’re expected to overlook the willful suspension of disbelief required to believe, for example, that predicting imminent success in Vietnam over and over again for years was all driven by honest reflection on facts. The peace movement was the massive recognition of the lies. The peace movement persuaded Ellsberg to act. The people running the Washington Post cannot have been quite as oblivious as we’re led to believe.

The same tale of innocence also may leave the moviegoer with the entirely false impression that the Washington Post has instinctively challenged the most blatant war lies ever since the days of Tricky Dick. Nothing could be further from the truth. Ellsberg has said that Trump should see this movie. I’d rather Jeff Bezos and each of his employees at the current Post see it.

Here are some of the wars that the Washington Post has helped to promote since the moment the credits rolled: Grenada, Panama, the Gulf War (the Post outdid itself promoting a fictional account of babies being taken out of incubators), Somalia, Bosnia, Haiti, Kosovo, Afghanistan, Iraq, Pakistan, Somalia, Libya, and drone wars in general.

The current U.S.-Saudi war on Yemen is unusual for the Post‘s pretense that the U.S. military isn’t actively engaged in it, even while admirably asking the U.S. to ask the Saudis to open the ports.

Here’s an excerpt from my book, War Is A Lie:

In May and June 2005, the most repeated excuse by U.S. media outlets, including the Washington Post, for not covering the Downing Street Minutes and related documents demonstrating the dishonesty of the planners of the War on Iraq, was that the documents told us nothing new, that they were old news. This conflicted, of course, with the second most common excuse, which was that they were false.

Those of us trumpeting the story as new and important scratched our heads. Of course we’d known the Bush-Cheney gang was lying, but did everyone know that? Had corporate media outlets reported it? Had they informed the public of confirmation of this fact in the form of memos from top government officials in the United Kingdom? And if so, when? When had this particular piece of news been new news?

At what point did it become stale and unnecessary to report that Bush had decided by the summer of 2002 to go to war and to use false justifications related to weapons of mass destruction and ties to terrorism? Judging by opinion polls in spring 2005, we hadn’t reached that point yet. Much of the public still believed the lies.

If you went back, as I did, and reviewed all the issues of the Washington Post that had come out in June, July, and August 2002, you found that, while what was happening behind closed doors in Washington and London may have been known to the Washington Post, it certainly never informed its readers.[i] In fact, during that three month period, I found a flood of pro-war articles, editorials, and columns, many of them promoting the lies the debunking of which was supposedly old news.

On August 18, 2002, for example, the Washington Post ran an editorial, an ombudsman column, and three op-eds about a potential U.S. attack on Iraq, as well as three related “news” articles. One article, placed on the top of the front page, reported on a memo that Secretary of “Defense” Donald Rumsfeld had sent to the White House and the media. “Defense” officials were worried that countries such as Iraq or Iran could use cruise missile technology to attack “U.S. installations or the American homeland.”

The article contained the admission that “no particular piece of new intelligence prompted the warning.” What prompted the “reporting”?

The second Post article –- by Dana Milbank — urged Bush to hurry up and argue for an attack on Iraq before opponents of such an attack raised their voices too loudly. The headline was, “White House Push for Iraqi Strike Is On Hold: Waiting to Make Case for Action Allows Invasion Opponents to Dominate Debate.” While the article did touch on some of the opponents’ arguments, it mainly focused on arguments about how best to persuade the American public and European politicians to support a war.

A third article — by Glenn Kessler — was called “Rice Details the Case for War With Iraq.” It began:

“The United States and other nations have little choice but to seek the removal of Iraqi President Saddam Hussein from power, national security adviser Condoleezza Rice said. ‘This is an evil man who, left to his own devices, will wreak havoc again on his own population, his neighbors and, if he gets weapons of mass destruction and the means to deliver them, on all of us,’ Rice told the BBC. ‘There is a very powerful moral case for regime change. We certainly do not have the luxury of doing nothing.’”

The Post’s editorial on August 18 urged the White House to make its case for war, and advised it to do so on the grounds that Saddam Hussein had refused to get rid of weapons. Here’s the last paragraph of the editorial:

“A preemptive war carries another danger: that it will seem to legitimize aggression by any stronger nation against a weaker regime in disfavor. It has long seemed to us that targeting the weapons of Saddam Hussein carries a legitimacy that other such attacks would not, because the U.N. Security Council more than a decade ago demanded that he rid himself of chemical, biological, and nuclear weapons, and he has refused to do so. That is also a case that the administration must make more persuasively.”

The Post’s ombudsman column on the same day was titled “Covering the War Before it Starts,” and lamented the Post’s biased coverage in favor of attacking Iraq. Unfortunately, this admirable observation was overshadowed by three much longer op-eds on the next page.

The best of them, David Broder’s, questioned the accuracy of CIA information on Iraq, briefly mentioned a few concerns, and then joined the chorus urging Bush to make his case.

The worst of the op-eds — which was placed at the top and center of the page, illustrated by a clenched fist with an Uncle Sam sleeve pounding on a map of Iraq — was by former national security advisor Zbigniew Brzezinski. The title was “If We Must Fight . . . .” It didn’t call proponents of peace “assisters of terrorism,” as a Post column had done some months earlier, but it did assume there was no reason to work for peace.

Brzezinski offered advice to the President in a list of five recommended steps to war: First, Brzezinski joined the chorus in suggesting that the President must articulate some sort of reason for attacking Iraq. Second, Brzezinski suggested that the reason the President articulates must be that Hussein is producing weapons in defiance of the Security Council. (Brzezinski was good enough to add that Hussein did not use chemical weapons in the last war and that some reason must be provided to believe he would use them in the future). Third, the United States must take the lead in a new proposal for weapons inspections. Europe would support this, and Hussein would not, giving the United States a good excuse to attack. (Here we have Brzezinski plotting publicly as Prime Minister Tony Blair was privately to “wrong-foot Saddam” — the phrase Britain’s ambassador to the United States used privately in March 2002 to describe a process of manipulating Hussein into refusing inspections, thereby creating an excuse for war). Fourth, the United States must work for peace between Israel and Palestine, so that an attack on Iraq is not viewed together with the U.S.-backed Israeli assaults on Palestinians — a combination bound to anger quite a lot of people. And fifth, the United States should plan to occupy Iraq after demolishing it.

The Post’s final op-ed was by Charles “liberals are stupid” Krauthammer. He attacked the New York Times for its allegedly biased coverage against attacking Iraq. Krauthammer was upset that the Times had covered some of the stories that the Post’s ombudsman criticized the Post for not covering — including the expression of opposition to or concern about attacking Iraq on the part of various legislators and officials.

Remember this was the same “objective” media that had been so upset with President Clinton for missing a chance to launch a war on Iraq in 1998. This was the same media that didn’t blink when Bush’s Chief of Staff Andrew Card explained the delay until September 2002 of the most aggressive war propaganda by remarking “You don’t introduce new products in August.”

The war would be built on a planned marketing campaign, not resorted to as a last resort. This fact was not a scandal to be reported in the news or to legal authorities; this was what the Washington Post had repeatedly and publicly requested. The Post wanted war but wanted the President to sell the war well.

This was the same Washington Post that had written of the rising pro-war fever in the country in 1918: “In spite of excesses such as lynching [peace activists] it is a healthy and wholesome awakening.”[ii] [i] David Swanson, “Remember When Bush’s Lies Weren’t ‘Old News?’” June 20, 2005. Accessed October 9, 2010. http://old.warisacrime.org/node/407

David Swanson is an author, activist, journalist, and radio host. He is director of WorldBeyondWar.org and campaign coordinator for RootsAction.org. Swanson’s books include War Is A Lie. He blogs at DavidSwanson.org and WarIsACrime.org. He hosts Talk Nation Radio. He is a 2015, 2016, 2017 Nobel Peace Prize Nominee.