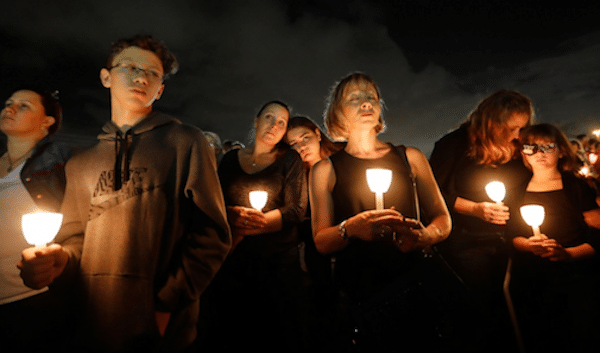 A candlelit vigil in memory of the 17 people killed in the mass shooting at Marjory Stoneman Douglas High School in Parkland, Florida.

Donald Trump has been short and sweet in his response to the tragic shooting in Parkland Florida that saw 17 students and teachers gunned down by a right-wing white supremacist.

First he repeated his long-held opinion that it isn’t yet time to discuss gun control. That opinion is probably much to do with the huge stream of funding coming to him and his supporters from the National Rifle Association (NRA).

They are busy campaigning to arm and train teachers in gun use. They say more guns in schools would make schools safer.

Trump supports the NRA as much as it supports him. He says the shootings are not a gun problem but a mental health problem.

This is the same kind of demented Trump logic that says anyone attacking civilians with guns or bombs who is black or Muslim is a terrorist whereas, if they are white, Christian and even a white supremacist, then they can’t be a terrorist, just mentally ill.

Our comparative figures for school shootings in Britain and the US are remarkably revealing.

On one hand the history of school shootings in Britain is very short.

On March 13 1996, the Dunblane massacre took place at Dunblane Primary School, near Stirling, Scotland. Thomas Hamilton killed 16 children and one teacher before committing suicide. The Dunblane shooting led to the banning of handguns in private possession in Britain. There have been no school killings and only one spree killing, in Hungerford on August 19 1987, since Dunblane.

In contrast here is a list of shootings at elementary, middle and high schools in the US that have resulted in fatalities in the last 20 years.

This list does not include suicides, gang-related incidents or deaths resulting from interpersonal conflicts.

A candlelit vigil in memory of the 17 people killed in the mass shooting at Marjory Stoneman Douglas High School in Parkland, Florida.