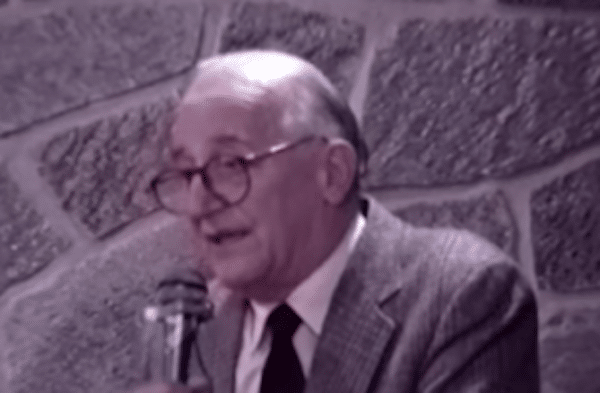 The story goes that Einstein’s theory of relativity began with a simple question: What if a person could sit on a beam of light? A single inquiry led to an entire field of study, and perhaps the world’s most famous scientific breakthrough.

The late Ed Herman’s questions were less playful. They were about war and death, lies and power politics, but they too created entire areas of study. If properly considered, they can even guide us through the perilous age in which we’re living.

Herman is best known for co-authoring Noam Chomsky’s iconic Manufacturing Consent, which explores how U.S. corporate media operates as a system of disinformation. Written during the Cold War, the book challenged readers who understood propaganda to be a tool of the Soviet Union. How could a diverse industry without official censors to monitor what it published or aired, that was neither owned nor controlled by the state, be used for social control? Quite easily, as it turns out.

The world offers an almost infinite array of events that can be covered, and media institutions must decide what’s most relevant to their audiences. In other words, they operate as an information filter. But how do they provide their viewers, listeners and readers with the best possible understanding of the world? Ideally, these institutions produce the kind of coverage necessary to make informed decisions about public policy. In reality, Chomsky and Herman discovered, they serve the interests of the rich and powerful.

In their propaganda model, the pair identified five distinct filters: Media ownership, which is concentrated in the hands of a few spectacularly wealthy corporations; ideology, specifically anti-communism, which “helps mobilize the populace against… anybody advocating policies that threaten property interests or support accommodation with Communist states and radicalism”; advertising, or the selling of audiences to advertisers, which can lead to any number of distortions and misconceptions; official sourcing, which often leads to self-censorship as media outlets become dependent on their access to members of the government; and finally organized flak, which allows lobbies to lean on journalists and outlets who deviate from the status quo.

Manufacturing Consent remains as vital today as it was when it first published in 1988. Anti-communism continues to dominate our discourse, even in the absence of a Soviet Union or communist China, while several prominent media personalities have made their careers decrying “leftist ideologues.” Media ownership has become even more exclusive, and the advertising model has overtaken the whole of society by way of Google and social media. Twitter mobs can be manufactured and mobilized; organized flak is now a matter of life and death.

Not only did Herman ask the kinds of questions that produced one of social science’s most compelling theories, but he served as a model of rigor for media critics across the political spectrum. The 1988 edition of Manufacturing Consent ran 330 pages (including appendices), 63 pages of which were endnotes. Its voluminously documented cases were always supplemented by quantitative analysis: the amount of coverage devoted to so-called enemies of the state was inversely proportional to that of crimes committed by the U.S. and its allies. This method can be applied to virtually any line of journalistic inquiry, be it war, economic crisis or a political dispute on campus.

Herman’s priorities were radical, aimed at stopping or preventing the most heinous forms of violence by exposing the media biases that facilitated them. Herman and Chomsky revealed as much in the preface to Manufacturing Consent: “It would have been very difficult for the Guatemalan government to murder tens of thousands over the past decade if the U.S. press had provided the kind of coverage they gave to the difficulties of Andrei Sakharav or the murder of Jerzy Popieluszko in Poland. It would have been impossible to wage a brutal war against South Vietnam and the rest of indochina… if the media had not rallied to the cause, potraying murderous aggression as a defense of freedom.”

Finally, Herman was relentless in his pursuit of a cause he deemed just. “Trolling” has many definitions, but when it comes to politics, it can most aptly be described as the use of bad-faith tactics to demoralize one’s opponent. Having devoted his life to exposing the consequences of media manipulation, Herman was immune to this mode of communication. He threw himself into intellectual debates with little regard for social taboos, and he gave it as well as he took it. (I learned this firsthand when he published a withering rebuttal to my review of the BBC 2 documentary, “Rwanda’s Untold Story.”)

In The Politics of Genocide, which he co-authored with David Peterson, Herman argued that Western media used the term “genocide” to quash debate about foreign policy, specifically NATO’s efforts to dismantle Yugoslavia, and the joint support of the United States and Britain for Rwandan dictator Paul Kagame. He was immediately labeled a “genocide denier.” More recently, in its obituary for Herman, the New York Times accused Manufacturing Consent of “having soft-pedaled evidence of genocide in Cambodia, Rwanda, and, during the Bosnia war, Srebrenica.” FAIR and other outlets were quick to point out that the book was published years before two of the conflicts, and the obit was corrected.

The zeal with which these outlets tried to smear Herman’s name could have made a case study for Herman himself. Knowing Herman, the study would have been carefully modeled, meticulously conducted, and revealing in its conclusions about the mainstream media. American readers would have gained a fresh understanding of their country’s propaganda system, not only how it works but how they can subvert it.