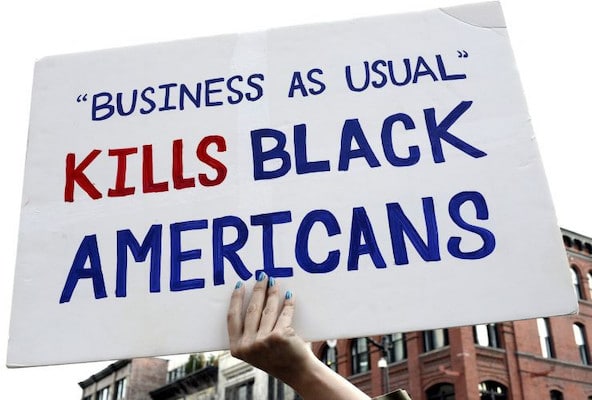 There’s No Right to a Trial in a Counterinsurgency

The Minneapolis City Council’s attempt to defund police may have fizzled out for the moment, but the problem of police violence across the United States is unresolved–and much of it stems from the institution’s colonial, counterinsurgency roots.

Here are seven counterinsurgency features of policing and the inequities in the criminal justice system. 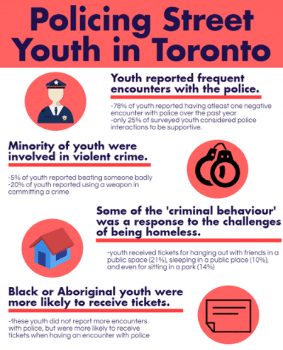 In the Canadian province of Ontario, when the Toronto Transit Commission (TTC) changed its public transportation fare collection method from tokens to the Presto card, users had a strange experience. Sure, the fare booth was predictably replaced by an inhuman and unforgiving terminal that malfunctions all the time (despite the steep price the province had paid for it). But instead of having less human interaction, TTC passengers found they had more–with fare inspectors who corral passengers into small spaces at stations to test everyone’s cards. In counterinsurgency terms, this is called a cordon-and-search operation.

Another counterinsurgency concept, that of “hearts and minds,” can be seen in a public information campaign to shame fare evasion through posters blanketing subway walls and the sides of buses. Riders were infuriated–not just by the campaign itself but also by abuses and racial discrimination by the fare inspectors. Unsurprisingly, spoofs of the TTC’s messaging followed, as they did in New York City in resistance to the Metropolitan Transportation Authority’s (MTA) fare evasion messaging.

There is nothing special about Toronto, New York City, or other transit systems that increasingly use these warlike techniques to police customers; what’s happening with the TTC and MTA is a relatively mild example of what happens when counterinsurgency methods are the first resort for any urban problem that arises.

2. Police Don’t Live in the Communities They Police

Colonial forces are imposed from outside; this prevents too much natural solidarity between the occupier and the occupied. In the United States, the majority of police don’t live in the communities they serve. One Newark officer from the Fraternal Order of Police put it succinctly: “the community hates the police. And you want to put us right in the middle of that with our families?”

As Richard Rothstein showed in his book The Color of Law, the racial segregation of U.S. cities was brought about by methodical legal means, racially explicit zoning, and the destruction of integrated neighborhoods. This segregation, too, has consequences for the police-counterinsurgency alignment.

In author James Ron’s book Frontiers and Ghettos: State Violence in Serbia and Israel, he compared the methods of state violence used in a “ghetto,” where a hostile population is meant to be contained by powerful state control but where law and morality still limit its enforcement due to the nature of oppressor and oppressed living side-by-side; and on a “frontier,” where even more devastating warfare is unleashed since state power is more tenuous on targeted populations who don’t live among their oppressors, but the bounds of law and morality are weaker.

In the United States, this theory also has applied throughout its history: domestic ghettos are policed, and frontiers are the sites of total war both at home and abroad. But the more police think of cities as the “frontier,” the more violence they will commit against the policed.

Police officers are encouraged to take weekend courses in a field called “killology,” developed by retired Army Lt. Colonel Dave Grossman. There, they learn to see themselves as “front-line troops” in a war, presumably on the civilians they are policing.

4. In a Counterinsurgency, Everyone’s a Criminal

According to defenders of law enforcement, the thinking is: If you don’t want to be policed, don’t commit crimes, right? But the law creates the criminal. 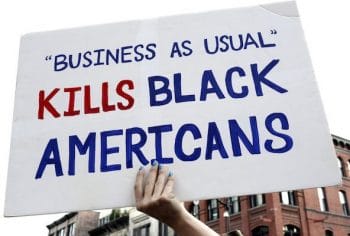 And the number of laws for police to identify those criminals is growing suspiciously. American University professor Emilio Viano notes, quoting the conservative think tank the American Heritage Foundation, that “the ‘number of criminal offenses in the United States Code increased from 3,000 in the early 1980s to 4,000 by 2000 to over 4,450 by 2008.’ From 2000 to 2007 Congress added 56.5 new crimes every year.” The staggering number of laws is incongruous to American society’s actual concerns, as is evidenced by attorney Harvey Silverglate’s book arguing that the average American commits “three felonies a day.”

In this system, the full weight of the law is available to bring down upon anyone at any time. And once it is brought down on you, you have no meaningful right to a trial.

5. There’s No Right to a Trial in a Counterinsurgency

In TV cop shows, the police are constrained by clever lawyers and fair-minded judges in the courtroom–but in reality, cases almost never go to trial. As Professor Viano writes:

“In fiscal year 2010, the prevalent mode of conviction in U.S. District Courts of all crimes was by plea of guilty (96.8% of all cases). The percentage ranges from a relative low of 68.2% for murder to a high of 100% for cases of burglary, breaking and entering. With the exception of sex abuse (87.5%), arson (86.7%), civil rights (83.6%) and murder (68.2%), for all other crimes the rate of convictions by plea of guilty is well over 90%. In the… [2012] U.S. Supreme Court decision, Missouri v. Frye, Justice Kennedy, writing the majority opinion, pointed out the statistics that 97% of federal convictions and 94% of state convictions are the result of guilty pleas.”

The fact that 90 per cent of cases don’t go to trial is the outcome of two Supreme Court rulings described by Michelle Alexander in a 2012 op-ed in the New York Times:

“The Supreme Court ruled in 1978 that threatening someone with life imprisonment for a minor crime in an effort to induce him to forfeit a jury trial did not violate his Sixth Amendment right to trial. Thirteen years later, in Harmelin v. Michigan, the court ruled that life imprisonment for a first-time drug offense did not violate the Eighth Amendment’s ban on cruel and unusual punishment.”

Regardless of the innocence of the offender or the senseless overzealousness of law writing and enforcement, it is standard operating procedure that the accused do not get their day in court. Instead, prosecutors threaten the accused with shocking sentences, and have them plead guilty to something less to get them into the life-ruining prison system.

Alexander noted that the criminal justice system is unequipped for any other way: “If everyone charged with crimes suddenly exercised his constitutional rights, there would not be enough judges, lawyers or prison cells to deal with the ensuing tsunami of litigation.” The author of The New Jim Crow: Mass Incarceration in the Age of Colorblindness also argued in the New York Times op-ed that “crash[ing] the system just by exercising our rights” could comprise a strategy to combatting the inequities and flaws in the criminal justice system. Blogger Arthur Silber agreed that this strategy could work if done en masse, noting, “[n]othing short of mass non-cooperation has a chance in hell.”

But the price of seeking one’s right to trial is prohibitive. Julian Assange is being publicly tortured right now mainly for doing journalism, but partly also for insisting on his rights to a trial. And Aaron Swartz was hounded to death, driven to suicide by a prosecutor applying the standard operating procedure by threatening Swartz with a 35-year sentence for trying to make scientific publications available to those outside of university paywalls.

In cases relating to the drug war, the goal of police and prosecutors is also to get the accused to turn on one another: in exchange for more lenient punishments, suspects are made to become informants against others–another key element of counterinsurgency and its slow destruction of solidarity in the criminalized, targeted society.

6. U.S. Policing Was Developed in Concert With the US Empire

Consider one of the founding fathers of American policing, August Vollmer. A U.S. Marine who invaded the Philippines in the Spanish-American War in 1898, he set out to “reform” Berkeley’s police when he became its first chief in 1909. He used the scientific techniques of counterinsurgency developed by the U.S. empire in the Philippines (a system described in Alfred McCoy’s book Policing America’s Empire: The United States, the Philippines, and the Rise of the Surveillance State). Vollmer brought in centralized police records, patrol cars, and lie detectors. Vollmer established a criminal justice program at the University of California, Berkeley in 1916 and wrote books including scientific racist theories of “racial degeneration” and crime. He joined the American Eugenics Society and wondered how to prevent “defectives from producing their kind.”

Smedley Butler provides another example. The military man famously wrote that he had been “a gangster for capitalism,” including that he “helped make Haiti and Cuba a decent place for the National City Bank boys to collect revenues in.” He had done so by, among other things, establishing Haiti’s first police force when the Marines occupied that country in 1915, as Jeremy Kuzmarov describes in his book Modernizing Repression: Police Training and Nation-Building in the American Century. When Butler became police chief in Philadelphia in 1924, he too upgraded police technology and militarized its tactics, including military checkpoints and Marine-style uniforms. The mayor fired him after two years, sending him back to the Marines.

In counterinsurgency campaigns, state armies and police work with paramilitaries, who do dirty work with plausible deniability.

As Alan MacLeod reported on September 28, there were more than 100 vehicle ramming attacks against protesters since the George Floyd protests started in May, many of which “seem to have the tacit approval of local law enforcement,” given the lack of consequences.

It is called impunity: the criminal activities of paramilitaries or proxy forces go unpunished, while the full power of the state is brought down upon the intended victims of counterinsurgency.

The default counterinsurgency mode is a consequence of being ruled by an elite that sees the whole population as the enemy. The model for policing isn’t going to be changed even if Trump is replaced by “shoot them in the leg” Biden. The occupied always challenge the legitimacy of their occupiers: the debate about abolition is not going anywhere. •