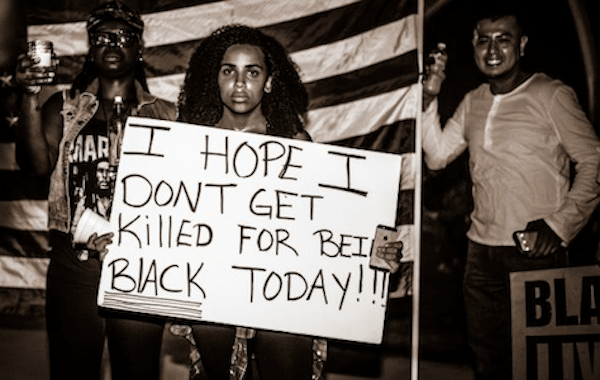 Race/isms Book Forum is a new series aimed at bringing established and emerging voices together in conversation around recent work that critically engages our world’s racial scripts, past and present. The structure of the forum is straightforward. We invite three to four thinkers to grapple with a book, highlighting a section of it, and then provide the author(s) an opportunity to respond however they see fit. Published over several days, we seek and encourage dialogue that traverses the forum’s boundaries. Our desire is to have these conversations, and the books they’re based on, grow from and exceed what’s been written. The pursuit is possibility, not conclusion.

For our first installment, we feature and discuss Christopher Lebron’s recently published intellectual history: The Making of Black Lives Matter: A Brief History of An Idea. The discussion includes reflections by Jenn M. Jackson, Marquis Bey, and Deva Woodly. Our focus is the book’s third chapter: “For Our Sons, Daughters, and All Concerned Souls.”

In his lucid work The Making of Black Lives Matter, Christopher Lebron gives an account of the intellectual context from which the Movement for Black Lives sprang. Far from being only a response to the brutal police and other state violence that threatens the lives and inhibits the freedom of black people, the movement is an expression of black political thought that has been present in America for centuries. In the third chapter of this illuminating examination “For Our Sons, Daughters, and All Concerned Souls,” Lebron advances the argument that black women thinkers, in particular, provide a perspective that calls America think not only of the fraught category of “citizen,” which has been limited by ideologies of white supremacy, patriarchy, and heterosexism in both law and custom throughout the history of the nation, but of the oft disregarded yet politically essential category of the person.

In the introductory section of the chapter, Lebron recounts the story of Eleanor Bumpurs, a mentally ill, elderly black woman who was killed during a police raid of her apartment. Though the police were familiar with Bumpurs and understood that she was affected by severe mental illness, when they approached her door, drilling holes around the lock so that they could peer in, and found her naked and holding a knife, six officers stormed her apartment, unloading nine shotgun pellets into her chest. Although there are many questions one could and should ask about the excessive and lethal use of force, Lebron is most struck by the dehumanizing terms that the police used to describe Bumpurs and justify their actions. Bumpurs was described as a “300-pound woman” who “suddenly charged one of the officers with a 12-inch blade, striking his shield with such force that it bent the tip of the steel blade.” But, as Lebron points out, “Eleanor Bumpurs was not a 300-pound force of nature. She was a black woman. This transformation of a black human into a dangerous beast was not the first, and eerily anticipated many other instances” (70).

Indeed, the post-mortem transformation of a black person into a dangerous beast clearly in need of taming or killing is the modus operandi of the police (and the state in general) when they are called on to justify the violation, degradation, and murder of black people. Eric Garner was monstrously huge, which is why his detention for selling loose cigarettes required a lethal chokehold as he begged for his life. Tamir Rice was a 12-year-old who wore size 34 waist pants, so obviously there was no way for police to ascertain he was a child, though he was playing behind a youth community center. Michael Brown, though he possessed no weapon and was the same height as the officer who gunned him down, was deemed by his murderer “a demon” and commenter Ben Stein declared he “wasn’t unarmed” but was armed with his incredibly strong, scary self.” Renisha McBride, a 19-year-old car accident survivor, knocked on the door of a house in the night, and was shot in the head through the door by a homeowner who found her knocking “violent” and perceived themselves to be in “immanent” mortal danger. In all cases, the hallucinatory fear of the black body, precluded even the consideration that the individuals whose lives were violently taken could be vulnerable, in need of care and concern.

The book points us to this simple, yet critical point: what if black people were regarded as persons? Lebron tells us that this essential inquiry arises most powerfully from the political thought of black women, but I submit that he misses why this is so. Lebron argues that Cooper and the prominent founders of the Movement for Black Lives, Alicia Garza, Patrisse Cullors, and Opal Tometi, are all motivated by the conviction that “black women are worthy humans — their skin color was not a warrant for dehumanizing them; their sex was not a reason for rendering them invisible, mute, usable.” This is indeed so, but the call that arises from this conviction is not that their “differential treatment requires correction in favor of their humanity” (83) as Lebron argues. Instead, it is something more profound than the classically liberal call for inclusion in equality; it is the reevaluation of usefulness of the terms of human and equality as abstract universal signifiers.

Lebron correctly situates the heart of the contemporary Movement for Black Lives in the political thought of black feminists but he misinterprets their call. Anna Julia Cooper, Audre Lorde, the authors of the Combahee Statement, Hortense Spillers, Patricia Hill Collins, and Kimberle Crenshaw, and contemporary movement activists do not call for the centering of the multiple jeopardy of black women, femmes, and trans people because they wish to strike race, sex, and gender-identity from the list of identities on the basis of which one can be excommunicated from the political community and, indeed, robbed of life, but instead because black women have always taken the person – the structurally situated and culturally socialized subject who lives in the material world – as the starting point of their political thought. The person, in the black feminist sense, should not be confused with the most familiar figures of political philosophy — the individual, the citizen, or the abstract universal human. The person is, instead, the breathing body who suffers, who is trapped, as Eleanor Bumpurs was in both the structures that create black women’s disproportionate poverty and the emotional devastation of the grandmother who, suffering from mental illness, is compelled to encapsulate her own feces in jars. The person needs not only or even primarily equal rights and regard, but centrally compassion and care.

Lebron knows and states that in the incisive political critique of the black women thinkers he examines, “liberation… becomes a matter of our inner lives being sufficiently unshackled from the invasion of dominant expectations and manipulations” and that what is at issue is the “freedom of bodies and the liberty of the souls and minds in those bodies (93-94)” that have been “erased from the frame of our democratic concern,” but I longed for him to push these insights further, to interrogate and reckon with what this call for liberation over and above, indeed, perhaps instead of equality, might mean for how we conceptualize democratic politics.

Deva Woodly is an Associate Professor of Politics at the New School.