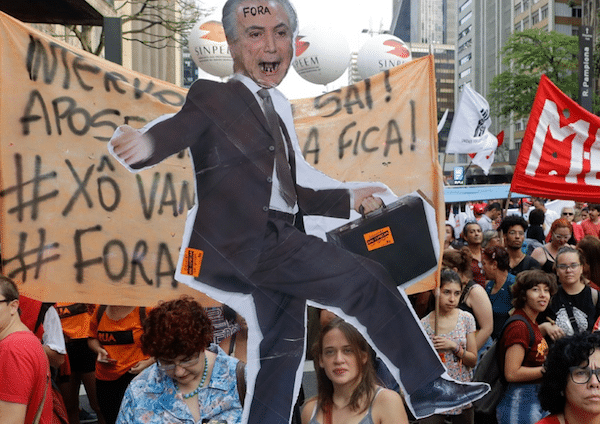 FACT NOT FAKE: Demonstrators protest against pension reforms proposed by the government and holding an cutout of President Michel Temer, 10 days ago

“Fake news” may have shot to prominence in 2017, courtesy of Donald Trump, but the power of the corporate media to mislead, misinform and under-inform for political purposes — usually to protects the interests of those who control the media and their powerful allies — has deeper roots.

And when deployed in Latin America, it has had serious consequences for ordinary citizens, as a look at three countries reveals.

In Brazil, privately owned news media, including O Globo, the second-largest commercial TV network in the world, supplied wall-to-wall coverage of the anti-government rallies in 2016 against President Dilma Rousseff.

The private media and right wing labelled her the head of the snake of Brazil’s corruption, despite her not being implicated or investigated for corruption. Instead she was accused of “budget manipulation.”

Michel Temer became president without being elected and quickly set about implementing hard-line austerity measures for which there was no popular support.

In contrast, when a nationwide general strike against austerity took place in April 2017, supported by millions of workers, the media coverage could not have been more different. What was reported was not the numerically massive strike but rather “demonstrations, protests and vandalism,” according to one journalist.

A United Workers Centre (Central Unica dos Trabalhadores, CUT) spokesperson also noted that “strikers and demonstrators were never interviewed. Our arguments for the general strike were never heard. The mainstream media clearly had an editorial tendency to discredit the strike.”

At the same time Brazil’s privately owned media ignored Temer’s acknowledgement in September 2016 of why Dilma was driven from office.

While addressing a meeting of U.S. business leaders and foreign policy experts, Temer admitted that it was Rousseff’s opposition to privatisation and greater austerity being urged by his party and its big business backers that triggered the impeachment process, not supposed “budgetary crimes.”

Most recently, some of the these media are implicated in the desperate attempts by Brazil’s right wing to stop former president Luiz Inacio Lula from standing in the next presidential election in October.

According to Lula’s defence lawyers, who include British-Australian Geoffrey Robertson QC, “constant leaks of baseless information keep on appearing in the press intended to demonise Lula or his group. None of this information can be proven, but it is leaked and appears in the press over and over again until the person is found guilty by the population.”

Turning to Honduras, in 2009, a military coup brought down the progressive democratic government of President Manuel Zelaya. The business-owned media aligned itself with the coup, providing favourable publicity and support.

The coup was widely condemned by governments across Latin America, the EU, the Organisation of American States (OAS) and other regional blocs.

In contrast, in the U.S., Barack Obama and Hilary Clinton refused to call the political crisis a military coup. The subsequent elections included a media blackout and targeted pre-poll assassinations of opposition leaders. No international institutions monitored the elections.

Today in Honduras news media is still concentrated in the hands of a powerful business elite. Community radio stations have an ambiguous legal status, exposing them to harassment, particularly when they report opposition views.

According to Reporters without Borders, “The level of press freedom is still sinking in Honduras. Journalists continue to be the targets of judicial proceedings, violence and murder, reinforcing a climate of fear and self-censorship that has worsened under Juan Orlando Hernandez, the president since January 2014.”

In doing so, he ignored poll observers’ findings and calls for a new election by members of the U.S. Congress and the opposition Honduran Alliance Against Dictatorship party.

Needless to say, Fox News provided a narrative that supported Hernandez, although even The Economist reported both vote-rigging plans before the election and a vote surge for Hernandez “after a lengthy and still unexplained election-night delay in the results being published by the country’s Supreme Electoral Court (TSE).”

In Venezuela we see much the same picture where a powerful business elite dominates the country’s news media and sets the agenda actively engaging in politics against the current government led by Nicolas Maduro and perhaps in the hope of creating conditions for a future coup.

Four years after Hugo Chavez’s election in 1998, the implacable hostility of the country’s business elite, in alliance with the U.S., led to the right-wing opposition launching a coup in 2002, which was fully supported by the privately owned media.

This helped skew media coverage worldwide, since international news agencies typically depended on local journalists and those worked mostly for the private media complicit in the coup.

In Britain, the mainstream media had reported little about Chavez’s achievements since 1998 and fell readily for the local narrative of an oppressed people rising up against an authoritarian military leader.

British corporate media reporting included a host of inaccuracies and mischaracterisations, such as labelling Chavez “not so much a democrat as an autocrat” and a “playground bully.”

Two days after the coup a popular uprising restored Chavez as the democratically elected president, but the right-wing opposition’s narrative has persisted and has been picked up and amplified by international media, particularly in the U.S.

Much of the mainstream international media, has, characteristically, ignored the criminal arson, street barricades and attacks on creches and hospitals, which have led to a large number of these deaths.

Every loss of life is a tragedy and those responsible for each death must be held to account. Venezuela’s government is pursuing cases where security force members have been suspected or positively identified as perpetrators of unlawful killings and arrests and indictments have already taken place.

Despite this, the overriding impression provided by international media is that violence in Venezuela originates from one side only of the country’s deeply polarised political divide and can be taken as a green light by extreme sections of Venezuela’s right wing to use violence without international condemnation.

News stories need careful reading to work out whose interests are being served.

The distorted and repressive narratives of the mainstream media seek to undermine those struggling for social justice in Venezuela, Brazil, Honduras and other Latin American countries and to preserve the privileges of the powerful.

All the more important, therefore, is the building of international solidarity rooted in understanding the actual experiences of those struggles.