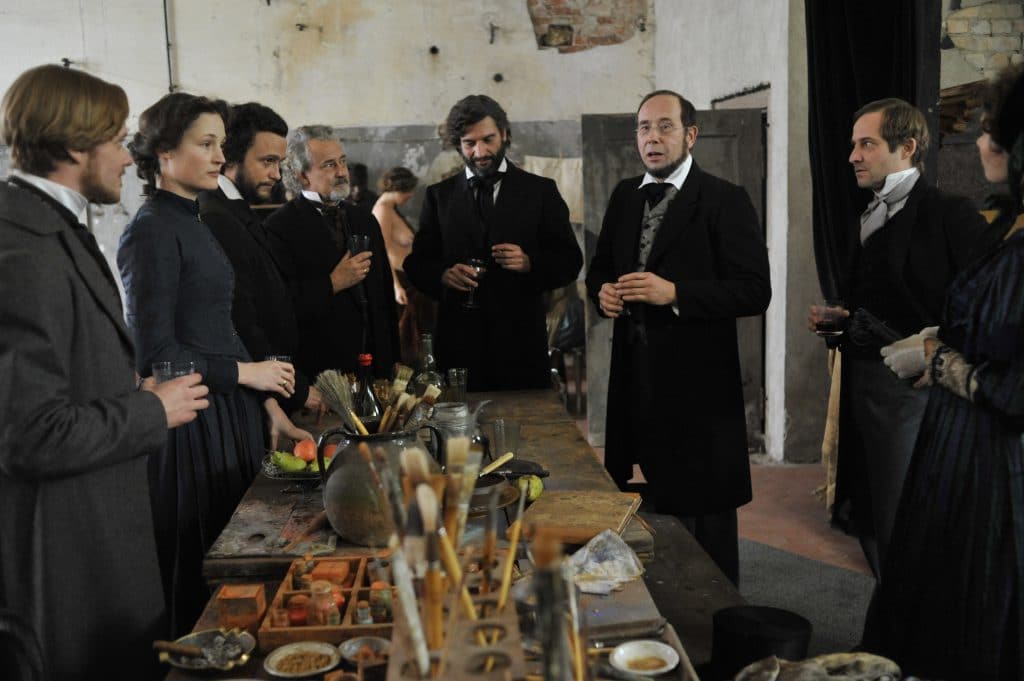 The Young Karl Marx directed by Raoul Peck 2017 fuses the idealist with the realist beginnings of a youthful Marx. He was the first to argue the case against capitalism’s production of a “plethora of misery.”  Marx and Friedrich Engels brought into existence a lasting, active philosophy committed to human dignity and social justice. Marx and Engels are two ripples of intellect that mutually come together as one. Together they changed the entire discussion between real time circumstances and air-filled theories.

The pillars of capital were shaken in 1848 with the arrival of the subversive Communist Manifesto, written by Marx and Engels. Behind the Bible, the Manifesto is the most widely read book on the planet. Marx and Engels sought to pull veil from the eyes of workers around the world and rid them from oppressive conditions by forging a unity, a deep solidarity. As a result, the myths of capitalism were unmasked.

The film is jovial with the spirit of a filmmaker who has known the harms of a corrupt heartless global system that continues to alienate and exploit every aspect of living. Peck counters the Hollywood film model where the only thing that progresses is action, and instead builds a storyline that develops with the evolution of ideas.  The Young Karl Marx is a brief whisper of a film that invites the viewer to follow up with their own investigation. It is a film meant not to be a blockbuster, but to be digested at any given time—with no expiration date.

The brutal persecution by merciless landowners of the peasantry as they collect wood from the ground is a haunting scene which ignites Marx’s indignation. The prohibition to collect wood from the ground was as disturbing as the water wars in Bolivia, where Indigenous were band from collecting rain water without a permit in 1999. (see Jim Schultz, “The Politics of Water in Bolivia,” The Nation, January 28, 2005.)

This film could only have been made by someone who believes deeply in liberation and comprehends exploitation viscerally, as part of their own experience. Born in Haiti, director Raoul Peck is no stranger to the existing social stratification in the global south. Elements of youthfulness, debate, inquiry, philosophy, sociology, politics and economics make Marx a twelve angle Inca stone: a multi-dimensional thinker who’s approach to history is drawn and supported from numerous disciplines.

Rejecting Hollywood’s typical formula of sensational adventure and escapist profiteering, Peck gathers the emotions, feelings and intellect of the characters, to demonstrate the power and potential awakening of consciousness that might bring us closer to comprehend and overcome the malevolent workings of the regime of capital. Why would Marx dedicate and sacrifice an entire lifetime researching, studying, and denouncing the philosophy of an economy that is structured around profit over people? How else could today’s generation come to understand Marx if not with the aid of a visual narrative? The Young Karl Marx is a timeless film that cuts across layers of philosophies; and with the aid of Marx’s critique, clarifies the fact that most are no longer valid.

Peck appropriately acknowledges the role of Marx’s spouse, Jenny von Westphalen (and their daughters), as the cornerstone of Marx’s life. Jenny was of the upmost importance in shaping the battle to liberate left thought from what Marx described as “the icy water of selfish calculation of the bourgeois”. Peck also does not fail to leave moments of doubt out of the film. This provides many insightful lessons for any progressive movement or individual about fissures that can arise from an unrealistic analysis during a debate. For example, those who just want to ‘get along’ and rely on diffuse notions solidarity, or those who take extant material conditions of ‘what is’ as a point of departure.

In one scene, Wilhelm Wietling, a charismatic speaker, states that when critique runs out it ends up devouring itself. It is probably one the most relevant points made in the film for contemporary movements. One also finds an implicit critique of postmodern ideas throughout the film. Most fall under what Marx described as philosophers merely interpreting instead of transforming the world. For Marx, it was critical go beyond mere contemplation: the dialectic of theory and praxis being a fundamental strategic principle of organization and action.

The way Peck presents Marx resembles the work of a cartographer: by mapping out the historical development of left thought younger generations are able to find their place in the long history of struggle against capital, and conceive of new ways forward. For Peck the film is an “instrument of analysis.” He presents Marx, Jenny, and Engels in highly insightful and creative ways, multiplying the energy and intensity of the dialog by drawing on the extensive correspondence between Marx, Engels and many others. Indeed, Peck largely avoids Marx’s many biographers and instead highlights Marx’s writing and letters.

The film is of course not a recipe or blueprint for change. Nor should we have expected Peck to convey volumes of history and theory in a two hour film that is also entertaining. Its success derives from Peck’s ability to demonstrate the relevance of Marx for the present. The Young Karl Marx is available to critique, to study, and to question. Despite being derided by mainstream media as a “buddy film,” a “bromance,” etc. (to be expected), it joins a growing field of films informed by the urgency of resistance, and focused on finding ways to promote real dialog about the continuous growth of poverty and the sharpening of class antagonism.

This review is dedicated to Film scholar Teshome H. Gabriel.