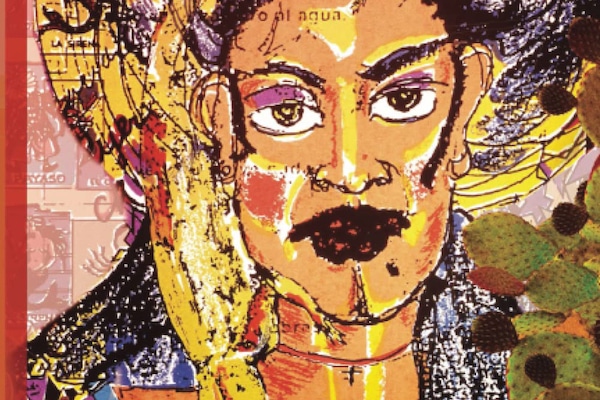 Vibiana Aparicio-Chamberlin’s poetry in Chicana on Fire (2022) is testimonial and collective. She was born and raised in Boyle Heights, California. She earned an M.A in Theater Arts from California State University, Los Angeles. She is an activist, writer and a visual and performing artist. Aparicio-Chamberlin has been published in several literal and art magazines. In her preface to Chicana on Fire  she describes her childhood memory “as a need to shout out her grievances, for this I was called a bad mouth, a grosera. By today’s standards I would have been considered a critical thinker.” 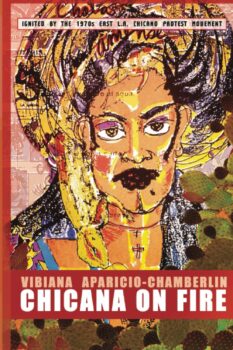 Now you turn your eyes away from me.

Every time you refuse tenderness, your heart dies—Loveless, unrequited.

In ‘Don’t Open the Door,’ Aparicio-Chamberlin brings us close to the frightful drama of an undocumented family. The poem starts as a letter from the teacher to the mother of Alejandro warning her to tell her son not to open the door, to be quite and stay still if he hears a knock. The mother’s consecutive instructions of don’t do this and don’t do that to her child string like beads on a rosary, one right after the other.

The 1970 sheriff assault on the Chicano peace protest against the Vietnam War at Laguna Park in East Los Angeles led to Aparicio-Chamberlin’s poetry of protest. Her indignation fired up a series of poems addressing police brutality. In Attacked, Tear Gassed, And Bludgeoned By Sheriffs At the National Chicano Moratorium Against the War In Vietnam East Los Angeles, August 29, 1970, Aparicio-Chamberlin reveals her outrage and determination to never forget the life changing incident. She writes, “I froze; lost my speech. I cried inside my head.” Her invisible tears were fossilized like amber in this poem.

Aparicio-Chamberlin’s poems and stories capture what at times other forms of art cannot; the breath of sound united with words that rhyme out the soul of her experiences. Her poems are poetic documentations of life.

For Kenyan writer and scholar Ngũgĩ wa Thiong’o “content is ultimately the arbiter of form.” The content in Chicana on Fire, relampaguea (flash lightning) is like Pablo Neruda’s Canto General; a Latin American continental protest. Aparicio-Chamberlin’s content departs from her commitment to rescue and preserve memory that allows her community the space to evaluate its circumstances as actors themselves in writing their own history.

Palestine, Haiti, Vietnam, hence the Global South is part of her political poetry. In Oh, Palestine  Aparicio-Chamberlin wishes to build a perfumed bridge to be close to her Palestine sisters in struggle. In her poem dedicated to Haiti, she describes her desire for a small plot of land for the poor, and “No more quaking only the Earth stretching and scratching to loosen the soil for beans and corn to grow for you.”

Aparicio-Chamberlin’s short story ‘The Bishop’s Ring’, a vender catches sight of the bishop in front of the Los Angeles Cathedral on Grand and Temple. She rushes across the street and extends the bishop a handmade clay rosary as a gift. The bishop ignores the gift and instead puts out his “manicured hand” with a ring to be kissed by the vender. She hesitates and lightly touches the bishop’s ring with her lips. He moves away with no blessing and no kind gesture for this hard working woman. Aparicio-Chamberlin’s keen sensitivity captures contradictions in the making. Class consciousness is layered in-between many of her stories and poems. She is vivid in her description of the vender and stealth with her observation between those who hold power accompanied with arrogance and those from below; the working class.

Chicana on Fire rescues the 1970s internationalism solidarity with the Third World back to the reader. Space, place and geography are continuous references braided together in her work. In ‘We Didn’t Cross the Border, the Border Crossed Us’, Aparicio-Chamberlin traces the constant overgrowth of a border scar made by U.S. imperial ambitions and the oppressive border (racist) measures promoted by ex-presidents, James Polk, Bush, Clinton, Trump and Obama towards Mexico and Latin America. In this same poem Aparicio-Chamberlin reminds the reader of the impact of steel walls with razor ribbons on wildlife, on both sides of the border.

These series of stories and poems are written with fire and courage. Aparicio-Chamberlin brings forth a ballad of cantos dedicated to love and to promote discussions. Chicana on Fire contains the ganas (will) to build a different promising world for all.