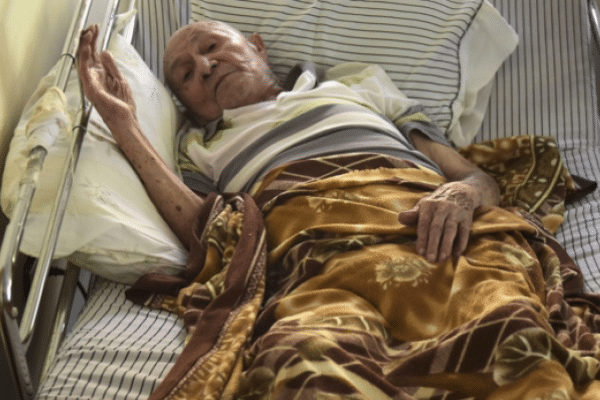 93-year-old World War II veteran Antonio Morales rests in a single-story concrete home with no running water, in Corozal, Puerto Rico. Morales is one of thousands still waiting for water and power as the six-month anniversary of Hurricane Maria approaches

PUERTO RICANS marked six months today since the formation of Hurricane Maria, which devastated the island, causing about $100 billion (£72bn) in damage.

Half a year on, many residents of the U.S. colony are still without running water or electricity.

Only a fraction of the $23bn (£16bn) set aside by the United States Congress has actually been spent in Puerto Rico and leaders on the island denounced the sum itself as woefully inadequate. About $1.27bn (£910 million) has been received for food and just $430m (£308m) to repair infrastructure.

A $4.7bn (£3.4bn) loan approved last year for the U.S. states of Texas and Florida and the colonies of the U.S. Virgin Islands and Puerto Rico was reduced by the Treasury Department last month to $2bn for Puerto Rico alone, none of which has been given out.

And programmes funded by $6bn (£4.3bn) of Federal Emergency Management Agency (Fema) money have yet to reach thousands of Puerto Ricans, many of whom live in desperate conditions.

Tens of thousands of residents are still waiting for permanent shelter, water or power as the next Atlantic hurricane season approaches.

Puerto Rican officials have said that the U.S. government is neglecting the colony, while Washington has blamed the island’s people themselves for delays in funding, although it has not been specific.

Meanwhile, the island remains mired in roughly $75bn (£54bn) of debt, half of which is interest and almost all of which is owned by giant “vulture” hedge funds that specialise in wringing money out of poor countries and municipalities to line the pockets of their wealthy investors.

Former U.S. president Barack Obama forced a set of punishing austerity measures on the island and the devastation left by Maria has boosted disaster capitalists who insist on privatising the struggling publicly owned electricity utility Prepa.