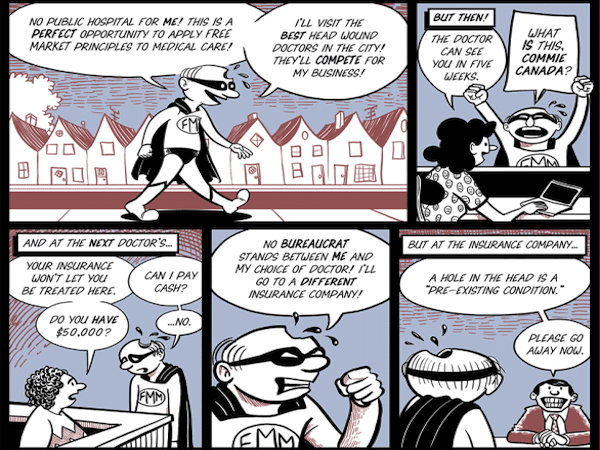 This is the second part of a series (read part 1) 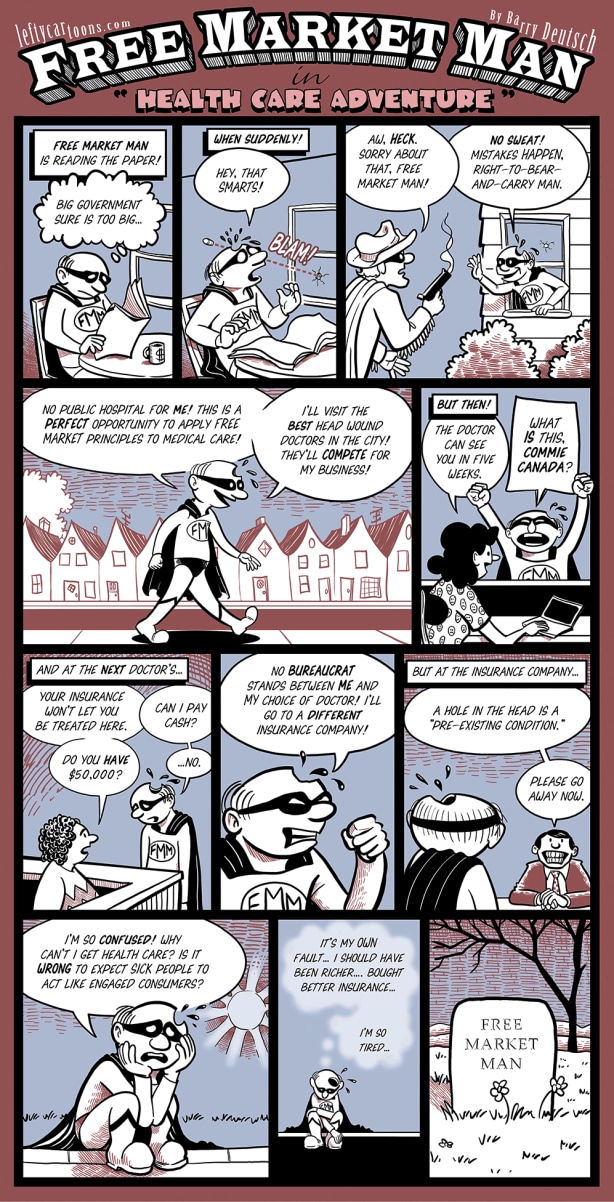 The dystopia of the American healthcare system certainly invites a utopian response—a ruthless criticism as well as a vision of an alternative.

As I showed last week, the left-wing response involves a critique of the conditions and consequences of the capitalist organization of U.S. healthcare and the fashioning of a radical alternative. Single-payer, which uses tax revenues to finance the purchase of adequate healthcare services for everyone, is one possibility. On top of that, it is necessary to expand the diversity of healthcare providers, which would include more democratic, cooperative or worker-owned healthcare enterprises.

That’s how activists, educators, and policymakers informed by heterodox economics can begin to rethink the U.S. healthcare system. What about mainstream economics?

Given the persistent attacks on and attempts to replace Obamacare by Republican legislators—against a “government takeover” of healthcare in the name of “free markets”—one would expect mainstream economists to provide a theoretical justification based on their usual utopianism—of an efficient allocation of scarce resources in an economy characterized by private property and individual decisions in unregulated markets.

However, as it turns out, they can’t. And that’s all because of Kenneth Arrow.

In Econ 101, students learn that market economies allocate scarce resources based on the forces of supply and demand. In most markets, producers decide how much to offer for sale as they try to maximize profit, and consumers decide how much to buy as they try to achieve the best standard of living they can. Prices adjust to bring supply and demand into balance. Things often work out well, with little role left for government. Hence, Adam Smith’s vaunted “invisible hand.”

Yet the magic of the free market sometimes fails us when it comes to health care.

Mankiw, who is known to celebrate free markets in everything, is forced to allow for an exception when it comes to healthcare. (Fellow mainstream economist John Cochrane, in a sharp riposte, argued that “For once, I think Greg got it wrong.”) 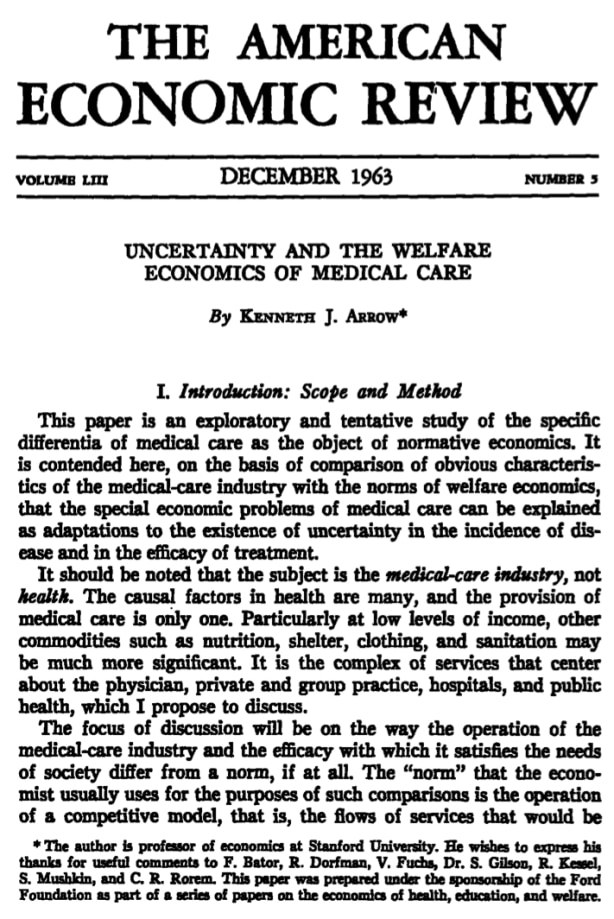 The reason is because, back in 1963, future Nobel Laureate Arrow published “Uncertainty and the Welfare Economics of Medical Care.” Mankiw’s column (and the longer treatment for his textbook [pdf]) is basically a restatement of the issues raised by Arrow over a half century ago.

According to Arrow, healthcare is characterized by a set of “special features,” all of which stem from the “prevalence of uncertainty.” These include the following:

In consequence, the healthcare industry cannot be expected to operate along the lines of, or to deliver the same results as, the canonical neoclassical model of perfect competition.

It is the general social consensus, clearly, that the laissez-faire solution for medicine is intolerable. . .

The logic and limitations of ideal competitive behavior under uncertainty force us to recognize the incomplete description of reality supplied by the impersonal price system.

Neither Arrow nor Mankiw suggests what the alternative is. But it’s clear that, from the perspective of mainstream economics, healthcare cannot be shoehorned into the neoclassical model of perfect competition they use to analyze all other commodities and markets. What we can say is their theory of the economics of healthcare leaves open the possibility of considerable extra-market intervention and regulation.

Healthcare is where the utopianism of neoclassical economics fails.

But then we can ask, where does that utopianism not fail? Why should it hold any better when it comes to other capitalist commodities, such as labor power, money, and land? And, if it does not, then neither the modes of analysis nor the policy conclusions that are central to mainstream economics retain any validity.

In my opinion, that’s why the issue of utopia and healthcare is so important.