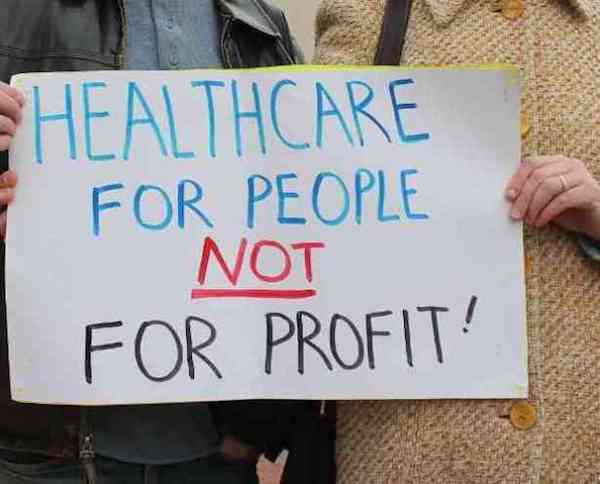 This is the first in a series of blog posts on the utopian dimensions of healthcare.

I’ve written quite a bit about the U.S. healthcare dystopia over the years—including a seven-part series back in 2016.* But I haven’t yet addressed the utopian dimensions of healthcare reform.

The appearance of the new issue of Jacobin Magazine, titled “The Health of Nations,”  is a good occasion to start that discussion. Adam Gaffney starts with much the same question that provoked my own series of blog posts: “if American health care used to be so much worse, why is it in crisis now?”

In part because, despite such wide-ranging reform, the system’s injustices remain unresolved, pervasive, and deadly.

The figures tell the story. Even without Republican rollbacks, twenty-eight million have no insurance, and, according to the Commonwealth Fund, some forty-one million are underinsured. A substantial portion of the nation—predominantly those of low and middle income and disproportionately people of color—cannot afford to see doctors, pay for medicine, or go to the emergency room.

Families who bought silver plans on the Obamacare marketplace still have $8,292 deductibles, but less than half of American households can cover even a $4,000 deductible. Patients take twice-a-day medications only once, skip doses, or fail to ll their prescriptions to save on co-payments. And of course, people die — tens of thousands of people a year—because they lack coverage.

But the crisis in American health care isn’t simply that the ACA didn’t go far enough: it’s that there’s no ACA 2.0 available to finish the job. Real progress has been made, but the incremental reforms left us with a deeply inhumane system.

The problem, as Gaffney sees it, is that

the Right is on the prowl, offering a slew of tired, malicious nostrums about personal responsibility, while liberal reformers have mostly run out of ammunition. But the Left has not, and single payer is now the only potent policy weapon still on the table.

I agree that the Right is attempting to dismantle many of the supports and safeguards, however limited, that are already in place. And liberals simply have nothing new to offer. But, beyond that, should the the utopian horizon for healthcare reform, at least from the Left’s perspective, be limited to Medicare-for-all?

The case Gaffney makes is quite persuasive:

Almost everyone—sick and well, insured and uninsured—has something to gain from this system. Single payer’s universalism is its strength, and the reason we can win it. But the Medicare-for-all movement is both a means and an end: it will clearly make for a happier and healthier nation, but it can also can become a unifying issue within a larger egalitarian political project at a moment of political crisis.

The universalism, I concur, is its strength—much like Social Security, which represents a collective bond whereby current generations of workers contribute to supporting previous generations who are now retired. Single-payer is the use of tax revenues, levied on individuals and corporations, to finance the purchase of adequate healthcare services for everyone. And, yes, it certainly can serve as a key issue within a larger egalitarian project.

But the Medicare-for-all proposal only gets at how healthcare is financed, not how it is produced or provided. It substitutes single-payer for private insurance and individual payments (for copayments and deductibles, and absurdly high expenditures for those without insurance). But it still leaves the mostly profit-driven system of U.S. healthcare services (along with hospitalization, pharmaceutical drugs, nursing homes, rehabilitation facilities, and so on) in private hands.

It therefore doesn’t include a critique of how healthcare is currently provided—by doctors, nurses, technicians, and other healthcare professionals and aides who are forced to have the freedom to work for large profit-making conglomerates—or any kind of proposal to expand the diversity of healthcare providers—whether at the local, regional, and national level, which would include more democratic, cooperative or worker-owned healthcare enterprises.

That’s a utopian horizon—covering both the financing and provision of healthcare—worth articulating and fighting for.

*The series started with the problem that, compared to other countries, Americans pay more but get less for their healthcare continued with an analysis of what workers are forced to pay to get access to the healthcare system, the role of healthcare insurance, pharmaceutical companies, hospitals, the double squeeze of declining real incomes and higher healthcare payments, and finally the case for universal, affordable, high-quality healthcare.