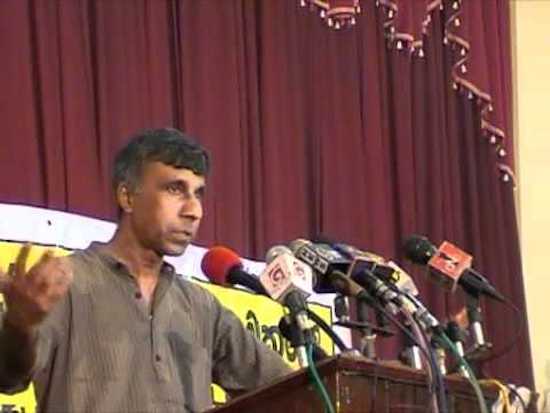 It is both an honor and a pleasure to be here at the event of marking the 75th Anniversary of the Ceylon Bank Employees Union. First, let me offer my heartfelt greetings to CBEU, its office bearers and membership. CBEU has had a proud and celebrated history of struggles that helped immensely to record so many victories to improve the conditions of the working class in general and the bank employees in particular.

The topic I have selected for my address this afternoon is “Public Banks in the Context of Subordinate Financialization.” In this talk my theoretical argument is based on Marx’s Theory of Money. However, Marx’s Theory of Money is not fully developed in his writings but has to be advanced on the basis of notes scattered in his work on economics. Recently a Greek economist who is at present working in the OAS, University of London, Costas Lapavitsas wrote a book entitled Profiting without Producing: How Finance Exploits Us. I must say at the outset, my talk is heavily based on his writings.

I structure my talk in the following manner. First I define key terms I use in the talk describing the main features of subordinate financialization. Secondly, I explained how financial sector is regulated in the last 4 decades. Thirdly, the some elements of restructuring the finance sector will be identified from a worker perspective.

First, what is meant by subordinate financialization? The period after 1970s have witnessed an unprecedented expansion of financial activity, rapid growth of financial profits, permeation of economy and society by financial relations, and domination of economic policy by the concerns of the financial sector. In this sense financialization appears to be coterminous with globalization and neoliberalism. As Duménil and Lévy puts it neoliberalism is the “restoration of the hegemony of finance”. However, we ought to emphasize the difference between finacialization and widely used term finance capital. Finance capital is defined as a result of merger between banking capital and industrial under the hegemony of the former. In the process of finacialization, the opposite has happened as industrial corporations began to depend more and more on their own retained profits. Moreover, some big industrial corporations enter into financial businesses. What actually happened in the process of finacialization is that every sector of the economy comes under the dominance and influence of the financial sector, in other words finacialization of the entire global economy. This may be explained by an extreme example. Humans from the earliest days used produce various kinds of cereals. They exchange them with other commodities or sell them in the nearby market. Although some important changes had happened, the basic relations of circulation remain intact. Finacialization has introduced new dimension to this process as the financial institutions began to use speculative derivative strategies in commodities markets.

As Lapavitsas has informed us, “financial institutions have sought new sources of profitability in personal income and financial market mediation”. To facilitate this process, it had been imperative to liberalize financial rules and regulation mechanisms. We witnessed that under Clinton administration Glass-Steagall Act of 1933 was repelled. Nonetheless it is not correct to say that liberalization of financial laws is the cause of financialization, but new legal structure has definitely facilitated the process. Under financialization, there has been an integration of a wider range of agents in financial markets and novel additions to financial instruments designed for “risk-sharing”.

In 2008, the world witnessed a severe financial crisis followed by a crisis in the real economy marking the end of honeymoon period of neoliberal globalization and financialization. The magnitude of the crisis led bourgeois governments of all varieties to intervene to make the house back in order. These measures included state take-over of big banks that nobody thought would fall. Some economists of the mainstream, such as Joseph Stieglitz came forward and proposed financial repression as a solution.

It is interesting note that the process of financialization in the context of neoliberal globalization have created a destructive creature like Godzila that cannot be controlled by human action. The drastic measures that were introduced and became effective in the 1930s and the aftermath of the World War 2 are no longer possible in the present context. It has made the economy so vulnerable to various forms of crises. This reminds me what John Maynard Keynes informed us in 1935. He said: “Speculators may do no harm as bubbles on a steady stream of enterprise. But the situation is serious when enterprise becomes the bubble on a whirlpool of speculation”. Hence, Lapavitsas opines: “The poor prospects of regulatory control and the failure of private banking have brought to the fore the issue of private property over financial institutions. If it is necessary to adopt a more interventionist attitude toward finance than merely setting a regulatory framework, then property rights over financial institutions ought to be considered directly.” So he suggests that credit should be treated as public utilities such as water and gas notwithstanding the fact that credit is not a normal commodity. Credit is a “set of economic relations based on trust and anticipation of returns”. How could we develop a system ensuring publicly managing the flow of credit to households and non-financial enterprises in order to achieve socially set objectives? Of course, we do not have complete answers to the above question but we have seen some lights to get an answer to this important issues have been thrown in the last decade or so. Most recent suggestions in this regard may be seen in the recent British Labor Party document entitled Alternative Models of Ownership, a report submitted to the shadow Chancellor of Exchequer. The document begins with an assessment of the current conjuncture as follows:

The economic system in Britain, in its current guise, has a number of fundamental structural laws that undermine economic strength and societal well-being. The predominance of private property ownership has led to a lack of long-term investment and declining rates of productivity, undermined democracy, left regions of the country economically forgotten, and contributed to increasing levels inequality and financial insecurity. Alternative forms of ownership can fundamentally address these problems.

These issues are all the more pronounced given the increasing levels of automation in our economy. Automation has an emancipatory potential for the country’s population, but the liberating possibilities of automation can only be realized–and the threats of increased unemployment and domination of capital over labour only countered–through new models of collective ownership that ensure that the prospective bene ts of automation are widely shared and democratically governed.

When Ceylon Bank Employees Union (CBEU) began a campaign against privatization of state banks, it may not have considered all these complex theoretical issues. Godzila is growing big in Sri Lanka in the context of subordinate financialization. The CBEU has long way to go confronting all the attempts of privatization and it should come with proposals for alternative system in association with its sisters and brothers in other sectors. This alternative ought to be designed ensuring the credit flow to non-financial institutions and households to generate a system that is just, democratic and humane.

Text of the key note address delivered at the event to mark the 75th Anniversary of the Ceylon Bank Employees Union (CBEU), on March 24, 2018 at the BMICH. Sumanasiri Liyanage is former teacher in economics, he can be contacted by e-mail: sumane_l@yahoo.com