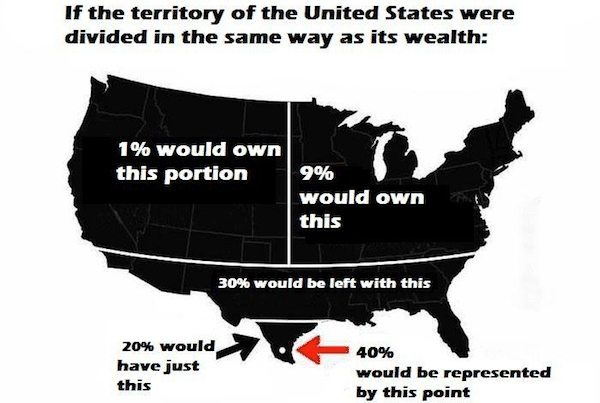 “The government of the rich, by the rich, and for the rich.” By replacing the term “people” in Abraham Lincoln’s well-known phrase with those who have real power in the United States, we gain a more exact idea of how U.S. politics and society work.

Progressive thinkers have been warning for decades that it is money that pulls the strings in Washington; while the democratic system, since the country’s founding until today, is a mask to conceal the interests of the rich minority.

The striking thing is that this idea has now spread to sectors of the U.S. intelligentsia that in no way could be labeled as leftist.

Interest in this issue has grown since the arrival of New York billionaire Donald Trump to the White House, and the implementation of his tax reform plan that benefits the mega-rich to the detriment of many low-income voters, who contradictorily put him in the Oval Office.

But the data has been in existence for some time. A study carried out in 2014 by Martin Gilens, of Princeton University, and Benjamin I. Page, of Northwestern University, demonstrated that elites always fare better than the middle class in political decision-making. (“Testing Theories of American Politics: Elites, Interest Groups, and Average Citizens,” Perspectives on Politics 12, no. 3.)

After checking thousands of legislative bills and public opinion surveys of recent decades, Gilens and Page found that any policy change with little support from the upper class has about a one in five chance of becoming law, while those backed by the elites triumph in about half of occasions, even when they go against majority opinion. The academics noted,

When a majority of citizens disagrees with economic elites or with organized interests, they generally lose. Moreover, because of the strong status quo bias built into the U.S. political system, even when fairly large majorities of Americans favor policy change, they generally do not get it.

This reality explains the difficulties the movement of young people in favor of gun control currently faces to obtain the support of legislators, who receive millions of dollars from the National Rifle Association and other conservative groups that consider carrying a rifle a symbol of the American way of life.

And the differences that are demonstrated in politics are getting bigger in the economic sphere.

The conservative Hudson Institute, reported in 2017 that the wealthiest 5% of U.S. households held 62.5% of all assets in the country in 2013, compared to the 54.1% they had three decades before. That is to say, the richest families are becoming even richer.

But even more noteworthy was the finding of academics Emmanuel Saez and Gabriel Zucman, who in their research on inequality found that the wealthiest 0.01% controlled 22% of all wealth in 2012, when in 1979 the figure was just 7%, according to a recent BBC report.

Such data shatters the myth of U.S. democracy, in which decisions must be made based on the view of the majority.

On the contrary, the United States shows the clear characteristics of an oligarchy, a system in which power is in the hands of a few people who generally share the same social class.

Elections in the United States: The Most Expensive Show in the World

However, the study by Gilens and Page does not go much further, and points out that “Americans do enjoy many features central to democratic governance, such as regular elections, freedom of speech and association.”

However, even those basic pillars of the U.S. system are foundering, and are not enough to convince anyone.

The last presidential elections showed once again how, due to the complicated U.S. Electoral College system, a candidate who receives less national support than his or her rival can end up the winner. Democrat Hillary Clinton secured almost three million more votes than Trump at the national level, and was still defeated.

Not only that, but in recent decades an organized plan has been carried out to make it more difficult for African-Americans, Latinos, and poor sectors to vote.

The reconfiguration of voting districts is a habitual practice that restricts citizen participation and guarantees the pre-eminence of the elites despite their numerical inferiority.

The financing of election campaigns, which in the end entails the support of legislators, further widens the gap.

This opened the way for the so-called super PACs, which are today the real protagonists of presidential and legislative elections.

According to official figures, more than 2.4 billion dollars were spent on the last presidential race, and it is estimated that an additional 600 million dollars was invested, the origin of which is unknown.

This reality sparked former president Jimmy Carter to lament that any candidate to the Presidency of the United States needs at least 200 million dollars to set foot on the path to the White House.

“There’s no way now for you to get a Democratic or Republican nomination without being able to raise $200 or $300 million or more,” Carter told Oprah Winfrey on her talk show in September 2015.

The book Dark Money by journalist Jane Mayer, which has become a bestseller, also clearly describes how the U.S. political system is dominated by dollars, which implies that even the most modest attempts to tackle climate change, gun control, etc., fail before the real power of the oligarchy.

Mayer destroys another thesis that sustains supposed U.S. democracy, claiming that the political thought of the elites and the middle class is very similar.

In her investigation, the journalist describes how huge fortunes, mainly of the conservative classes, are invested in intellectuals, think tanks and universities to elaborate and socialize their reactionary ideas, and that these are assumed naturally.

They even go so far as to hire “scientists” to counteract proven hypotheses such as the role of human beings in climate change or the damage to health caused by certain products.

Democracy Made in the USA

Despite the overwhelming evidence, Washington still tries to sell itself as a global reference of an open political system that guarantees the rights of its citizens.

“Democracy” is perhaps the most advertised export product under the Made in USA label. The United States has spent billions of dollars since the end of World War II to impose regime change and destroy any alternative project to that of neoliberal capitalism, based on the uniqueness and universality of its political model.

Continental institutions such as the Organization of American States (OAS) and the Summits of the Americas have in the political organization of Washington the yardstick to measure the rest of the countries and classify them as democratic or not, according to their rules.

However, U.S. elites can no longer deceive their academics or their own citizens, as they increasingly see through the blindfold imposed by the mass media. Will they manage to continue to fool the rest of the world?