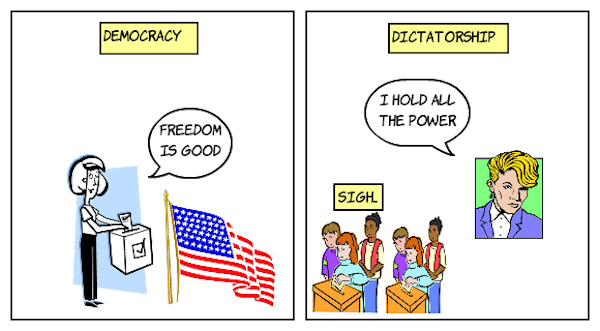 In 2017, the Economist Intelligence Unit (EIU) downgraded the U.S.  democratic system. The EIU has an annual Democracy index that provides a snapshot of global democracy by rating countries on five categories: electoral process and pluralism; civil liberties; functioning of government; political participation; and political culture. They are then classified into four types of governments: full democracy, flawed democracy, hybrid regime, and authoritarian regime.

The U.S. is rated as a flawed democracy—one having free elections but weighed down by weak governance, an underdeveloped political culture and low levels of political participation. According to Pew, Gallup and other polling agencies, there is a trust deficit between the American people and the government, which has a corrosive effect on the functioning of democracy.

There is also a growing trust deficit between rising powers in the international community and the U.S., and in fact EIU is not the only entity that has downgraded U.S. democracy. Another unlikely actor has also downgraded the U.S.–China.

He argued that the U.S. is not a gold standard  “democracy” or a “legitimate” actor in the international system, and condemned the American penchant for overthrowing foreign governments that defy Washington.

He continued: “To judge whether a country is democratic, one needs to see whether it adopts democratic systems at home and in international diplomacy.” Because the U.S. failed the “democratic” litmus test in the international system, Liu views the U.S. as only a “half democratic” country and therefore should not wag its finger at others for not being democratic or try to topple them.

This sentiment is echoed by a select few in the U.S. establishment. In a December 18, 2015, Foreign Policy article, Leslie Gelb, president of the Council on Foreign Relations, retired Lieutenant General Robert Gard, chairman emeritus of the Center for Arms Control and Nonproliferation, and retired Brigadier General John H Johns, professor emeritus at the U.S. National Defense University, called for U.S.-Russia cooperation in Syria and an end to the U.S. obsession with regime change.

The authors said: “In the past, Washington has tried to sideline dictators like Assad, Muammar al Qaddafi in Libya, and Saddam Hussein in Iraq. We have advocated democratic norms and human rights in those countries. The results: increased chaos and destruction, rather than a shift to the norms and aspirations for a democratic revolution.”

In the 2014 case of Eritrea, which has a border dispute with Ethiopia, the U.S. tried to sanction the tiny nation of 6 million people for “supporting terrorism” to appease Addis Ababa, which Washington sees as a partner in the continuing “war on terror.”

When the UN’s Somali-Eritrea Monitoring Group found no proof that Eritrea was supporting al-Shabaab, 14 out of 15 UN Security Council members indicated that they wanted to lift sanctions, but the U.S. vetoed the move. It then pushed to establish the UN Commission of Inquiry on Human Rights in Eritrea (COI) to investigate crimes against humanity and lay the groundwork for eventual regime change.

This prompted Redie Bereketeab, a senior researcher and associate professor at the Nordic Africa Institute, to decry the COI’s dubious research methodology. He says the UN commission gathered information from politically motivated and disgruntled government opponents, asylum seekers and neighboring countries that opposed Eritrea, while all the sources remained anonymous and the UN had no way of verifying their testimonies.

It is because of this that Bereketeab questions how individual rights can be protected if their collective security within a country and international norms of sovereignty, territorial integrity and national boundaries are violated.

Similarly, in the 2013, 2017 and 2018 chemical attacks in Syria, the U.S. narrative is one of the Syrian government gassing unarmed civilians that would provoke a fierce response from the U.S. and its allies, as moral guardians of the international human rights regime. Indeed, gassing innocent civilians is a war crime, and the duty is then to gather evidence for a prosecution, and if found guilty beyond a reasonable doubt, punish the criminal.

In the 2013 case of the chemical attack in rebel-held Ghouta, a suburb outside of Damascus, the evidence did not conclusively indicate which party perpetrated the crime. German newspaper Bild am Sonntag said German intelligence agency BND did not have absolute proof that the Syrian government was responsible but suggested it was likely culpable. UN Inspector Carla Del Ponte stated that the rebels might have also used sarin, but the evidence was “strong, concrete suspicions but not yet incontrovertible proof.” As such, it seems both sides had motivations to use them, but there was insufficient evidence for a “slam dunk” prosecution.

However, in the 2017 and 2018 attacks in Idlib and in Ghouta, it appears the rebels had more of an incentive to use them. The evidence was video footage solely provided by the UK/U.S.AID-funded White Helmets, which is embedded with the armed opposition with its attendant political agenda, similar to the Eritrea case. Both attacks occurred when the Syrian government was winning, rather than losing ground, which in political science literature is a key motivator for governments to attack their own people out of desperation.  As counter-terrorism expert Professor Max Abrahms observed, the structural conditions in this scenario are the exact opposite with Assad winning, so it was the rebels that had the strongest motive.

I did an interview this evening about #Syria with the Evil Empire. https://t.co/5htX53KzU3

As such, Abrahms sees no logic to Assad attacking his own people and risking international retaliation when he is actually winning the civil war. Moreover, the U.S. narrative of the Syrian government gassing its own people is further complicated by the fact that Saudi-sponsored Jaysh Al-Islam, the group working with the White Helmets in Ghouta to supply video footage of the recent attacks, was accused of using chemical weapons on Kurds in Aleppo in 2016. There exist other uncomfortable truths such as the underground tunnels under Ghouta that the armed opposition used to get in and out of the city, and the discovery of Jaysh al-Islam’s chemical weapons laboratory that mainstream Western media did not properly cover. And yet the U.S. is now agitating for attacks on the Syrian government despite inconclusive evidence that it committed the crime, which is similar to claims of a WMD threat to justify toppling Saddam Hussein and destroying Iraq in 2003.

Despite the cloak of pharisaical self-righteousness, the Washington establishment wraps itself in, once again people outside the Beltway see differently. In a 2013 Win/Gallup International poll that questioned more than 66,000 people in 65 countries about which country posed the greatest threat to world peace, the U.S. ranked number one at 24% of the vote followed by Pakistan at 8%.

By continually flouting international law, applying selective morality and double standards, weaponizing human rights issues, invading countries and destroying civilian lives, serving foreign government interests rather than the welfare of the American people, the Beltway oligarchs are taking America down the wrong path. Sadly, it is risking further distrust and polarization, and the eventual demise of U.S. democracy.

Dr. Christina Lin is a Nonresident Fellow at the Center for Transatlantic Relations at SAIS-Johns Hopkins University specializing in China-Middle East/Mediterranean relations, and a research consultant for Jane’s Chemical, Biological, Radiological, and Nuclear Intelligence Centre at IHS Markit.