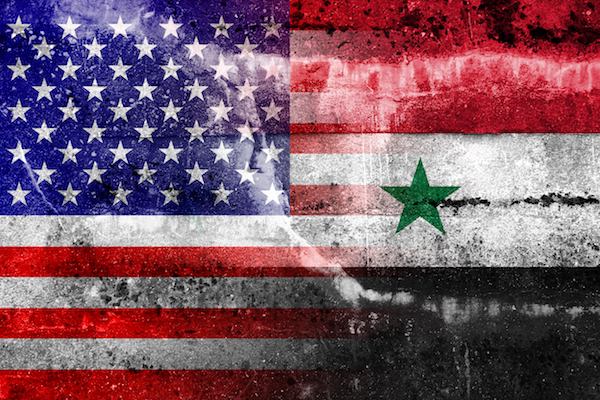 The Syrian government has won the war in the country. Two barriers to total victory remain. First, that there are pockets of rebels in the towns around Damascus and there is the province of Idlib which is controlled by rebels. Second, there are the tracts of land that are held by the United States (in the north-east), by the Turks (in the north), by Israel (in the south-west) and by Hezbollah (in the west).

It is only a matter of time before the Syrian government will be able to establish control over the suburbs of Damascus. One of these suburbs is the region of Eastern Ghouta, where there are currently accusations for the use of chemical weapons in the town of Douma. Health Clusters–affiliated with the UN’s World Health Organisation–have said that they have confirmed that there are 500 patients who have suffered from a gas attack (the death toll is 43). The Syrian government just took charge of a large part of this region, resettling thousands of people who had been displaced from there.

The fight over Idlib is going to be much more complicated. Turkey has eight monitors inside the province and has suggested that it would not allow a bloodbath in the town. But Turkey was given a free hand by the Syrian government for its campaign in Afrin; it is likely that Turkey will not interfere too much in the Syrian government’s move in Idlib.

Western media reports on the chemical attacks in Douma remain vague. The Wall Street Journal noted that it was not ‘clear who carried out the attack’, while the Associated Press said that it ‘was not possible to independently verify the reports’ that it had received. Even the World Health Organisation has had to rely upon its Health Clusters to provide reports. Details on who make up these Health Clusters cannot be obtained from the WHO.

The two groups that have been most certain that this was a chemical attack and that it was conducted by the Syrian government are the White Helmets and the Syrian American Medical Society. Both these groups are on the record as being against the government and seeking external intervention to help overthrow the government. Both the groups are closely allied to USAID, an agency of the U.S. government. The Syrian American Medical Society is run by a former USAID, while the White Helmets have been recipients of USAID funds. The news coverage has largely been driven by the views of these two groups.

Sober United Nations agencies have called for more investigations before they have defined the nature of the events in Douma. On Tuesday, the UN Organisation for the Prohibition of Chemical Weapons (OPCW) asked the Syrian government for authorisation to enter Syria and investigate the situation in Douma. The OPCW had set up a Fact-Finding Mission in 2013 as a result of a U.S.-Russian-Syrian agreement to destroy all chemical weapons in Syria. A year later, the OPCW had found that whatever had been disclosed by the Syrian government had been destroyed. Chlorine was outside the parameters of the UN search and destroy mission. It is a common chemical with many uses.

This February, U.S. Secretary of Defence James Mattis talked to reporters about chemical weapons use in Syria. There are certainly reports suggesting such use, Mattis said, but ‘We do not have evidence of it’. There was certainly evidence for the use of chemical weapons in Ghouta in 2013. What was not clear then, however, was who had used those weapons. The final conclusion by the UN in its 2013 report remains vague, ‘On the basis of the evidence obtained during our investigation of the Ghouta incident, the conclusion is that, on 21 August 2013, chemical weapons have been used in the ongoing conflict between the parties in the Syrian Arab Republic, also against civilians, including children, on a relatively large scale’. The passive voice is deliberate.

No Options for the United States

U.S. Ambassador to the UN Nikki Haley, after vetoing any action on Israeli violence in Gaza, made loud noises about Syria. But what can the United States do?

Arm the Rebels: It is now impossible for the United States to consider further arming of the rebels, given that the rebel groups on the ground have been ineffective against the Syrian government forces and those of its allies. One more anti-tank missile is not going to do much. Indeed, with the Russian and Iranian re-arming of the Syrian army, it would be easy enough to match that missile and go beyond it. Finally, that the U.S. has allowed the Turks to overwhelm the Syrian Kurds provides little certainty to the rebels that the U.S. actually will stand by them.

Limited Attack: In 2017, after an alleged chemical weapon attack, the Trump administration bombed a Syrian air field. It was supposed to prevent any further use of chemical weapons. If, for argument’s sake, the Syrian government did use chemical weapons on Douma recently, then it was not deterred by the 2017 U.S. tomahawk bombing run. No further limited attack would then be a deterrent. The entire theory of a limited attack is invalidated.

Regime Change: When the Russian air force entered Syria in September 2015, as our Tricontinental dossier on Syria shows, it made it impossible for the U.S. to engage in a full-scale war against Syria. Any such war will bring the United States into a direct and fierce confrontation with Iran and Russia. The United States is in no position to open an all-fronts war against Russia and even Iran.

In other words, the U.S. has no easy options for Syria.