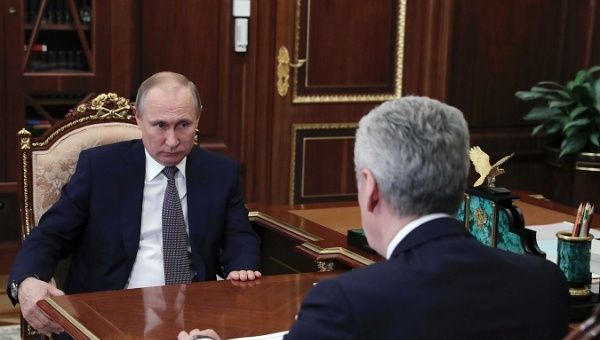 The United States-led military attack in Syria was a “an aggression against a sovereign state which is at the forefront of the fight against terrorism,” Russian President Vladimir Putin said in a statement Saturday morning, stressing that the multi-national strikes were not sanctioned by the U.N. Security Council and thus were “in violation of the U.N. Charter and principles of international law.”

The United States, United Kingdom and France fired over 100 missiles into Syria according to the Syrian government, Russia and the U.S. military. The Syrian army said that more than 70 missiles of the 105 fired at its structures were intercepted by its air defenses.

“The Organization for the Prohibition of Chemical Weapons sent its experts to Syria to clarify all the circumstances. But a group of western countries cynically ignored this, undertaking a military action, without waiting for the result of the investigation,” the Russian president lemented.

“Russia condemns with great seriousness the attack on Syria, where the Russian military is helping the legitimate government in the fight against terrorism.”

He added that such actions “further aggravates the humanitarian catastrophe in Syria” suffered by the Syrian people, indulges terrorists who have been “torturing the Syrian people for seven years, prompting a new wave of refugees from the country and the whole region.”

Putin concluded by saying that Washington and its allies have used such strategies of unconfirmed reports and attacks by local governments to launch interventions as was the case in Yugoslavia, Iraq and Libya

“Russia calls for an emergency meeting at the U.N. Security Council to discuss the aggressive actions of the United States and its allies.”

Hours after his comments, the United Nations said its Security Council was set to meet Saturday at Russia’s request to discuss the Syria airstrikes.