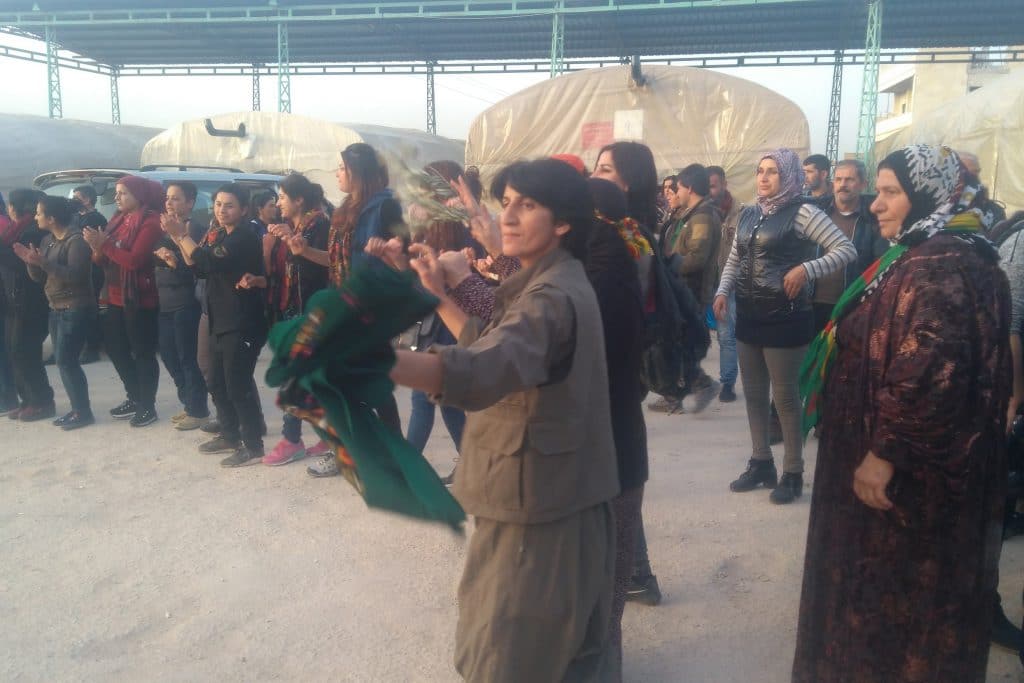 The first of two articles about a first-hand visit to Afrin, Syria. (Part two.)

I wrote this article on March 8. We were able to leave Afrin on the 9, because we have Lebanese passports. The inhabitants of the city of Afrin, almost all Kurds, are still living under siege, with only one crossing open. The Kurdish forces are not allowing Kurds to leave: “They have to stay here and defend their lands,” say political activists. On the 11, news started coming in about the last crossing’s imminent closure, as the Turkish army and its Takfiri paramilitary mercenaries encircle the city.

After three days of traveling by land across the Syrian north, we are now in Afrin, 10 kilometers from where the Turkish army is launching its attacks along with the remnants of ISIS, Al-Nusra and the Free Syrian Army, the Neo-fascists of the Levant.

We woke up in a house to which we had been led at the end of the night. “You are at the front line,” the generous owner told us, laughing. He was laughing but not joking. At night, electricity cuts turned the city dark. They hid the trenches dug around the building, the sandbags stacked on the first and second floors, and how the streets around the neighborhood looked like a bustling construction site. But there is no construction work going on here. To the north, west, and east of the city, the streets are being dug up and turned into trenches and tunnels. The enemy is expected to arrive soon, and such fortifications are the only way to stop the progression of the tanks. Meanwhile, the surrounding hills, which had been expected to be used to defend the city, were almost all in the hands of the Turkish army. “Nothing separates us from the Takfiris [radical islamist paramilitary forces] and Turkish army, but fields of olive trees and the fighters,” said one of our companions said, as missiles plummeted around the city.

More than 60 kilometers of lands, burnt and emptied villages, are now occupied by the Turkish army from the air and the Takfiri forces on the ground. They sit looted, their people killed or chased out. About 110 villages and three towns are now in their hands, which means the city of Afrin now houses almost 500,000 people, most of whom have been displaced from the occupied villages.

We entered Afrin two days ago from the only crossing that has remained open so far—the “Ziara” crossing, southeast of Afrin. The roads were flooded with trucks carrying rugs, pillows and mattresses on which children and the elderly were stacked. Between the engravings of brown and green rugs and brightly colored shawls, the faces of Afrinis appeared on the balconies and windows, watching the tide of the displaced from the West, the North, and the East—perhaps wondering when their turn would come. For more than four hours, we waited to find a house in which to stay. All the houses were filled with the displaced after the heavy shelling of the night before.

In the morning, a convoy of about 300 women moved to visit a neighboring village, challenging the enemy and supporting its people and urging them to stay. “Why are you going there?” I asked a woman from the convoy. “We go to support the villagers, as human shields,” she answered me, as easily as if she were discussing taking a Sunday family trip. This was an effortlessness I had witnessed before—with and amongst our peoples in Lebanon, and in Palestine—which reminded me suddenly and swiftly that under occupation people will resist. The equation was that simple.

While Kurdish fighters defend the front, and Popular Committees and various forms of support flow in from other Syrian regions, there regions has remained without the Syrian Air Force mounting any defense from the Turkish airplane attacks: “Without their (Turkish) airplanes, we would have won since the first day,” fighters here have said. It is clear the Popular Committees who joined the resistance here were more than welcome. But people say that the Syrian army’s presence is required. The need for the state’s intervention and for its military presence is clear. Afrin is Syrian land, and the Syrian state has the right and duty to defend its people and its lands.

There is an indisputable righteousness in the resistance of the region’s Kurds, who are fighting in defense of their lands. The presence of the state in Afrin would substantiate the Kurds’ belonging to Syria.

Things may look different from afar. But today in Afrin, between solidarity marches, commemoration festivals, and the daily delegations of human shields, there is a constant reminder and manifestation of how much this region cannot and should not remain alone. The Kurds should not be the only ones defending a land that is part of Syria, just as tomorrow, the Kurds should not fight alone when they will seek to liberate their lands from American occupation.

It is essential for the peoples of this region that Afrin does not become another Iskenderun.