The history of capitalism is actually a combination of two histories: it’s a history of employers attempting to hire workers and develop new technologies to make profits and expand the reach of capitalism; it’s also a history of workers banding together to improve wages and working conditions and imagine ways of moving beyond capitalism.

The World Bank’s World Development Report, currently in draft form, comes down firmly on the side of employers and their historical role.

The theme of the 2019 report is the “changing nature of work.” As envisioned by the reports authors,

Work is constantly being reshaped by economic progress. Society evolves as technology advances, new ways of production are adopted, markets integrate. While this process is continuous, certain technological changes have the potential for greater impact, and provoke more attention than others. The changes reshaping work today are fundamental and long-term, driven by technological progress, globalization, shifting demographics, urbanization and climate change.

Beneath the typically lofty but vague rhetoric, the two trends that haunt the report are the increasing gap between the top 1 percent and everyone else and the jobs that will be eliminated with the use of automation and other labor-saving technologies—leading to “rising concerns with unemployment, inequality and unfairness that are accompanying these changes.” 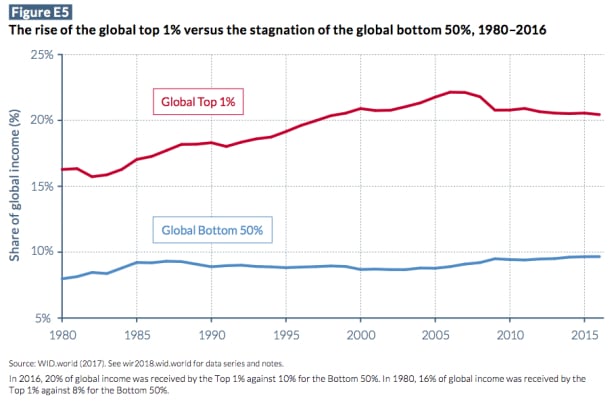 So what does the World Bank recommend for beleaguered workers, who are falling further and further behind the tiny group at the top and whose job prospects are threatened by new technologies?

Here, the World Bank reveals which side of history it’s on. It goes after the kinds of protections workers have long fought for, in both developed and developing countries, but which the world’s employers consider onerous and that make the price of labor power too high. In particular, the World Bank focuses on “high minimum wages, undue restrictions on hiring and firing, strict contract forms” that make workers both costly to hire and difficult to dismiss. In other words, the World Bank recommends exactly what employers have always wanted: flexible labor markets.

Rapid changes to the nature of work put a premium on flexibility for firms to adjust their workforce, but also for those workers who benefit from more dynamic labor markets.

That’s what the World Bank offers to the world’s employers (“flexibility”), coupled with an empty promise to the world’s workers (“more dynamic labor markets”).

But, as even the World Bank recognizes, such changes would leave the world’s workers even more destitute than they are right now. That’s why they shift the focus to a discussion of a a “new social contract. . .to promote fairness and equality of opportunity for people and firms.”

Once again, it’s exactly what private employers want—more workers with additional skills, a redistribution of monopoly rents, and a minimum income for their workers—as long as employers themselves don’t incur any additional costs. Employers retain their control over the surplus, and therefore over both jobs and workers. And the changes proposed by the World Bank promise them even more surplus as they use new technologies and change the nature of the work that is done for them.

What remains intact in choosing the employers’ side of history is that work, however much it is envisioned to change, is still done by employees for their employers. Governments and the rest of society are then charged with the responsibility of cleaning up the mess left by employers, including the dearth of required jobs and the mass of workers who are too impoverished and insecure to satisfy their own needs.

The idea that the worlds of technology and work are quickly moving far beyond the control of employers—well, that’s the side of history the World Bank remains incapable of comprehending.