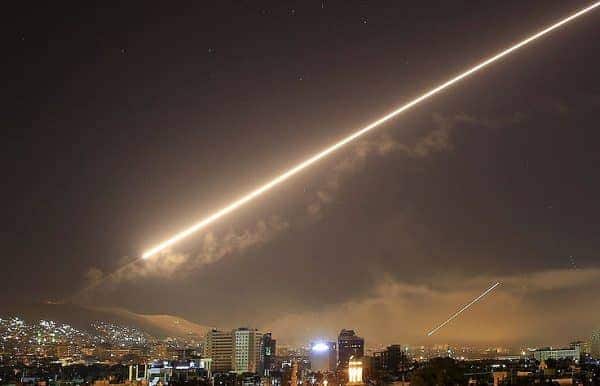 In the wake of the most recent USA airstrike in Syria, Professor Anne-Marie Slaughter, a former president of the American Society of International Law and U.S. State Department Director of Policy Planning between 2009 and 2011, took to Twitter to think through some of the legal and moral arguments justifying the use of force:

I believe that the U.S., UK, & France did the right thing by striking Syria over chemical weapons. It will not stop the war nor save the Syrian people from many other horrors. It is illegal under international law. But it at least draws a line somewhere & says enough.

Some aspects of this point are more persuasive than others. For example, the unlawfulness of the strikes both in regards to international and, to a lesser extent, to U.S. constitutional law is difficult to contest, and the USA in particular has not even tried to articulate a justification under international law, even though its language is reminiscent of invocations of armed reprisals. Moreover, as critical legal scholars we are comfortable with the idea that the international legal order is not a just one. However, our agreement with Slaughter ends here.

Contrary to Slaughter’s assertions, the problem of the Charter is not that it restricts unreasonably the use of force by hegemonic states, but exactly the opposite. As Anne Orford further argued it is particularly ironic that liberal defendants of the rule of law domestically become notoriously flexible about the same principle when it comes to the use of force abroad. Moreover, as others pointed out, Slaughter’s is a very odd position to take. This use of violence is not only unlawful, but also, as Slaughter admits, ineffective: the war will not end, and Syrians will continue to be subject to some of the most horrific atrocities yet documented, as they have since 2011. The only moral justification for these strikes then is drawing lines and saying enough, whatever exactly that might mean.

According to this line of argument, state violence is almost a value in its own right. It expresses the indignation and dignity of the state that embarks on it, even if it serves no discernible practical purpose. This aestheticisation of state violence is deeply troubling, but it is also impossible to square with Slaughter’s assertion that we should not allow the illegality of the strikes to cloud our moral judgement. Which brings us to her most profoundly bizarre point:

Civil disobedience is illegal as well. And see the report of Independent International Commission on Kosovo, created by the Swedish government, https://t.co/ZJJoHKqjXn, concluding that the bombings were “illegal but legitimate.” There are no easy answers. https://t.co/laVsVPHJyy

Slaughter’s point at its strongest seems to be that some things that are defensible are against the law, so pointing to illegality is not conclusive of moral wrongness or ‘illegitimacy’. This prevents illegality from providing an ‘easy answer’. But of course, for the comparison to make any sense, it needs to convince us that there is something analogous between the moral arguments for civil disobedience against unjust legal systems, and the morality of uses of force by the mightiest military power in the world that are illegal under the system of international law, where the latter is, in some way, unjust.

Putting aside the fact that none of the powers involved has invoked anything resembling civil disobedience as a justification, or conceded they were illegal while insisting on their legitimacy, if we do think about the justification as a form of civil disobedience, just how does the analogy fit at all? Are the U.S., the UK and France—all three permanent Security Council members with veto powers—oppressed and hampered by the (legal) inability to use force? Is Russia’s veto-power now implicitly constrained by whatever the U.S., UK and France say is civil or acceptable or moral? Which laws, rules, legal structures or principles impugned are liable to be civilly disobeyed? Is the morally unjust legal order here the UN Charter system—and is it unjust as a whole, or just in this specific way and in these circumstances; unjust insofar as it does not stop injustice? And given the old problem of the lack adjudicating sovereign at the international level—that no state is in the position as judge of the rights of others, or the punisher of transgressions like using chemical weapons on civilians—then who exactly is being disobeyed? And who gets to be a dissentient, civil or otherwise: could the Syrian Army claim disobedience from the norms prohibiting the use of chemical weapons, or those that protect civilians, perhaps on a claim—not infrequently invoked by the U.S. military—that civilians, children with ‘potential hostile intent’, or ‘military-age males’ can all provide material support to the enemy, and can be legitimate targets? To sum up all of these points in a more polemical way: can we think of a Tomahawk missile like we think of Rosa Parks?

Needless to say, the legal and political label reserved for individuals who perform ‘civil disobedience’ by violent means is ‘terrorist’ with all the legal inconveniences this carries. Non-violence and a willingness to accept legal punishment are, after all, definitional of civil disobedience and inseparable from the moral appeal it has for many. Injustice and immorality is shown by the working of a legal system and the injustice of the punishments it inflicts on the disobedient; the rightness of civil disobedience lies in that demonstration, not in its illegality. Most importantly, killing is not and can never be read as a refusal to obey unjust laws. It may find its justifications—in revolution, in resistance, in self-defence—but it is rightly not seen as a form of disobedience.

Despite Slaughter’s intentions, and to return to our point about the aesthetic value of state violence, it is precisely the civil disobedience analogy that points to the range of non-violent means of responding to atrocity that could have been ‘civil’- in the sense of being non-military. As Frederic Megret has argued, international law does or could offer a range of options to ‘help victims help themselves’ that both go beyond the use of imperial violence, but also to confront these victims as active authors of their own history, and not as passive subjects of other people’s actions. It is a bitter irony that the strikes were conducted by an administration openly hostile to Syrian, as well as to other, refugees and migrants and particularly those from Muslim-majority countries. Nonetheless, Slaughter’s proposed imaginary is firmly one of ‘muscular humanitarianism’, albeit one that will not even assume responsibility for its own desires in inviting us to identify with the USA both as a powerful, potent actor and also as an oppressed individual or group battling an unjust legal system against all odds.

Any and all of Slaughter’s comments could plausibly be dismissed as disingenuous. We would not blame anyone who chose to do so, even though we are convinced that when the powerful talk, their words should be taken seriously, though perhaps not always literally. Nonetheless, we suspect that there is a deeper malaise that rendered such an absurd analogy both thinkable and persuasive to one of the most prominent liberal international lawyers of the post-Cold War world. It is precisely in the imaginaries proposed by Slaughter, these suggestions or demands about how we are supposed to situate ourselves within the world and its tragedies that we can find some (stretched) logic that is immanent in hegemonic understandings of international law. This sort of thinking isn’t possible without the heavy anthropomorphisation of the state.

Anthropomorphisation has been prevalent in the discipline at least since the 19th century. It relies on what is commonly described as the ‘domestic analogy’: the idea that there is some fundamental homology between the position of individuals in domestic legal systems and that of states vis-a-vis international law.[1] This intellectual manoeuvre performs a number of important ideological functions. It legitimises the international legal order by rendering it commensurable and familiar to domestic political and legal authority. It reinforces the liberal, contractual perception of (domestic) politics by pointing at an order where the ‘state of nature’—with its barbarians, lawlessness and dispositions towards wars of all against all—purportedly still exists and needs to be confronted with on a daily basis. It insists that state choices are just like individual moral decisions, or decisions of domestic policy.

Much mainstream discussion of international law issues often boils quickly down to the kind of language Slaughter uses, especially in regards to humanitarian intervention. Questions of imperialism, past and present, are waved away, and so are analyses of the structural roots of conflict and atrocity. All that is left from this act of abstraction is the (intervening) state as a conflicted—yet potent—individual actor who struggles to put an end to the moral tragedy that is unfolding before his eyes. In this context, as Susan Marks has argued, only arguments against intervention are cast as state-centric, while pro-interventionists fashion themselves as representatives of progressive values and humanity.[2] In fact, what pro-interventionists argue for is the right of one sovereign state to use its organised military force in the territory of another provided that it can assert humanitarian motives. Therefore, what is in reality an argument about ‘which sovereignty to prefer’ appears as a battle between morality and sovereign authority. In other words, something not too far from civil disobedience.

To make matters even worse, this conflation between the individual and the state goes both ways. Not only are states cast as moral individuals, but individuals — lawyers or not — are invited by the very structure of international law and of ‘muscular humanitarianism’ to think, see and react as a state. This mindset is an indispensable part of one’s training as an international lawyer. Since the traditional doctrine of sources in international law inexorably bounds legality to the nation-state, the young international lawyer has to familiarise herself with the ways states act and ‘think’ about legality. She must immerse herself in the niches of administrative practice and, importantly, treat them as manifestations of something called ‘opinio juris’. In order to promote whatever she thinks is good and just, the international lawyer learns that she has to anchor these values or interests to the acts, evaluations and vocabulary of the nation-state: promote an international treaty, trace the existence of custom, even assert the existence of general principles of law common to civilised states. Unsurprisingly, militaristic humanitarianism does not offer any alternatives to this profound identification with the state. After all, the ‘what would you do’ question often addressed to war-sceptics demands that we answer as if we are the ones in control of the USA’s imperial machine. This might have been partly true for Slaughter at some point, but the rest of us would be wise to resist such interpellations.

As part of that resistance, we might want to ask the burning question Slaughter raises, albeit only inadvertently. What would a real civil disobedience—through, in and of—international law, actually look like? We have no easy answers to this question, but there are some directions worth exploring. A first is to recognise and resist the anthropomorphisation of the state, and to insist on talking about the structures—international and domestic, historical and contemporary—that we might try to resist, dismantle, and disobey. A second is resignations and refusals, official or not: to recover a tradition of office holding where fidelity to justice means a refusal to take part in things that debase it, of refusing power without responsibility, as advisors, academics or public commentators.

Martin Clark is a PhD candidate at the Department of Law, London School of Economics and Political Science

[1] For a classic example of this approach see: Hersch Lauterpacht, Private Law Sources and Analogies of International Law: With Special Reference to International Arbitration (Longmans, Green and Co. Ltd.,1927).