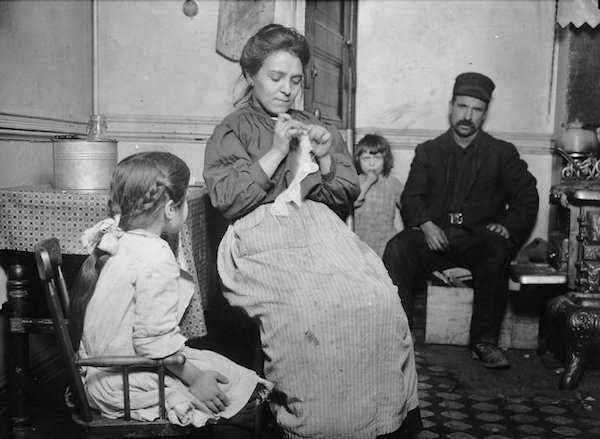 The following chapters are, in a certain sense, the execution of a bequest (1).

That is how Engels begins his book The Origin of the Family, Private Property and the State, published in 1884. After Marx’s death the previous year, Engels had taken up the task of developing and organizing part of Marx’s unfinished and unpublished work–much of which had been written in collaboration with Engels.

His book is based on Lewis Morgan’s anthropological study, Ancient Society, which Engels saw as an application of Marx’s historical materialist method (despite important criticisms of the text). Engels thought his book could, “only provide a slight substitute for what my departed friend no longer had the time to do”. Marx’s influence is evident in the text, however, as Engels relied on annotations that Marx left on Morgan’s book.

In exploring ancient and modern societies in order to understand the relationship between forms of production and family organization, Engels analyzes the oppression of women from a materialist point of view. The Origin of the Family, Private Property and the State is a seminal text in discussions of women’s oppression from Marxist as well as non-Marxist feminist perspectives, although there are also valid critiques to be made.

A Century and a Half of Relevance

In order to make certain of the wife’s fidelity and therefore the paternity of the children, she is delivered over unconditionally into the power of the husband; if he kills her, he is only exercising his rights. (132)

Engels wrote those words in 1884. Over half a century later, the relevance of Engels’ denunciations of women’s oppression is exemplified by violence against women highlighted by the massive mobilizations against femicide—Ni Una Menos as well as by the #MeToo campaign in the U.S.

In Engels’ view, the creation of the monogamous family unit was “the world historical defeat of the female sex”:

…the woman was degraded and reduced to servitude, she became the slave of his lust and a mere instrument for the production of children. This degraded position of the woman, especially conspicuous among the Greeks of the heroic and still more of the classical age, has gradually been palliated and glazed over, and sometimes clothed in a milder form; in no sense has it been abolished (132).

This is not the only text in which Marx and Engels take a strong stance against women’s subordination in class-based societies. In The Communist Manifesto, they also denounce the double standards of 19th century capitalist society that began to integrate women into the workforce as an army of ultra-exploited and underpaid workers. They argue that women are conveniently represented as either asexual mothers or whores whose sexuality is on the market. In this text, they respond to the defenders of bourgeois values, ​​who argued that communists wanted to “collectivize” women:

Engels and Marx were not the only socialists of their time who wrote about women’s oppression; The Origin of the Family, Private Property and the State was a response to the work of other socialist leaders. August Bebel, in the 1883 Women and Socialism, and Karl Kautsky, in newspaper articles published in 1882-1883, had both argued that women have been oppressed since the first forms of human social organization.(3) Engels countered this idea, basing his work on Morgan and other anthropologists of the time. Instead, he argued, women’s subordination has specific historical origin in the emergence of private property as a social institution. Before private property, not only were societies not based on the oppression of women, but some had been egalitarian and even matrilineal. Engels writes about a “maternal right”, citing the Swiss anthropologist Bachofen, though he critiques this notion by pointing out that there was no state in these societies to enforce that right (125).

Towards the end of the book, we also see the influence of the utopian socialist Charles Fourier, who had described monogamy and property as characteristics of a “civilization” that represented a war of the rich against the poor (184).Engels proposes the following historical analysis:

His analysis was later criticized by many as “economistic” – more out of prejudice towards Marxism than in a way that explained how an economistic perspective would limit the analysis. Yet, this is precisely what is novel about Engels’ approach: he situates the problem of women’s oppression on the theoretical plane of social production, thereby identifying it as a concern for Marxism.

For Engels, women’s oppression arises out of the same process that establishes private property and class division as the heart of social organization. It is a process that creates concomitant forms of family, which ensures the inheritance of accumulated wealth. It also created a State, which perpetuates the class division and the right of the propertied class to exploit the non-propertied. That is to say, as with all human-generated social phenomena, there is nothing “natural” about the oppression of women.

Nevertheless, various authors who write from a socialist perspective have called for a critical reading of the book, either because subsequent anthropological studies brought evidence to bare on the topic, or because they argue the book simplifies or idealizes certain historical milestones, such as the unlikely existence of a so-called “primitive matriarchy”.

For example, Chris Harman, an English theorist and member of the Socialist Workers Party, has pointed out that Engels’ idea of ​​sexuality and the organization of lineages in early agricultural societies were much more complex than Engels granted. According to Harman, Engels’ analysis also fails to explain why, when society began to divide into classes, it was men who managed to control property rights for their own benefit and why they would need to secure their inheritance after centuries of not doing so (4).

Celia Amorós, the Spanish feminist, puts forward this same criticism, arguing that this gap entails the danger of a “certain naturalism” on the part of Engels, who supposes a social disdain for tasks attributed to women, analogous to the forms of domestic work “privatized” in capitalism (5).

Mandel, on the other hand, argues that the division of labor, prior to the development of class, initially emerged out of the need to confine women to certain social roles to maintain society’s reproductive capacities. Thus, women were confined to certain social practices and made into an object of economic greed (6).

This, along with other descriptions that Engels makes of ancient societies, remains an ongoing debate, awaiting the input of new anthropological discoveries. However, as Amorós recognizes, the subordination of women is greater in societies characterized by private property. Establishing this connection is one of Engels’ key contributions. Another is the parallel between the labor contract and the marriage contract; both presuppose equality between those entering into the contract, although this is far from the reality of boss/worker and male/female relationships.

Another critique involves the connection Engels establishes between patriarchy and capitalism, which reflects the relationship between his text and Marx’s Capital. Amorós commends Engels’ understanding of working woman’s double shift (at home and in the workplace) – though she thinks he is naïvely optimistic about the possibilities of resolving this burden. She argues that capitalism does not seem to have automatic preferences for which subject to exploit, and has incorporated women and children into the labor force whenever necessary. Does that mean that a gendered division of labor will no longer be functional to the accumulation of profit? Does the permanence of a gendered division of labor and a “double shift” demonstrate that male workers collaborate with the exploiting class by lowering the cost of labor through the oppression of their wives and daughters?

Here we can add the discussion of “social reproduction.” Engels’ definition that distinguishes between production and reproduction opens the door to a dualistic view of “the mother” and “the worker”—roles that cannot be separated in real life (7). On the other hand, some Marxists have questioned Engels’ prediction that socialism, by dissolving class, will bring an end to gender oppression. Some readings of Marx have obscured the particularities of gender oppression by subordinating it to class (8).

Beyond all these debates, the value of Engels’ work is that it outlines the terms with which to explore the concrete relationship between patriarchy and capitalism, insofar as he recognizes a history of gender oppression that predates capitalism. At the same time, as Engels frames women’s oppression as a form of appropriation of social wealth, which allows us to understand why capitalism, despite melting various institutions into thin air, takes advantage of ancestral patriarchal prejudices on which the reproduction/production dichotomy was built. Marx echoes his analysis:

Man’s innate casuistry! To change things by changing their names! And to find loopholes for violating tradition while maintaining tradition, when direct interest supplied sufficient impulse. (132)

The Origin of the Family, Private Property and the State generates enormous theoretical material and much as not yet been developed or debated. Engels’ book must undoubtedly be read critically – not only because of what it may have left out, but because many different, sometimes opposing, interpretations have been made of it. Nevertheless, Engels’ rejection of an essentialist understanding of the feminine and masculine has a political implication: as with all social processes that have emerged throughout history, patriarchy can be abolished too.