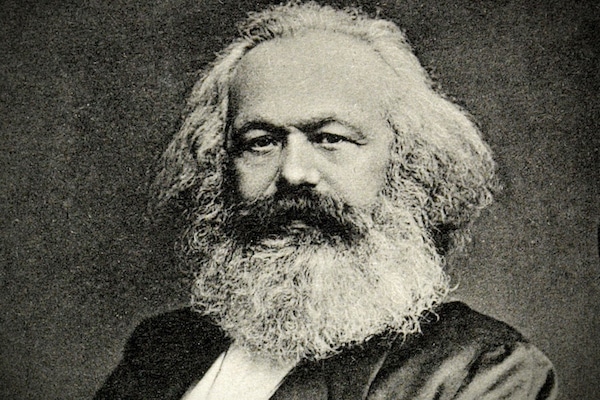 Thinking of the relevance of Karl Marx on the 200th anniversary of his birth on 5 May 1818, takes me back to a wonderful picture of him in Algeria. It was taken in his final year in 1882. Underneath the full white beard is that familiar glint in his eye. He is up to something.

Though seriously ill he took an active interest in local life penning a long letter to his daughter Laura. He wrote appreciatively:

For the Muslims there is no such thing as subordination; they are neither ‘subjects’ nor ‘administrés’… something which Europeans have totally failed to understand. Nevertheless, they will go to rack and ruin without a revolutionary movement.

In his last years, after the Paris Commune of 1871 when working people rose up against the capitalist state, he became interested in alternative paths to socialism. In his Ethnological Notebooks compiled in 1881, he critically read ethnographers, praising the freedom that the Native American Iroquois women had compared to women in “civilized” societies.

It was live human beings and their reason that remained essential – not the mechanical materialism that Marxism is often reduced to. Marx was a revolutionary humanist, open to – and inspired by – the new passions and forces that spring up and open new avenues to a truly human society.

Marx spent most of his life analysing capitalism. No one would deny that today it is well-nigh impossible to escape capitalism as it rushes faster and faster down the path of what he called the general law of capitalist accumulation.

The accumulation of wealth on one side and the accumulation of misery on the other is reflected, for example, in the recent Oxfam report that eight men own the same wealth as the 3.6 billion people who make up the poorest half of humanity.

At the same time, what Marx called the increasing “absolute mass of the proletariat and the productiveness of its labour” and the absolute mass of the “surplus population”, is reflected in the size of the global workforce estimated at about 3.5 billion. The majority of them, of course, live in the global South.

Global wealth and global inequality are massive, and the pauperisation and precariousness of human existence is terribly real.

Marx’s critique of capital is based on a philosophic perspective that could be considered radically humanist. It’s not simply a critique of alienation but a critique based on the reality of human life eaten up by the fetish of capital accumulation. Capitalism’s bloody and violent “rosy dawn”, what Marx called “primitive accumulation”, is a process to which contemporary capitalism continuously returns.

Workers are free to sell their labour for wages because they are violently alienated from other means of survival. Capitalism becomes naturalised and takes on a fetish character as the subject of life. Alienation becomes the coin of all social relations. The idea that people fetishise commodities, spending their waking and dreaming time thinking about them is caused by the simple inversion that gives commodities subjectivity and reduces human labourers to objects.

Marx warned that, although unveiling the secret of the fetish was crucial, that alone wouldn’t free us from its blinding power. Rather, it was only human beings in struggle who could vanquish the fetish, capitalism.

We revolt because we have to. Resistance to capital is inevitable and takes new and unexpected forms inside and outside of production.

Capitalism, however, marches on in its endless search for free labour and free goods, ruthlessly exploiting human beings, animals and the environment. But, Marx argued, it is also resistance and capitalist crisis that forces it to innovate and defy spatial and temporal restrictions.

Commodifying everything, its ideological prizefighters dress up expropriation as the freedom to exploit oneself in casual and precarious labour. The “app” economy – described as the “economic activity surrounding mobile applications” – is just the latest manifestation of Marx’s prescience.

The founder of the philosophy of Marxist Humanism, Raya Dunayevskaya described Marxism as a theory of liberation – or nothing. Marx was not a lonely intellectual sitting in the British Museum. He was a philosopher and activist constantly involved with revolutionary movements.

To say that Marx was a genius is to recognise that his ideas were intimately connected with – and elucidated by – the logic and history of ongoing struggles.

Marx viewed capitalism as a living hell that chewed up human life. It was the workers’ way of knowing, their self-organisation, that interested him as it spoke to the necessity of a dual movement: uprooting capitalism and developing a new society based on human needs. Thinking with Marx on his 200th birthday means recognising the importance of thought in this confrontation.