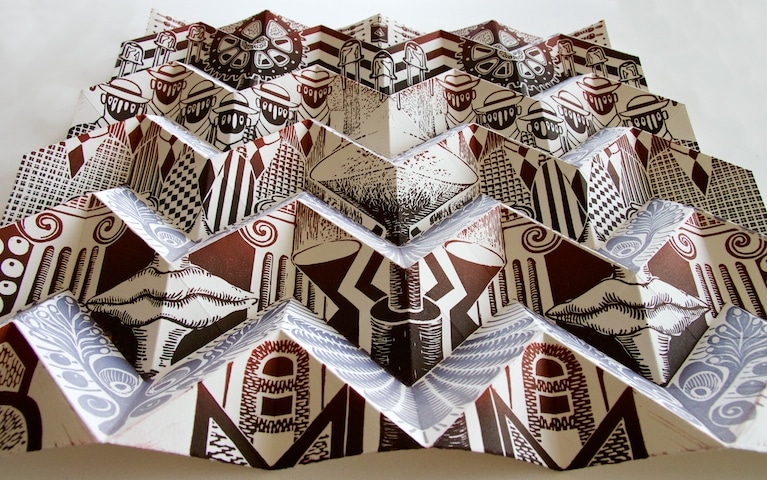 “Metabolic Rift” by Eveline Kolijn, Linocut on folded paper, 2016. The iconography in the print Metabolic Rift—the term used by Karl Marx to explain the crack or rift that capitalism has created between social and natural systems—is based on the contemporary art collection of the Vorres museum and classical ornaments found in the gardens of the museum grounds.

While mainstream ecological theory has been dismissive of Karl Marx, serious research in recent decades has recovered some of his very important insights on ecological issues. The pioneers have been James O’Connor and the journal Capitalism, Nature and Socialism—a tradition continued by Joel Kovel—but the most systematic and thorough investigations on Marx’s ecological views are those of John Bellamy Foster and his friends from Monthly Review.

Many ecologists accuse Marx of “productivism.” Is this accusation justified? No, insofar as nobody denounced as much as Marx the capitalist logic of production for production: the accumulation of capital, wealth and commodities as an aim in itself.

The fundamental idea of a socialist economy—contrary to its miserable bureaucratic caricatures—is one of producing use-values, goods which are necessary for the satisfaction of human needs. Moreover, the main importance of technical progress for Marx was not the infinite growth of goods (“having”) but the reduction of the labour journey and the increase of free time (“being”).

The opposition between “having” and “being” is often discussed in the Manuscripts of 1844. In Capital, vol. 3, Marx emphasizes free time as the foundation of the socialist “Kingdom of Freedom” (Marx 1968, III, 828)

However, it is true that one can find in Marx—and even more in the dominant Marxist currents that followed—a rather uncritical stance toward the productive forces created by capital, and a tendency to see in the “development of productive forces” the main factor of human progress.

The supposedly canonical text in this respect is the famous Preface to the Contribution to the Critique of Political Economy (1859), one of Marx’s writings most loaded with a certain evolutionism, a belief in inevitable historical progress, and an unproblematic view of the existing productive forces:

In this well-known passage, productive forces created by capital appear as if neutral, and revolution has only the task of suppressing the relations of production which have become “fetters,” “shackles,” for a larger (unlimited?) development of the productive forces. 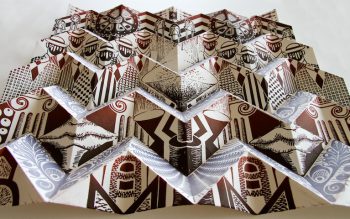 “Metabolic Rift” by Eveline Kolijn, Linocut on folded paper, 2016. The iconography in the print Metabolic Rift—the term used by Karl Marx to explain the crack or rift that capitalism has created between social and natural systems—is based on the contemporary art collection of the Vorres museum and classical ornaments found in the gardens of the museum grounds.

In several other writings, however, and in particular those concerning agriculture in the three volumes of Capital, one can perceive key elements for a truly ecological approach, through a radical criticism of the disastrous results of capitalist productivism.

As John Bellamy Foster has show with great acumen, we can find in Marx’s writings a theory of the metabolic rift between human societies and nature, as a consequence of the destructive logic of capital (Foster 2001, 155-167). The expression Riss des Stoffwechsels, metabolic rift—a break in the material exchanges between humanity and the environment—appears for instance in chapter 47, “Genesis of the Capitalist Ground Rent” in Capital, vol. 3:

Large landed property reduces the agricultural population to an ever increasing minimum and confronts it with an ever growing industrial population crammed together in large towns; in this way it produces conditions that provçke an irreparable rift in the interdependent process of social metabolism, a metabolism prescribed by the natural laws of life itself. (Marx 1981, 949)

The issue of the metabolic rift can be found also in another well-known passage of Capital, vol. 1, the conclusion of the chapter on great industry and agriculture. This is one of the most important writings of Marx, because it has a dialectical vision of the contradictions of “progress,” and of its destructive consequences, under capitalist rule, for the natural environment:

Capitalist production (…) disturbs the metabolic interaction (Stoffwechsel) between man and the earth, i.e. prevents the return to the soil of its constituent elements consumed by man in the form of food and clothing; hence it hinders the operation of the eternal natural conditions for the lasting fertility of the soil. (…) All progress in capitalist agriculture is a progress in the art, not only of robbing the worker, but of robbing the soil; all progress in increasing fertility of the soil for a given time is a progress toward ruining the more long-lasting sources of fertility. The more a country, the United States of North America, for instance, develops itself on the basis of great industry, the more this process of destruction takes place quickly. Capitalist production, therefore, only develops the technique and the degree of combination of the social process of production by simultaneously undermining the original sources of all wealth—the soil and the worker. (Marx 1970, 637-638)

Several elements are significant in this important passage. First of all is the idea that progress can be destructive, a “progress” in the degradation and deterioration of the natural environment. The example chosen by Marx is limited—the loss of fertility by the soil—but leads him to raise the larger issue of the attacks on nature, on the “eternal natural conditions,” by capitalist production.

Secondly, the exploitation and debasement of the workers and of nature are presented from a similar viewpoint, as results of the same predatory logic, the logic of capitalist great industry and industrial agriculture. This topic often appears in Capital, for instance, in some sections of the chapter on the labor journey:

The limitation of industrial labour was dictated by the same necessity which led to the spreading of guano* over England’s fields. The same predatory greed (Raubgier) which on one side exhausts the soil, on the other attacks the roots of the nation’s vital force (…) In its blind and boundless avidity, in its werewolf hunger (Werwolfs-Heisshunger) for surplus labour, capital overrides not only the moral but also the physiological limits of the labour journey .(…) It achieves its aim by reducing the life of the labourer, as a greedy landowner obtains greater rentability by exhausting the fertility of the soil. (Marx 1968, I, 280-281)

This direct association between the brutal capitalist exploitation of the proletariat, and of the earth, lays the theoretical ground for a strategy articulating class struggle and ecological struggle, in a common fight against the domination of capital.

Marx considered the preservation of natural conditions as an essential task of socialism. In volume 3 of Capital, he opposes to the capitalist logic in agriculture, based on brutal exploitation and exhaustion of the soil, a different logic, a socialist one grounded on “the conscious and rational treatment of the land as permanent communal property”—a treatment that considers the soil not as the source for short-sighted profit, but as “the inalienable condition for the existence and reproduction of the chain of human generations.”

A few pages above, we find a very significant statement, which again directly associates the overcoming of private property with the preservation of nature:

From the standpoint of a higher socio-economic formation, the private property of particular individuals in the earth appears just as absurd as the private property of one man in other men. Even an entire society, a nation, or all simultaneously existing societies taken together, are not owners of the earth. They are simply its posessors, its beneficiaries, and have to bequeath it in an improved state to succeding generations as boni patres familias (good heads of the household). (Marx 1970, 3, 911, 948-49).

In conclusion: 21st-century ecosocialists cannot satisfy themselves only with the 19th century Marxian ecological heritage, and need a critical distance towards some of its limitations. Yet on the other side an ecology able to confront the contemporary challenges cannot exist without the Marxist critique of political economy, and its remarkable analysis of the destructive logic inherent in the unlimited accumulation of capital.

An ecology that ignores or despises Marx, his theory of value or his critique of commodity fetishism and reification, is doomed to become merely a “correction” of the “excesses” of capitalist productivism. Today’s ecosocialists can build on the more advanced and coherent arguments of Marx and Engels, in order to (i) achieve a real materialist understanding of the perverse dynamics of the system; (ii) develop a radical critique of the capitalist destruction of the environment; and (iii) project the perspective of a socialist society respecting the “inalienable conditions” of life on Earth.