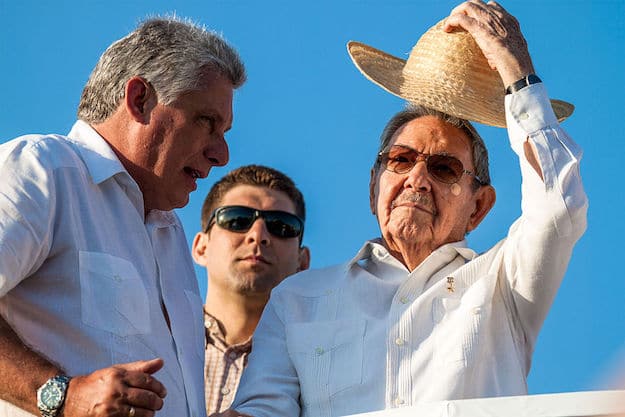 1. Who is the new Cuban President and how was he elected?

The new Cuban President is 58 year-old Miguel Díaz-Canel. He was born on April 20th, 1960, one year after the advent of the Cuban Revolution. After graduating as an engineer in 1985, he began teaching at the Central University of Las Villas. In 1994, he was elected First Secretary of the Provincial Committee of the Communist Party of Villa Clara Province. He quickly acquired a reputation for being modest, hardworking and honest. Ten years later, in 2003, he came to hold the same position in Holguín province. In 2003, his exceptional record, as well as the recognition of the inhabitants of the region, allowed him to accede to the Political Bureau of the Cuban Communist Party. From 2009 to 2012, he held the position of Minister of Higher Education. In 2012, he made his entry into the Council of Ministers as Vice-President in charge of Education, Science, Sport and Culture. In 2013, he was elected by the Cuban Parliament as First Vice-President of the Councils of State and Ministers, which is Cuba’s highest office after the Presidency of the Republic itself.

2. Why are Cuban presidential elections indirect?

In order to come to power, Miguel Díaz Canel was first elected as a member of the Cuban Parliament by direct, universal and secret ballot. He was then elected by the Parliament as head of the Council of State and the Council of Ministers, in other words, the Presidency of the Republic.

Cubans are convinced that, in terms of presidential elections, indirect suffrage is the most democratic means. Indeed, other than symbolically, it is materially impossible for a directly elected President of the Republic to be held accountable to voters. On the other hand, if the President is elected by Parliament, as is the case in a number of Western countries, Spain or the United Kingdom for example, Parliament is in a position to exercise control over the executive. Thus, it is much easier to hold accountable the Head of State who must come before Parliament to defend his or her actions and answer the questions posed by those who directly represent the nation. Furthermore, an indirectly elected President will be less likely to feel omnipotent, a characteristic that sometimes defines those who claim the direct legitimacy of all the people. In other words, a President elected by a Parliament has less power than a President directly elected by the people.

3. Have Fidel Castro and Raúl Castro led the country since 1959?

Contrary to popular belief, revolutionary Cuba, that is to say post-1959 Cuba, has had no less than five Presidents of the Republic. Manuel Urrutia was the first to occupy this position, a post that he held from January to July 1959. Osvaldo Dorticós assumed  the position from July 1959 to December 1976. Then, after the adoption of the new Constitution of 1976, Fidel Castro held the post of President of the Republic from 1976 to 2006, having been duly voted into office every five years. Following his retirement from politics in 2006 for reasons of health, two years before the end of his mandate, Raúl Castro, then Vice-President of the Council of State and the Council of Ministers, took over until 2008, as provided for in the Constitution. From 2008 to 2018, Raúl Castro was elected President of the Republic and served two successive terms. During his second term, wishing to limit the duration of executive mandates to a maximum of ten years, he expressed his desire not to run again for office. The executive mandate measure should be integrated into the next constitutional reform. Thus, Miguel Díaz-Canel was elected President of the Republic until 2023, with the possibility of carrying out a second mandate until 2028.

If the importance of Fidel Castro in the history of Cuba is undeniable, talk about a Castro brothers’ Cuba is inaccurate on the political level. After 17 years as Prime Minister, Fidel Castro served as President of the Republic for 30 years. For his part, Raúl Castro was President of the Republic for 12 years. No other Castro siblings have held executive positions in Cuba. Fidel Castro has seven children and Raúl Castro, four. None of them has ever held any position in the government.

In terms of longevity in power, for comparison, François Mitterrand was President of the French Republic for 14 years. Felipe González was head of the Spanish government for 14 years. Angela Merkel, the German Chancellor, once her fourth term ends in 2021, will have spent 17 years as the head of Germany.

4. Can one speak of democratic elections when there is but a single party?

In Cuba, unlike other countries in the world, the Communist Party is not an electoral party. It does not propose electoral candidates. Cuban legislation is formal in this regard. Only electors can nominate candidates at the municipal, provincial and legislative levels. It is therefore strictly forbidden for the CCP to present any candidate for election.

This is the procedure: before the elections, citizens gather at public meetings in their constituencies to nominate candidates. For each election, a minimum of two and a maximum of eight candidates are required. Once chosen by the base, the candidates’ résumés are posted within their constituencies. Election campaigns are strictly prohibited. For municipal, provincial and legislative elections, suffrage is universal and secret.

Cubans are convinced that their system is more democratic than those of many Western countries. Their point of view is the following: France has a multi-party system. In the vast majority of cases, whatever the election, it is the political parties that designate the candidates. Thus, French citizens choose between the various candidates designated by the various political currents. In France, however, less than 5% of the citizens are members of a political party, the only affiliation that gives them the opportunity to participate in the nomination of candidates. Thus, 95% of all voters have no opportunity to participate in the nomination of candidates for various elections, their choice being limited to opting for such and such a candidate designated by a particular political party.

5. What is the composition of the new Cuban Parliament?

The composition of the new Cuban Parliament is broadly representative of Cuban society and its ethnic and social diversity. First of all, voter turnout was 85%. Therefore, nearly 50% of the deputies (293) are neither members of the Communist Party nor of the Communist Youth Union. Contrary to popular belief, one does not become a member of the CCP by simply applying. Quite to the contrary. To join the CCP, you must be proposed by a member and go through a protracted selection process. The idea that all Cubans are required to be members of the CCP is pure fantasy. Of the more than 8 million voters in Cuba (out of a total population of 11.2 million), only 800,000 are CCP members, barely 10% of the electorate. If we add the 400,000 members of the Communist Youth Union, that makes a total of 1.2 million people, or 15% of the voters. Thus, 85% of the electors are not members of the CCP or the UJC.

More than 53% (322) of the deputies are women. More than 56% (338) have been elected to the Parliament for the first time. The average age of the Parliamentarians is 49 and 13% of the elected representatives (80 members) are between 18 and 35 years old. Nearly 90% of MPs were born after 1959. More than 40% are black or of mixed heritage. The Speaker of the Cuban Parliament, Esteban Lazo, is black. Ana Maria Mari Machado, a woman, is Vice-President. The Parliament’s secretariat is also headed by a woman, Miriam Brito.

A Doctor of Iberian and Latin American Studies at the University of Paris IV-Sorbonne, Salim Lamrani is a lecturer at the University of La Réunion, and a journalist specializing in relations between Cuba and the United States. His new book is titled Fidel Castro, héros des déshérités (Paris: Editions Estrella, 2016). Preface by Ignacio Ramonet. He can be contacted at lamranisalim [at] yahoo.fr, Salim.Lamrani [at] univ-reunion.fr or via facebook.