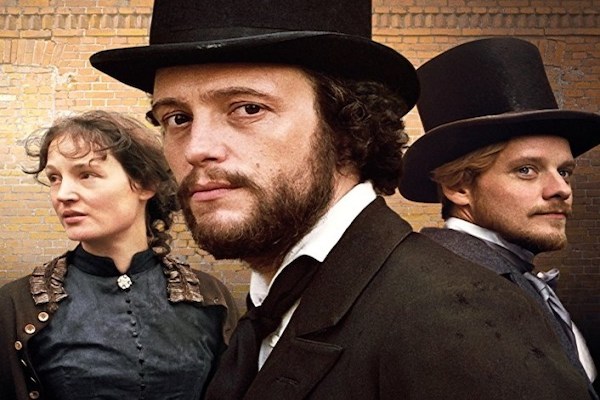 Written in English by Michael Heinrich; edited by Alex Locascio.

This a very professional movie made by a leftist director (Raul Peck), starring a number of rather good actors. It covers the time between 1842, when Marx was the chief editor of the Rheinische Zeitung, and early 1848, when the “Communist Manifesto” was finished. The movie focuses not only on the friendship between two young men whose theories became later enormously influential, Karl Marx and Frederick Engels; it also considers the relationships of these two men with their female partners, Jenny von Westphalen and Mary Burns, and the important role these women played. Compared with some older productions from Soviet Union and East Germany, this movie is much better in all respects.

However, “The young Karl Marx” is not a documentary. The rough facts are correct: that Marx edited a newspaper in Cologne; that he went to Paris, where he met Proudhon and where his friendship with Engels started; and that Marx and Engels became influential in the “Communist League”. Nevertheless, almost all of the details are purely fictional. We do not know when, where and how Engels met Mary Burns. Not even a single photo of Mary is available to us. The story told by the movie – that Mary worked in the factory partly owned by Engels’ father (by the way: the father never was a director of the factory in England, he always lived in Germany) – is just a nice fairy tale. If one wishes to produce a thrilling movie, such fairy tales have to be used, and purely fictional dialogues inserted in order to make things more intense. I am not criticizing this method as such. However, the manner in which things were intensified was frankly rather questionable in many respects. When Marx appears for the first time in the movie, discussing with the editorial board of the Rheinische Zeitung and demanding a more radical line against the Prussian government, the police are already waiting outside, knocking at the door before finally arresting the entire editorial board. The problem is not that this never happened; the newspaper was censored and finally closed down by the government, but nobody was arrested. The problem is that this early scene already presents the very young Marx as a radical fighter against the Prussian authorities, who strike back without mercy. The true story is not so simple, but much more interesting. The Rheinische Zeitung was founded and financed by the liberal bourgeoisie of the Rhineland, and because it was not a Catholic paper the (Protestant) Prussian state had some sympathies for it. In 1842/43 Marx was a liberal,not a communist. At this time he was not a fundamental opponent of the Prussian state; in his articles he tried to suggest how the Prussian state – as a modern, enlightened state – should act. Only after the Rheinische Zeitung was closed down by the authorities did Marx start to question his former position. Also, the Prussian Authorities at this time were not as hostile to Marx as the movie insinuates: After closing the Rheinische Zeitung, they contacted Marx and offered him a job, an offer which Marx rejected. To me, one of the most fascinating aspects of Marx’s personality is this radical willingness to learn and to change former concepts in the light of new insights. In the movie this aspect is reduced to a very simplified view: the genius Marx, who was always on the same correct path, who never had to overcome some questionable early ideas. When in the movie Marx meets Proudhon for the first time in 1844, he already criticizes him with arguments first used only 1847 in the “Poverty of Philosophy”. The movie presents Marx as superior to Proudhon in theory from their very first encounter. However, in early 1844, Marx admired Proudhon, because at this time Proudhon was superior to Marx in his knowledge of economic theory. Before Marx was able to criticize Proudhon, he had to learn a lot from him. The movie’s ignorance of Marx’s real development becomes very clear in the scene where Marx and Engels meet in Paris in the house of Arnold Ruge. Marx dislikes Engels and he tells him why: because when they met in Berlin in the salon of Bettina von Arnim, Engels spoke about communism as if he had invented it. Let us forget for a moment that Marx left Berlin in April 1841 and Engels arrived in Berlin only in September 1841, so that they never had the opportunity to meet in Berlin. The important point is that in 1841, communism was not an issue for either Engels or Marx. Not only were they not communists at the time; they did not even discuss communist theories.

Nevertheless, it is a nice movie, and as I learned from several discussions, it can inspire people to learn more about the lives and works of Marx and Engels. This is already a virtue, which we should appreciate. Enjoy the movie, but don’t forget that it’s not a documentary.

Michael Heinrich teaches economics in Berlin and is the author of An Introduction to the Three Volumes of Karl Marx’s Capital (Monthly Review Press, 2012) and The Science of Value: Marx’s Critique of Political Economy Between Scientific Revolution and Classical Tradition (Brill, translation forthcoming).