The United States’ National Endowment for Democracy distributed some 4.2 million dollars in Nicaragua, between 2014 and 2017, to train “new leaders” to overthrow the Sandinista government | Francisco Arias Fernández*

AS early as 2016, talk of war against Nicaragua could again be heard in Miami, at a time when the streets of this nation were a regional example of security, peace, and prosperity, where a hardworking, tranquil people proudly enjoyed the social and economic advances achieved by the Sandinista government, that had established a national consensus, in the wake of one of the worst interventions carried out by the United States in Central America.

With no justification whatsoever–when the news from Nicaragua around the world was about a proposed inter-oceanic canal that would boost the economy and impact global navigation–Congress members who make a living off the U.S. war against Cuba and Venezuela were mounting efforts to reverse the prosperity and calm that reigned in the land of Augusto César Sandino.

Congress members, first in the House of Representatives and later the Senate, introduced a bill to create obstacles to the awarding of international loans to Nicaragua, hamper foreign investment, and put a brake on socio-economic development in the country. This imperialist punishment, cooked up by the worst of the anti-Cuban mafia in 2015, set in motion the fabrication of a pretext regarding the alleged lack of democracy, justified as a way to “guarantee electoral transparency and fight corruption.” The result of this initial maneuver was the Nicaraguan Investment Conditionality Act of 2017 (NICA Act).

Ileana Ros, Albio Sires, Marco Rubio, and Ted Cruz, and others, among the most reactionary legislators in Congress from South Florida, Texas, and New Jersey, are again attempting to reinvent the Contras and get rid of the Sandinista government, which has repeatedly shown at the polls that it enjoys the people’s majority support.

The tentacles of this subversive plot go beyond the capital, since these forces are well connected to the United States’ coup-manufacturing machinery, and laid the foundation for a media campaign in coordination with agencies specialized in carrying out dirty wars and soft coups, working with U.S. intelligence and the CIA, in particular.

In this specific case, international press media have documented the participation of the U.S. Agency for International Development (USAID); the National Endowment for Democracy (NED); and the National Democratic Institute (NDI), as well their sub-contractors, which have been working meticulously, since Daniel Ortega was first elected, to re-invent a “new leadership,” selectively infiltrating key sectors of the economy, targeting youth, students, medium and small businesspeople, environmental and feminist groups, among others, to undermine the foundation of support for the Sandinista government.

It is revealing that on April 16, this year, following the same line espoused by anti-Cuban Congress members, USAID Administrator Mark Green announced that the U.S. government would continue supporting the participation of a “free… genuine” civil society in Nicaragua, after stating that the United States is concerned about the closing of democratic spaces in Nicaragua, “systematic” violations of human rights, and government corruption.

In March, Representatives Ileana Ros-Lehtinen and Albio Sires sent a letter to Green, in which they call on the U.S. government to reverse its decision to provide “zero aid” to Nicaragua through USAID for the fiscal year 2018-2019, while at the same time calling on the agency to avoid supporting “members of the private sector linked to corruption, money laundering, or the Daniel Ortega regime.”

At the end of 2008, the media reported that USAID had provided at least a million dollars in Nicaragua that year to NGOs, radio broadcasters, and political groups like the Communications Research Center (CINCO), to intervene in municipal elections.

This financing, as was denounced at the time, contributed surreptitiously as “small donations,” that were not to exceed 25,000 dollars, was part of a large scale U.S. plan to overthrow the government of Daniel Ortega, carried out since then by internal agents from the Nicaraguan right.

The strategy mounted to discredit the Sandinista government in the media was conducted via two financing routes; one directed by USAID and the Casals & Associates firm, and another managed by the so-called Common Fund in Europe, which provided funds to organize campaigns and mobilizations to destabilize the government.

By 2008, media in Nicaragua had identified at least 14 subversive projects run by USAID across the country, under the cover of a wide range of titles and objectives, made possible by this funding.

Another key element of the U.S. machinery linked to the CIA is the National Democratic Institute, an instrument dedicated to promoting “change” that focuses on “empowering” so called “agents of change” in countries with governments not to Washington’s liking.

A Swedish journalist reported, this past June 4, that three students from Nicaragua were conducting a tour of Europe to raise support for a plot against the Sandinista government, stating that at least one of the youth represented an organization created and financed by the United States.

Jessica Cisneros, he reported, was active around the issue of the involvement and participation of youth in political processes, and was a member of the Movimiento Cívico de Juventudes (Civic Youth Movement).

Another of these “agents of change” promoting hate for the Sandinista government and support for a coup, was Yerling Aguilera, from the Polytechnic University in Managua (UPOLI) and specializing in research on revolution and the feminist movement, who, according to the reporter, has been an employee and consultant for the Institute of Strategic Studies and Public Policy (IEEPP) in Nicaragua, that works to “strengthen the abilities of political, state, and social actors for a better informed public via creative, innovative services,” which has received 224,162 dollars from the National Endowment for Democracy (NED) between 2014 and 2017.

The NED has distributed some 4.2 million dollars in Nicaragua, over this three-year period.

The USAID, NDI, and NED have been busy in the country, with thousands of activists trained to “change society.” Hundreds of NGOs, universities, and political parties have received funds and materials as part of the subversive plan that was not conceived to advance through traditional political organizations, but rather those invented to give the impression that they emerged “spontaneously” from dissatisfaction, hiding the true interest of the North at work.

Although efforts were intensified after Ortega’s 2006 electoral victory, since 2015, with the approval of the NICA Act, U.S. agencies increased and broadened financial support and resources for their “agents of change” in Nicaragua, above all through leadership courses and money for young people in universities, NGOs, and political parties.

In their political, diplomatic, and media advice to the coup-plotters, Washington has insisted on demonizing Daniel Ortega and his government, an effort carried out not only by the White House, and its agencies, allies, satellites, and mercenaries, but also the corporate media monopolies and fabricators of lies, which magnify internal problems and accuse authorities for all types of human rights violations, totally omitting the crimes and destruction committed by individuals who have been “empowered” by the USAID, NDI, NED, and CIA, who have caused the failure of talks and calls for peace. As is the case in Venezuela, Donald Trump and his advisors, architects of a thousand invasions, do not believe in dialogue or pacts, opting for war on all fronts.

Nicaragua has become the epicentre of U.S. warmongering efforts, hand in hand with Anti-Cuban legislators and profiteers, and other veteran hawks. Washington is attempting to re-invent its strategy at the cost of human lives and destruction in the streets of Nicaragua. 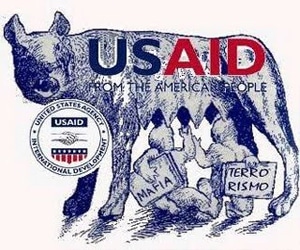