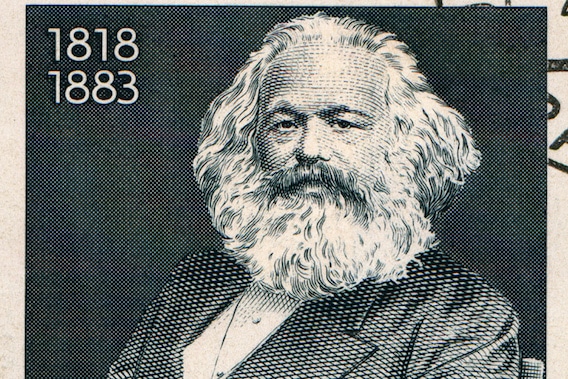 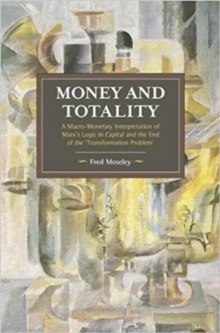 Money and Totality: A Macro-Monetary Interpretation of Marx’s Logic in Capital and the End of the ‘Transformation Problem’
By Fred Moseley
Historical Materialism book series; Chicago: Haymarket Books, 2016, $28 paperback.

anyone familiar with the literature on Marx’s Capital knows about the “transformation problem.” The “problem” here is Marx’s purported failure to develop a consistent theory of long-run equilibrium prices on the basis of his labor theory of value. The standard interpretation, dating from the work of Ladislaus von Bortkiewicz in 1906-7, says that in deriving “prices of production” that equalize profit rates across industries, Marx forgot to transform input values into prices of production.

Once Marx’s derivation is corrected by simultaneous pricing of the inputs, so the story goes, it is no longer true that the sum of prices = the sum of values and that total profit = total surplus value; only one of these two equalities can hold, but not both. Moreover, under the corrected transformation the aggregate or average rate of profit in price terms is not regulated by the value rate of profit, and the latter becomes redundant.

Marxist economists have responded to this transformation problem in three ways, which at times have been combined in complex and even contradictory fashion.

One approach is to discount the importance of the problem of market price determination relative to the qualitative insights and explanatory power still obtainable from Capital’s other analyses. In this view, Marx’s treatments of such important phenomena as industrial development, exploitation, inequality, unemployment and economic crises are not irreparably damaged by his failure to properly complete the value-price transformation.

A second response is to revise Marxist economics by jettisoning the labor theory of value, using the methods of neoclassical or Sraffian modeling. In this way, it is hoped that the strengths of Marx’s class-based and dialectical analysis can be maintained and further developed without the embarrassing analytical inconsistency revealed by the transformation problem.

A third response has been to try salvaging the consistency of the labor theory of value as a framework for long-run equilibrium price determination through various new revisions of Marx’s transformation procedure.

In this context Fred Moseley’s book, the culmination of his research over two decades, is a radical departure and a real breakthrough. Moseley finds both the standard interpretation of the transformation problem and the usual Marxist responses, especially the second and third ones, to be fundamentally defective in four basic, interrelated respects, involving: (1) the primary purpose of Marx’s analysis; (2) the method Marx employs in Capital; (3) the fundamental importance of money in Marx’s analysis; (4) the proper criteria for evaluating alternative interpretations of Marx’s theory, including his theory of prices of production.

Moseley’s synthetic, logical and textually-based consideration of these four issues leads inexorably to the conclusion that the transformation problem is actually a non-problem. Marx did not “neglect” to transform the inputs from values into prices of production; in reality such a transformation of input costs is not necessary or appropriate given Marx’s method of analysis.

The real source of the apparent inconsistency in the transformation problem lies in the use of inappropriate assumptions and modeling techniques to interpret Capital. Marx’s analysis is internally consistent given his method, his purpose, and his crucial recognition of the necessity of money as a representative of value under capitalism.

Marx’s primary purpose in Capital, of course, was not to theorize market prices, but to dig beneath market appearances “to reveal the economic law of motion of modern society” (Preface to Volume I, first edition). Moseley argues, rightly I think, that Marx found the key to the motion of capitalist society, the root of its explosive crisis-ridden dynamics, in the competitive production of profit or surplus value.

The explanation of profit was thus Marx’s first and guiding goal. Here, Marx had to resolve a crucial problem — one that had vexed his predecessors in classical political economy, like Adam Smith and David Ricardo, who had adhered to the labor theory of value.

How is the creation of a profit for the economy as a whole consistent with the system-wide value equivalence of market exchanges? In other words, how is macroeconomic production and accumulation of surplus value consistent with the conservation of value in exchange? Marx’s answer, set out in Volume I of Capital, is that in labor power capitalists find a commodity uniquely capable of producing new value through its expending of new labor in production.

It is worth re-emphasizing the primacy of surplus value in Marx’s analysis in light of the absolute failure of neoclassical economics to generate a viable explanation of the origins of profit. The incoherence of neoclassical marginal productivity theory was clearly established by the Cambridge capital critique stemming from the work of Sraffa, Joan Robinson and others after the Second World War, and since then the neoclassicals have completely given up any attempt to explain the source of aggregate profits.

For Moseley, the primacy of the theory of surplus value is closely bound up with the sequential method Marx employs to develop and present his overall analysis of capitalism. Reflecting the reality that surplus value must be produced before it can be distributed, Capital first considers the determination of the aggregate quantity of surplus value and the aggregate rate of profit on the level of “capital in general” (defined by what all individual capitalist enterprises have in common).

Through abundant documentation from the preparatory drafts and published versions of Capital (including the full text for Volume III prior to its editing by Engels), Moseley establishes Marx’s undeviating insistence that total value and surplus value are determined on the macroeconomic level prior to the microeconomic formation of prices of production, and that the aggregate value quantities are not modified by the prices of production.

Marx’s sequential determination differs from the simultaneous determination method employed by the standard interpretation of the transformation problem (and unfortunately by many Marxist interpretations as well). Under this latter view, a proper transformation entails the simultaneous solution of separate value and price systems, both of which are disaggregated by industry — leading to the conclusion that Marx erred in not simultaneously converting input values into input prices of production.

In Moseley’s interpretation, by contrast, Marx’s analysis is comprised by a single system that is treated sequentially, first on the aggregate level (production of surplus value) and then on the industry level (distribution of surplus value through prices of production). Specifically, Moseley suggests that the single system employed by Marx is the circuit of capital:

in which capitalists first use money (M) to purchase commodity inputs (C) made up of labor power (LP) and means of production (MP), followed by the production process (P) from which emerges commodities containing value C’ > C which are then sold for an amount of money M’ > M (assuming profits are positive).

As noted earlier, the source of the money profit (M’ – M) is the surplus value added by labor power relative to its own value. That the circuit of capital starts and ends with money is closely connected with a crucial feature of Marx’s sequential single-system approach according to Moseley: for Marx, there is no dichotomy between value system and price system.

The dichotomy between value and price in the standard interpretation only results from the failure to recognize that the object of Marx’s analysis is real world capitalism in which values (socially necessary labor times) necessarily take on the appearance of money and monetary prices.

Marx insists that values have to be represented by money, and the various contradictions generated by this necessity are a crucial concern of the value-form analysis throughout Capital. [For an ecological interpretation of Marx’s dialectical value-form analysis in this respect, see my book Marx and Nature: A Red and Green Perspective (1999/2014)].

In short, there is no abstract non-monetary “value system” in Volumes I and II that is then suddenly transformed into a price system in Part 2 of Volume III. There is only one monetary price system which is treated sequentially, first on the aggregate level and then on the level of individual industries—but always structured by the circuit of profit-seeking capital, of money seeking to expand itself.

Crucially, Moseley shows that throughout Capital and its preparatory works, Marx consistently treats the initial capital invested (M – C [LP, MP]), including the values—as measured by money—of LP and MP, as given, pre-determined quantities of money.

In this way, Moseley establishes the logical and mathematical consistency of Capital’s theory of value and surplus value across macro and micro levels. This consistency is in no way damaged by Marx’s simplifying assumption, for expository purposes in Volumes I and II, that inputs are purchased at the monetary equivalents of their values.

The key point is that these money capital investments are quantitatively predetermined. Given his sequential, monetary, and single-system approach, in other words, it would have been inappropriate for Marx to have “transformed the inputs” in his derivation of prices of production.

The standard interpretation, by contrast, uses an imaginary disaggregated “value system” which is simultaneously converted into a disaggregated “price system” with no formal recognition of the necessity of money as a representative of value in capitalist economies.

This reliance on a non-monetary “value system” as a point of departure surely has Marx rolling over in his grave. Marx had nothing but derision for those (like the Utopian socialist “time chitters”) who dreamed of a system of market allocation directly regulated by labor times using “labor money” rather than an independent monetary measure of value (see the discussion in the Grundrisse, “Chapter on Money”).

Worse, beginning with Paul Sweezy’s Theory of Capitalist Development (1942), this standard interpretation has been the main starting point for discussions among Marxists on the transformation problem and how to respond to it. Moseley demonstrates through a detailed review of the literature that the failure to recognize the key role of sequential logic, money and the circuit of capital in Marx’s analysis has led to serious weaknesses and contradictions in alternative Marxist “solutions” to the transformation problem.

This, in turn, has increased the apparent relative attractiveness of non-Marxist alternatives, including even Sraffian theory—which is basically a purely physical input/output analysis mathematically overlaid with a scalar “price system,” i.e. a system of prices without money!

In sum, to understand Capital one should be conscious of the method Marx employed. Moseley’s sequential single monetary system interpretation seems attractive in that it finds a logical consistency in Marx’s analysis in spite of the apparent ambiguities that many have detected in Marx’s texts. By comparison, the standard interpretation has Marx making implausible errors of logic—forgetting to transform the inputs into prices of production, and basing his entire analysis of exploitation and capital accumulation on an internally inconsistent value theory.

Moseley’s interpretation establishes the internal coherence of Marx’s theory, thereby creating a more solid basis for its further development on our own, Marxist, terms. Stated differently, there is no need to import unrealistic, abstract-ideal concepts from other economic theories in an attempt to “modernize” Marxist economics.

This is important given the stronger explanatory power of Marx’s analysis of capitalism based on the labor theory of value—especially its explanations of money, class conflict (over wages and the length and intensity of labor), industrial division of labor and technology, the concentration and centralization of capital, inequality, unemployment, and economic crises.

Moreover, we are only beginning to tap the great potential of Marx’s analysis as a framework for understanding contemporary ecological crises, including climate change. Thanks to Moseley’s work we now, more than ever, have our own ground to stand on in developing economic analyses in service to the working class and the movement toward a post-capitalist system of sustainable human development.