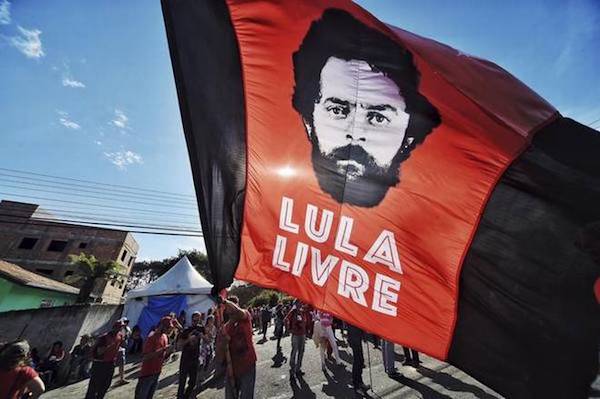 In this July 8, 2018 file photo, a supporter of former Brazilian President Luiz Inacio Lula da Silva waves a banner decorated with an image depicting da Silva and message that reads in Portuguese: “Free Lula,” in front of the Federal Police Department where he is serving jail time, in Curitiba, Brazil. | Photo Credit: AP

Luiz Inácio Lula da Silva waits in a 15 sq m room in a penitentiary which he himself inaugurated when he was the President (2003-2011) of Brazil. He has been condemned to this cell in Curitiba by a judicial process that has his supporters outraged and his detractors gleeful. A week ago, judges went back and forth over whether he could be released while he appealed a verdict on a corruption case known as Operation Car Wash. WhatsApp messages flashed across Brazil, the measure of the country’s polarisation evident in what was being said. By the end of the day, Mr. Lula remained in jail. His habeas corpus petition was not to be honoured.

Brazil faces a presidential election on October 7, and Mr. Lula is the candidate of the Worker’s Party (PT). It does not matter that he is in prison. The PT is adamant that it is either Mr. Lula or no one; there is no Plan B. An electoral court will decide, by late August, on the merits of allowing Mr. Lula on the ballot. Every poll taken in 2018 has shown him in the lead of his right-wing opponent, Congressman Jair Bolsonaro. There is little indication that Mr. Bolsonaro, who is deeply unpopular, will be able to better Mr. Lula.

Mr. Lula’s tenure as President was not marked by any radical shifts in policy direction. His was a social democratic presidency at a time of high commodity prices — a benefit for Brazil’s faltering economy. He moved a considerable amount of public finances towards combating hunger and increasing opportunities for education. The social minorities gained from his programmes. Hunger, a serious problem in Brazil, vanished and new federal universities opened to great promise.

Mr. Lula’s successor, Dilma Rousseff, had to grapple (2011-2016) with the detritus of the 2007-08 credit crisis, the turbulence in Brazil’s economic situation, and a restive elite. Conciliation towards the financial class resulted in Ms. Rousseff losing support among the core base of the PT. But her term was to remain until 2018. Professor Valter Pomar, a national leader of the PT, says no political attempt by the elite was able to prevent either Mr. Lula from being re-elected in 2006 or Ms. Rousseff from winning in 2010 and 2014. The elite, worried that they would be defeated once more if they waited till 2018, and impatient to rid themselves of a social democratic government, conjured up street protests and urged a legislative coup against Ms. Rousseff. She was ejected and replaced by Michel Temer, who was far more acceptable to the elite. The economic elite were now given rights to exploit natural resources freely, ignore labour laws, and conduct financial transactions deleterious to the public exchequer.

The problem of Mr. Lula then asserted itself. He remained Brazil’s most popular figure. A corruption investigation against him had stalled. Then, based on flimsy evidence, Mr. Lula was hastily found guilty and packed off to prison this April. Even members of the elite agree that there is no evidence against him. But no one wants to come out and say so. Senior politicians, many of whom stand to benefit from Mr. Lula’s erasure from Brazil’s political stage, remain silent.

The elite dragged the judiciary into their messy political world. But the military is in no mood to re-enter the political world directly. General Ernesto Geisel, the second last leader of the dictatorship, has admitted that military rule corrupted the officer corps and ruined morale. It is unlikely that the army will leave the barracks. For the elite, there is no established political figure to take on Mr. Lula. Mr. Bolsonaro is not their candidate. He is a marginal figure who is disliked by many of the elite. His antediluvian comments about minorities make him out of step with the times.

Brazil’s National Justice Council has opened an investigation of the chaos but it is unlikely that its report will solve the rot that has now entered the judicial establishment. Neuri Rossetto, the coordinator of Brazil’s Movement of the Landless Workers’ Movement, has said that this crisis of state institutions will have serious repercussions for the legitimacy of Brazil’s institutions.

All that is certain is that conflict is on the agenda in the country. From late July, 11 popular leaders will begin an indefinite hunger strike, with each of them carrying a sign with a name of one of the 11 Supreme Court judges. On August 10, the trade unions have called for a general strike for Mr. Lula. Four hundred thousand peasants will march from across Brazil to the capital in mid-August. Musicians will hold concerts, while celebrities will have an audience with the Pope. The mood is clear: come back Mr. Lula, because the crisis is too confusing and dangerous.

Professor Pomar says that it is likely that the courts will deny Mr. Lula’s right to be on the ballot. This does not offer a clear advantage to the right wing. Divisions within the ‘camp of the coup’, as the right wing is called these days in Brazil, and their disregard for Mr. Bolsonaro suggests other possibilities. Mr. Lula might anoint the president of the PT, Gleisi Hoffmann, to run in his place or there might be a call to boycott the election. The crisis, according to Professor Pomar, will be prolonged till the weeks before the October vote.

What is clear is that Mr. Lula, or at least the myth of Mr. Lula, dominates discussion in Brazil. It is not the PT that commands the allegiance of the millions who are now members of the party and the many millions more who would vote for Mr. Lula. It is clear that it is Mr. Lula to whom they turn.

Meanwhile, Mr. Lula has been prevented from seeing reporters but is allowed to use his Twitter account and see visitors. From his cell, he wrote this week that he feels “indignation at the suffering of the poor Brazilians”. The hashtag for these tweets is straightforward: Lula’s Message (RecadoDoLula). Another hashtag that is doing the rounds is Mozão—I love you. It refers to Mr. Lula.