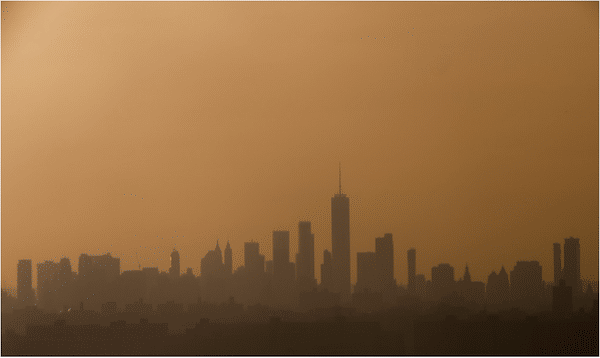 The skyline of Manhattan at sunset in New York, May 23, 2018. Photo: Saul Loeb/AFP/Getty Images

This Sunday, the entire New York Times Magazine will be composed of just one article on a single subject: the failure to confront the global climate crisis in the 1980s, a time when the science was settled and the politics seemed to align. Written by Nathaniel Rich, this work of history is filled with insider revelations about roads not taken that, on several occasions, made me swear out loud. And lest there be any doubt that the implications of these decisions will be etched in geologic time, Rich’s words are punctuated with full-page aerial photographs by George Steinmetz that wrenchingly document the rapid unraveling of planetary systems, from the rushing water where Greenland ice used to be to massive algae blooms in China’s third largest lake.

The novella-length piece represents the kind of media commitment that the climate crisis has long deserved but almost never received. We have all heard the various excuses for why the small matter of despoiling our only home just doesn’t cut it as an urgent news story:

Climate change is too far off in the future; It’s inappropriate to talk about politics when people are losing their lives to hurricanes and fires; Journalists follow the news, they don’t make it—and politicians aren’t talking about climate change

Every time we try, it’s a ratings killer.

None of the excuses can mask the dereliction of duty. It has always been possible for major media outlets to decide, all on their own, that planetary destabilization is a huge news story, very likely the most consequential of our time. They always had the capacity to harness the skills of their reporters and photographers to connect abstract science to lived extreme weather events. And if they did so consistently, it would lessen the need for journalists to get ahead of politics because the more informed the public is about both the threat and the tangible solutions, the more they push their elected representatives to take bold action.

Click here to read the full article at The Intercept.

Naomi Klein is author of “This Changes Everything: Capitalism vs. the Climate.” Her new book, “No Is Not Enough: Resisting Trump's Shock Politics and Winning the World We Need,” will be published in June.