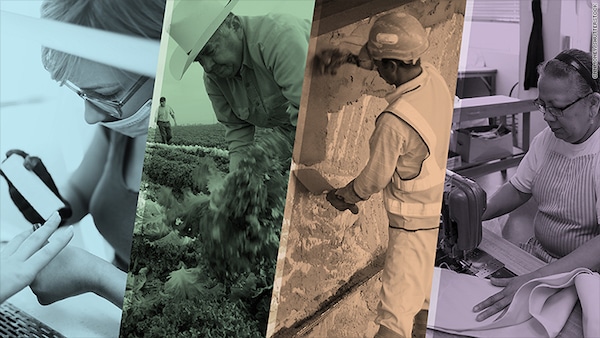 Immigrant workers are most likely to have these jobs CNN Money

He says, “No American should lose their job because an employer wants to hire lower-cost foreign workers.” He criticized Bernie Sanders’ group “Our Revolution” for firing its “National Justice” director who is part black and part Latina. She pointed out that excessive immigration can hurt low-wage American workers.

Trump is a member of the ruling class, who seeks to maintain and strengthen its domain, as is Bernie Sanders. They take different paths to preserve capitalism and the ruling class’s interest. It’s all about the 1% to 10%, who owns a good proportion of the wealth and means of production.

Part of Trump’s “Make American Great Again” package, in addition to keeping jobs in the U.S., is to prevent immigrants from taking jobs. Too many of the white working class fell into the trap and got Trump elected over these things. We blacks should not fall into the same mode.

Worker exploitation, racism, sexism, and homophobia will always remain as long as capitalism exists. Malcolm X said, “You can’t have capitalism without racism.” I add that these things live with or without immigration. They all adversely affect African Americans and immigrants, who are mostly people of color.

Borrow a page from Karl Marx, who wrote about the importing of Irish workers to England. It pushed English workers’ wages down. Marx’s main point was that this occurrence mainly drove a wedge between English and Irish workers under capitalism.

For the English worker, the immigrant was a low-life sent to compete for native jobs that lowered the living standards of the English worker. The ruling classes by hook and crook sought to maintain this division. It is a division that weakened the working class. Does this scenario sound familiar today?

Demand a $15 an hour minimum wage for all now. Create public service jobs to fix the U.S. infrastructure. Amnesty for all immigrants.