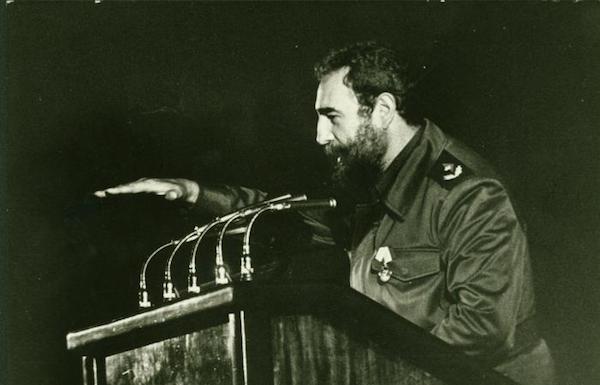 I have attempted to find a formula that synthesizes Fidel Castro, who is now 92, and continues at our side, and whose imprint touches every aspect of life, every sector of society, friends and enemies, young and old, the healthy and the sick, heads of state and the homeless of the world.

His internationally recognized work includes the idea that a genetic study be done of several Latin American countries, which not only revealed how much inequality and abandon existed, but also that there were ways to cure the sick and to socially help the forgotten of the Earth.

I resorted to the Royal Academy dictionary of the Spanish language and found a definition of genius, convinced that Fidel was one:

Extraordinary mental ability to create or invent new, admirable things. A person with the gift of genius.

I returned to his Reflections and two books which, one afternoon in the University of Havana’s Aula Magna, he presented and dedicated personally to each one of us who had participated in the Mesa Redonda television news talk show. One of these, the La victoria estratégica, (Strategic Victory) recreates his childhood and adolescence with stories of his native Birán, his student years at the La Salle and Dolores Colleges in Santiago de Cuba, and the Belén Jesuit College, when he made the decision on his own to move to Havana.

When he graduated from this last educational institution, noted in the school yearbook was the following:

Fidel Castro (1942-1945). He distinguished himself in all subjects related to letters. With excellence and team spirit, he was a true athlete, always defending the college’s honor with courage and pride. He was able to win the admiration and affection of all. He will study Law and we have no doubt he will fill pages of brilliance in the book of his life. Fidel has the wood and will not lack the artistry.

Those who knew him and followed him throughout his years at the University of Havana, from the beginning described him as a natural leader. Those who joined him for the Moncada spared no opportunity to express their admiration for his commitment to Martí’s thought and his ability to organize and lead an “assault on heaven,” on Saint Ann’s day in Santiago.

In prison, he is remembered as the intrepid Fidel, who challenged the Batista henchmen, and as an attorney, turned his trial around, to accuse the criminals who murdered so many youth, and in the first place, Fulgencio Batista.

Upon his release from the so-called model prison on the Isle of Pines, his vocation as a patriot, his determination to struggle to free his country from so much disgrace as he had proposed in 1853, and his decision to make a revolution, led him to Mexico, where he organized the Granma expedition, to return to the homeland and continue the struggle.

In the Sierra Maestra, after the agonizing first days, he was able to exclaim, “Now we have won the war!” when only 12 men were reunited after the initial fighting.

He was a great strategist who moved his comrades across a vast, mountainous area, and organized columns to march toward central and western provinces, to light the revolutionary flame throughout the country.

In the heat of battle he conceived a way for the rebel voice to be heard across the nation, and along with Che, created Radio Rebelde. Years later, with the Revolution in power, in conferences and gatherings with journalists showed himself to be a communicator par excellence. He appeared on talk shows like te Mesa Redonda, writing and publishing his reflections, and sharing with colleagues in many part of the world his vocation as an untiring fighter and sure leader.

After the triumph of the Revolution, he told his men and the entire people that the most difficult stage of the struggle had begun: that of constructing a new country. He did not wait long to promulgate the agrarian reform to give land to the campesinos who worked it and eliminate vast land holdings.

When the mercenary invasion landed at Playa Girón on the Bay of Pigs, he commanded and participated in the fighting, handing U.S. imperialism its first defeat in Latin America.

His life was conducted alongside the people, thinking and taking action to make the revolutionary process irreversible.

No subject was foreign to him, not as a head of state or as a student of every problem facing humanity.

He was capable of conceiving an inclusive model of health care that brought doctors to the people; developed the Cuban concept of the family doctor that would later be extended to other countries, with our people demonstrating the essentially internationalist and human nature of the Revolution.

He foresaw that the future would be one of science, and created scientific poles as the model of research, development, and production of pharmaceuticals, many one of a kind on the planet and others only available in the so-called First World.

Fidel’s internationalist approach of offering what Cuba has, not what is left over, had its first expression in Algeria, when on May 23, 1963, the first 29 Cuban doctors and nurses traveled to this country.

On the military plane, the most complete expression of this internationalism was seen in Angola, “Paying our debt to humanity,” as he described our duty to help other countries of the world.

Perhaps the imperialists never thought our small country, 10,000, 12,000 kilometers from Angola, would be capable of such tenacity, such perseverance, such determination, and maintain our military and civilian collaboration with this country for 11 years.

Fidel, his political and military genius, the ethics and optimism of a victor, are impossible to capture in a few lines.

Thus I prefer to cite two statements from other sources. One by Hugo Chávez, who defined Fidel as,

A father, a comrade, a master of perfect strategy.

And the well-known comment of Raúl’s, when he said, “Fidel is Fidel.”