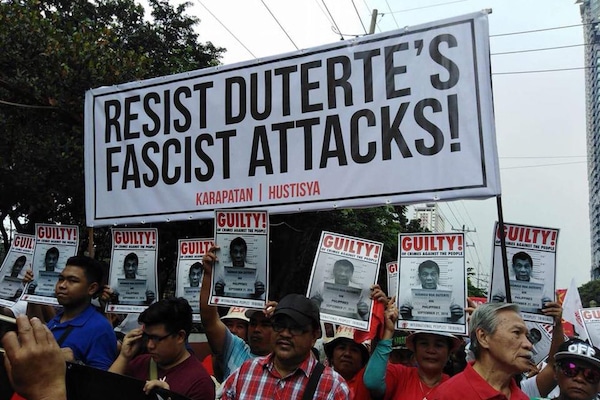 A story from the northern Philippine province of Abra: on March 16th and 17th last year Philippine armed forces dropped bombs(1) containing illegal and toxic white phosphorus.(2) The pasture lands and communal forests of farmers and indigenous peoples were burnt and people did not participate in daily economic activities out of fear. The military was also accused of restricting the delivery and purchase of food.(3)

In southern Philippines, the indigenous Lumad peoples’ of the resource-rich Mindanao have faced continual attacks from government. Lumad school teachers have been falsely arrested(4) by the Philippine police. The Education Department attempts to discourage their operations,(5) and military encampments have been set up in Lumad communities. The military establishment claims the schools are “fronts” of Maoist revolutionary organisations. In contrast, the Lumad—backed by the history of indigenous peoples—see the harassment against them as part of a an effort to facilitate the entry of mining corporations keen on extracting resources from their ancestral lands.

The injustice of tyranny

The story of the Lumad point to decades of entrenched economic policy that is reliant on the panacea of “private investment”—usually from domestic elite families and from international capital (which are not necessarily distinct). And while linked to historical injustices, under the Duterte administration the continuing threat of corporate plunder has been matched by the emerging threat of a rising tyranny and state oppression—to the point, as noted above, of using banned phosphorus bombs on communities. The implications of this rising tyranny on the people’s right to development are grim. 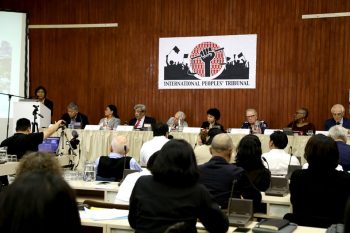 As a juror remarked during the recent International Peoples’ Tribunal on the Philippines(6) (IPT), “the defendant Duterte has created new forms of attacks [on people’s rights] as well as intensified the old ones.” It would not be farfetched to say that, for the witnesses, expert opinions and the jury’s verdict at the IPT, the U.S.-backed Duterte government had been using three pretexts for killing the Filipino poor: they are “drug peddlers/users”, “Muslim terrorists” or affiliated with the left.

The ever-worsening attacks on people’s political, economic and social rights, as well as the people’s right to development under the current US-backed Duterte administration has made it ever more necessary to hold the IPT last September 18 to 19.(7) The IPT had been a people-led process, which had representatives from affected people’s organisations to testify and present expert opinions on how political, economic and social rights are being violated by the current administration. 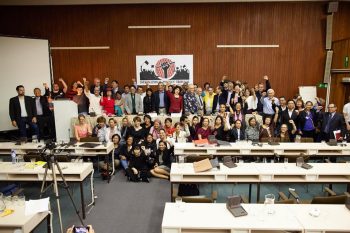 The participants at the IPT 2018 meeting in Brussels, Belgium. Photo courtesy of the International Peoples’ Tribunal 2018 Facebook page.

The IPT charged and rendered guilty both Duterte and Trump as representatives of the governments of the Philippines and the U.S., respectively.(8) It did so on the basis of continued influence of U.S. foreign policy on the Philippine government. Indeed in the Philippines, for instance, with the administration’s current “counterinsurgency” Oplan Kapayapaan(9) (“kapayapaan” translates to “peace”) the U.S. has launched its new “counter-terror” Operation Pacific Eagle.(10) This violates the principles of the people’s right to development,(11) which states that international cooperation should be towards an “international economic order based on sovereignty, equality, interdependence, mutual interest…[and] the observance and realization of human rights”.

The stories above, of the Lumad indigenous peoples’ schools and the Lumad under Martial Law, as well as that of indiscriminate bombings in indigenous communities in Abra, have been heard in this people’s tribunal. The jurors, made up of eight people’s lawyers from all over the world, gave the verdict of “guilty” to the U.S.-backed Duterte administration.

The UN Declaration on the Right to Development posits that “equal attention and urgent consideration” should be given to civil, political, economic, social and cultural rights “in order to promote development.” Moreover, the right to self-determination is especially pertinent since through this, peoples “have the right freely to determine their political status and to pursue their economic, social and cultural development.”

The stories of the Lumad and the people of Abra, while not exhaustive of the various cases presented at the IPT, are highly representative of violations to the right to development and self-determination.

Decades of neoliberal policy in the Philippines have deprived especially the poor of the opportunity to participate and contribute in shaping the development policy they want, especially indigenous peoples whose oppression includes assaults on their indigenous political and economic practices and structures.

With the worsening tyranny under Duterte and his Oplan Kapayapaan, the Lumad peoples’ right to self-determination and their right to freely choose their own development encounter worse threats when, aside from ongoing militarisation, the Philippine president himself threatened to bomb their schools(12) and handpick the investors(13) to extract resources from their ancestral domains. Not to mention how this further emboldens the military who had killed members of Lumad groups(14) on accusations of being members of Maoist revolutionary organisations. Farmers and indigenous peoples in Abra have been deprived of their “inalienable right to full sovereignty over all their natural wealth and resources” (as stated in the right to development).

We should remember that Duterte is the first president since the late dictator Marcos to have implemented Martial Law (through his supermajority in Congress). For now this covers the whole island of Mindanao but could expand to the whole country. Under continuing Martial Law, the government has been proud to promote that it has been mostly eyeing big Chinese firms to lead the “rehabilitation” of the destroyed Marawi City,(15) with limited influence for displaced Moro peoples.

With the guilty verdict against the U.S.-backed Duterte administration, Philippine people’s organisations have not ceased to assert their rights, including to development and self-determination. Along with the various ongoing local campaigns, movements held mobilisations against the rising tyranny in the country on September 21—the date when Martial Law was declared by the late dictator Marcos, and serves to mark a date of continued resistance to the threat of dictatorship in the Philippines today.

According to the Algiers Declaration,(16) a rights document formulated by non-governmental organisations in 1976, every people “has the right to choose its own economic and social system and pursue its own path to economic development…without any foreign interference.” Furthermore, peoples have “the right, if they are under subjection, to fight for their liberation,” “to break free from any colonial or foreign domination, whether direct or indirect”. These are claims the Filipino people and its movements have long asserted—and they are expected to continue efforts to break free from these obstacles to democratically-owned development today.

Amy Padilla is the Executive Director of IBON International (www.iboninternational.org), a Southern international non-government organisation that engages in capacity development for people’s rights and democracy around the world. She has been a development worker for over two decades.