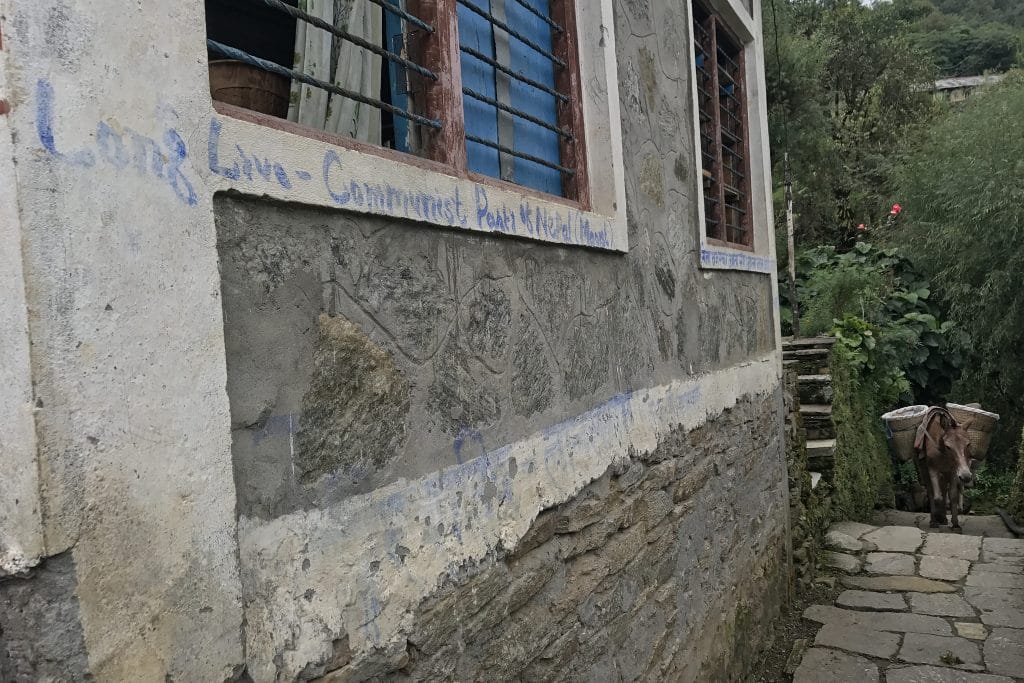 Revolutions and even near-revolutions are earthmoving events that leave a profound mark on any society. They change basic norms, redefining the social modus operandi, and just as often turn against their own children like the mythical Saturn. In Nepal, one can see how an almost-brought-to-completion revolution – led by a powerful and creative Maoist movement – has produced divisions among its leaders who are now desperately trying to regroup, reorganize, and get moving again.

I have come to Nepal from Venezuela to learn about and above all learn from the revolutionary experience here, thinking about how it might shed light on my own Latin American context and the challenges our revolutionary processes are facing. Like Latin America’s republics, the Nepali nation-state has an approximately two-hundred-year history, and it is one of repeated waves of struggle. A tumbling of the Rana oligarchy in 1951 led to a brief-democracy, followed by four decades of the Panchayat system of absolute monarchy. In 1990, pressure from a wide political front forced the monarchy to open up to formal, multiparty democracy again.

This is when Nepal’s Maoist revolutionary movement really got going, though its roots date back at least to the 1960s. From the beginning, fortuitously or not, the Nepalese Maoists saw the emptiness of the representative democracy taking shape in their country in the post-Cold War era. When their 40-Point Demand for social, economic and political justice was not met, they launched a People’s War that lasted from 1996 to 2006.

As is the Maoist custom, they established rural base areas and emancipatory forms of self-government, most often in regions with significant indigenous-janajati populations. They raised the banners of federalism and indigenous rights, calling for a “New Democracy” that would stamp out the remains of Hindu feudalism in Nepalese society. That platform was to be the first step in a long march toward socialism.

Success followed success for the Maoists despite growing US intervention after 9/11 and the calculated anti-terrorist hoopla that came with it. By 2004, the Nepali Maoists had come to exercise relative control over more than 80 percent of the national territory. Royal power suddenly ended in 2006 when a broad front involving both Maoists and non-Maoists staged a massive general strike. Still, the complicated peace process that ensued brought with it a “shifting of goalposts”: the objectives of constituent assembly and federal republic stole center stage from New Democracy as the main Maoist goal (I am simplifying radically).

Bogged down by a slow peace process and a not-very-satisfactory constituent assembly, the Maoist movement fractured into diverse strands. The three main leaders that include Prachanda (Pushpa Kamal Dahal), Kiran (Mohan Baidya), and Baburam Battarai went their separate ways. Kiran was the first to leave. This respected intellectual – his nom de guerre means “light ray” – separated in 2012 claiming that New Democracy (democracy without feudal elements and comprador capitalists) was still the goal.

Several years later Baburam left, who had been key to the movement’s outreach to Nepal’s growing middle class, among other important roles. He now heads up the Naya Shakti (New Force) party. Once part of the Kiran fraction, Biplav (Netra Bikram Chand) also took his leave. He is now forging a growing movement of youth and former Maoist combatants, who think about returning to armed struggle.

Meanwhile, the Maoist party’s supreme leader Prachanda ably changed horses and organized a fusion with UML, Nepal’s traditional parliamentary communist party, to form NCP (Nepal Communist Party). Since early this year, that party has ruled in Nepal, with K. P. Oli as Prime Minister for now and Prachanda in the offing.

A revolutionary event of this kind – like the Nepali Maoist’s meteoric rise – is usually said to mark “a before and an after.” Yet the “after” can mean quite different things depending on the individual or tendency involved. For some, the “after” might amount to fully entering the political gamesmanship of Nepal’s booming capital city. For others, it might mean retrenching to a still-valid orthodoxy (Kiran). Again, others have begun a process of soul-searching that attempts, perhaps with false starts, to develop new theory addressing the new conditions (Biplav and Baburam).

In his time, Mao Zedong discovered a principle valid for every revolutionary movement. His discovery was that there will be more than one line of struggle in a party, and it makes no sense to eliminate the visible heads of (what one sees as) an incorrect, revisionist line. The party need not divide over these issues but should permit struggle within. This is because struggle among tendencies is endemic to the popular movement. It is not solved by eliminating leaders, as Stalin thought.

When I spoke with Kiran in his home in the northern outskirts of Kathmandu, he explained that one of the still-to-be resolved issues for Nepal’s Maoist movement is the question of how precisely to manage inner-party struggle. Allowing for all the difficulties of simultaneous translation, I render his thought as follows:

How do you carry out inner-party struggle? What is the modality for conducting it? And the other thing is that, during the course of the movement, people, cadres, leaders could also get deviated. There will be deviations of various kinds. So how do you correct and what measures do you take?

Revolutionaries of the world, including those of Latin America and my own home turf Venezuela, take note! Our movements have not been sufficiently respectful of inner-party struggle, tending to silence internal dissent and debate. Yet the Nepali Maoists, whose debate is alive, even if now from separate camps, have a lesson for us: quelling such struggle and debate is, if not the death of a revolutionary party, at least a serious weakness!

Meanwhile Biplav, whom some accuse of eclecticism, is trying to revitalize and revive the revolutionary movement in the fullest sense. This somewhat younger leader is calling for a “United People’s Revolution,” which in a heterodox way accepts a more central role for the middle class and skilled workers in the struggle. He also believes that we live in a world of “post-imperialism” (which in my view would better be called “new imperialism”). His group has developed the term to mark the changes occurring since Lenin’s famous essay on the subject.

Whatever the theoretical bones one might have to pick with Biplav’s tendency – and remembering that Marx himself said that a single concrete step forward in the real movement is worth a dozen programs – this leader is advancing on the ground. Charismatic, Biplav is strong in the western Ropla region, which was the original Maoist base area. He is going forward despite persecution by the state, and even Kiran, who thinks Biplav is somewhat theoretically haywire, says his movement is impressive and has its own strengths.

Will the old mole of the Nepali revolution, now gone underground, emerge again? Of course, no one can know for sure. Still, one can see that a varied group of leaders are now engaged in the patient work that Marx would likely consider good “burrowing”. Every revolutionary I have spoken with here has said that “objective revolutionary conditions” abound, including poverty, “feudal remnants,” and Indian and U.S. domination. As far as subjective conditions are concerned, which refers to the people and movements who will actually make the needed changes, at least the diverse tendencies are hard at work forging them.