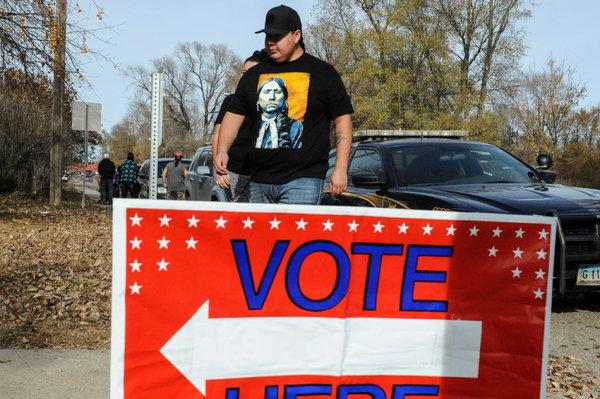 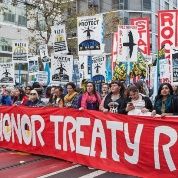 Earlier this month, the U.S. Supreme Court upheld a ruling that requires North Dakota voters to provide an I.D. with a residential address. The ruling has effectively made the process to vote next to impossible for Native Americans, who by-and-large do not have recognized addresses–but that’s not stopping them.

On Tuesday, the Spirit Lake Tribe filed a formal complaint against North Dakota Secretary of State Alvin Jaeger, and intends to sue the state. “Jaeger’s implementation of the residential address requirement has imposed severe—sometimes insurmountable—burdens on the right to vote for many voters on reservations. These burdens violate the First Amendment,” the legal document stated.

Others have been working overtime to meet the demands of the new law. Tribal office, volunteers, and Native American advocacy groups around North Dakota, like Four Directions, have been urgently supplying addresses and identification cards for residents, and they’re doing this for free. Usually, they’d charge five to 10 dollars for each.

If one hundred people are issued an ID that they can vote with, that would mean an investment anywhere from US$500 to US$1,000 from tribal governments. There are at least 30,000 Native Americans eligible to vote in the state.

On the Turtle Mountain Indian Reservation, they have printed so many IDs so quickly that their machine began melting cards as it overheated, New York Times reported.

“What people out there don’t understand is how much it costs a tribe to make sure that each and every individual tribal member has that right to vote,”  Oliver Semans, co-executive director of Four Directions told the newspaper. “The tribes have invested thousands of dollars, whether it’s equipment, man-hours, meetings. This has not come cheap.”

The process is arduous. Not only are offices issuing IDs, but they also have to assign an address to each home of a voter. This is especially challenging. Secretary of State, Al Jaeger’s office stated that voters could contact their county’s 911 coordinator and be assigned an address within an hour.

However, for residents of Standing Rock, where public demonstrations and legal battles over the Dakota Access Pipeline (DAPL) took place from 2016 to 2017, the 911 coordinator is the sheriff. This is intimidating for some who are afraid to reach out to law enforcement or give information on where they live to the sheriff.

During the DAPL protests, water protectors faced brutality from police and pipeline company workers as they fought to uphold tribal treaty rights, protect sacred lands, and prevent the construction of the pipeline.

“We didn’t ask for this fight to be brought right to our front door, like the Dakota Access Pipeline,” Chase Iron Eyes, an attorney with the Lakota People’s Law Project, and member of the Standing Rock Sioux Tribe. “Voter suppression is a very real thing, and it’s very clear that if your vote was powerless they wouldn’t be trying so hard to suppress it.”

Chase Iron Eyes, a former congressional candidate, was arrested during the DAPL resistance for allegedly inciting a riot and criminal trespass Feb. 2017. He had been facing a maximum of six years in state prison. In August, he was cleared of all major charges.

“When you suppress a people, they rise,” he said in a video in response to the voting law. “That’s exactly what’s going on right here in Standing Rock. In our hearts and in our minds we know the Indian Wars have not ended. They’ve only changed forms.”

In the weeks leading up to midterm elections, the stakes are high in North Dakota. In order to shift power in the Senate from Republicans and increase resistance to the Trump administration, Senatorial elections like the one in this northern state are particularly crucial. If the seat turns from Democrat to Republican, as the polls suggest they might, it would make it harder to oppose discriminatory policies, which have become a trend from the Trump administration, in Congress and the Senate.

The race is between Republican Kevin Cramer and incumbent Democrat Heidi Heitkamp. Heitkamp won the last election in 2012 by fewer than 3,000 votes with strong support from Native Americans, who tend to vote Democratic. Heitkamp voted against Brett Kavanaugh’s appointment to the supreme court in October. She is currently behind Cramer in the polls.

North Dakota is one of 24 states that have enacted voting restrictions by law since 2010. Supporters of the law argue that it’s needed to prevent voter fraud. However, there has only been one case of voter fraud in North Dakota in decades, the Guardian reported. Those that oppose it see it as a poll tax, and a way to disenfranchise minorities.

For Native Americans, who have been forced to live within the confines of reservations, often in poor conditions–who were forced to attend ‘assimilation’ schools where they were hit if found speaking their own language, who were made to abandon their tribal communities in the Dawes Act of 1887–this is another form of oppression and suppression.

“We didn’t need physical addresses when the boarding school agents and the police came looking for us to snatch our grandkids and take them to the boarding schools,” Iron Eyes said. “We didn’t need physical addresses when they came to pick us up when they drafted us to fight in their wars–World War One, World War Two, Korea, Vietnam, and so forth.”

“Now all of a sudden we need physical addresses to exercise one of our most basic fundamental rights in a representative democracy,” he said.