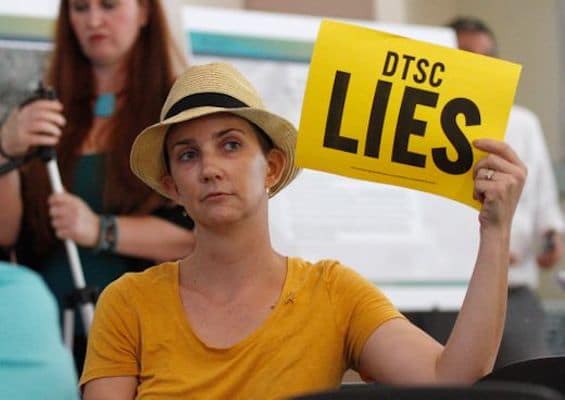 The tremendously destructive Woolsey Fire has been widely reported as beginning “near” the Santa Susana Field Laboratory (SSFL or Rocketdyne), but it appears that the fire began on the Rocketdyne property itself. Cal Fire identifies the fire location as E Street and Alfa Road, a location that is in fact on SSFL. It was recently reported that the “Chatsworth electric substation” experienced a disturbance 2 minutes before the fire was reported, but that substation is in fact on SSFL, near that location. A photograph posted on Twitter from KCAL9’s Stu Mundel shows the fire starting Thursday afternoon near the same location, which is only about 1,000 yards away from the site of the 1959 partial nuclear meltdown of the Sodium Reactor Experiment (SRE) reactor. 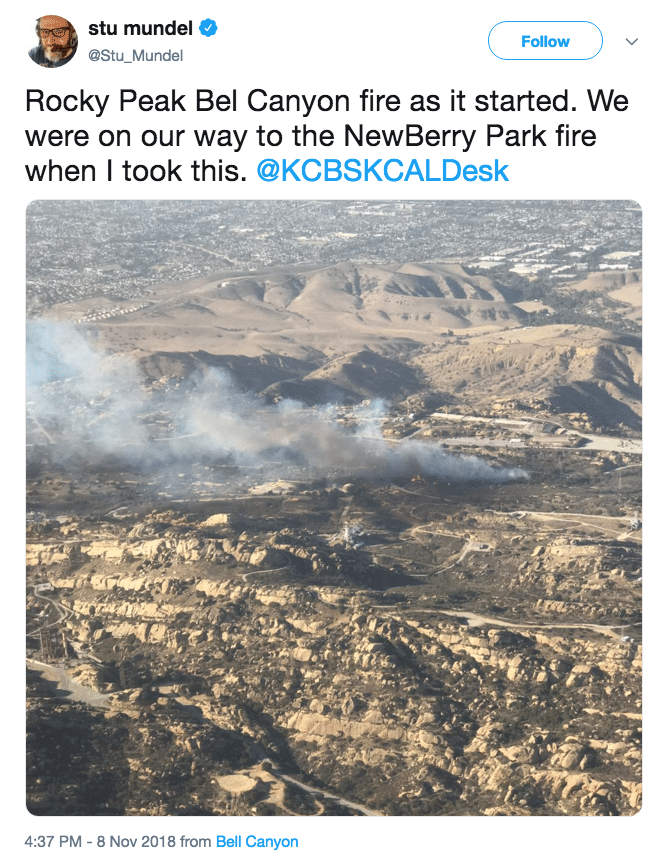 The location of the smoke plume and fire from the above photo is shown in the pre-fire Google Earth image below. 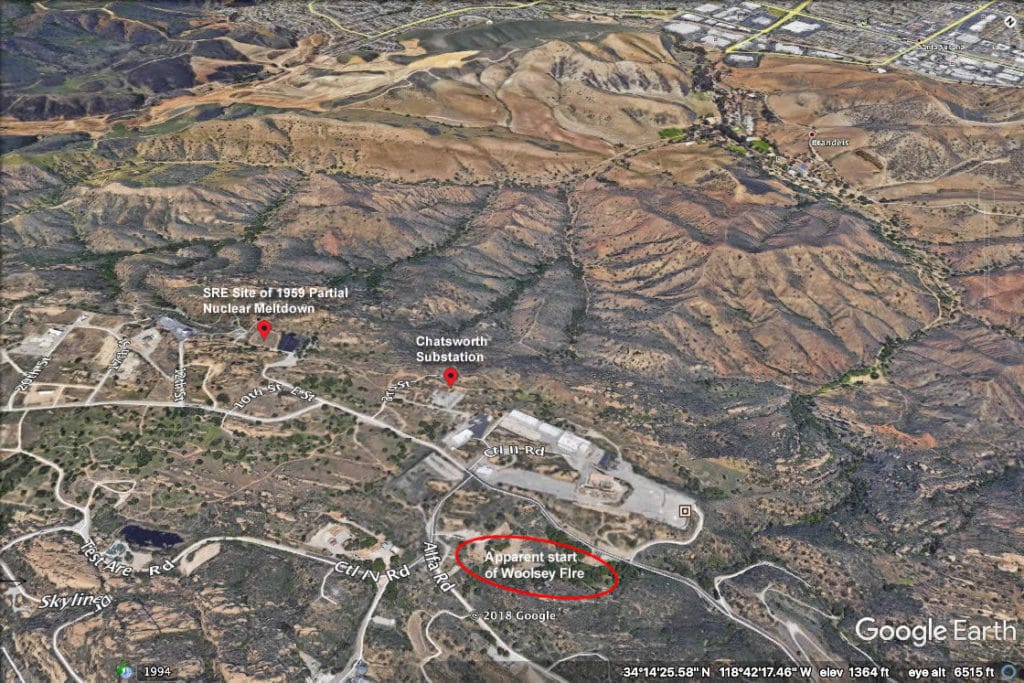 A report filed with the California Public Utilities Commission by Southern California. Edison states that the “Chatsworth substation” suffered an outage at 2:22 pm Thursday, two minutes before the Woolsey fire is reported to have begun. The Chatsworth substation is located “within the larger Boeing Rocketdyne Santa Susana complex,” according to a CPUC document (see bottom of page C-15 or page 17 of the pdf.) The electrical substation (marked with a pin in the photo above and a circle in the photos below, and enlarged in the last photo) is a few hundred yards to the west of where the fire is shown in the Thursday aerial photo as starting, and a few hundred yards to the east of the SRE complex, where the reactor suffered its accident. The substation had been built in part to provide electricity from the reactor, which was the first reactor to produce commercial electricity for the commercial grid, before it became the first such commercial reactor to suffer a partial meltdown. 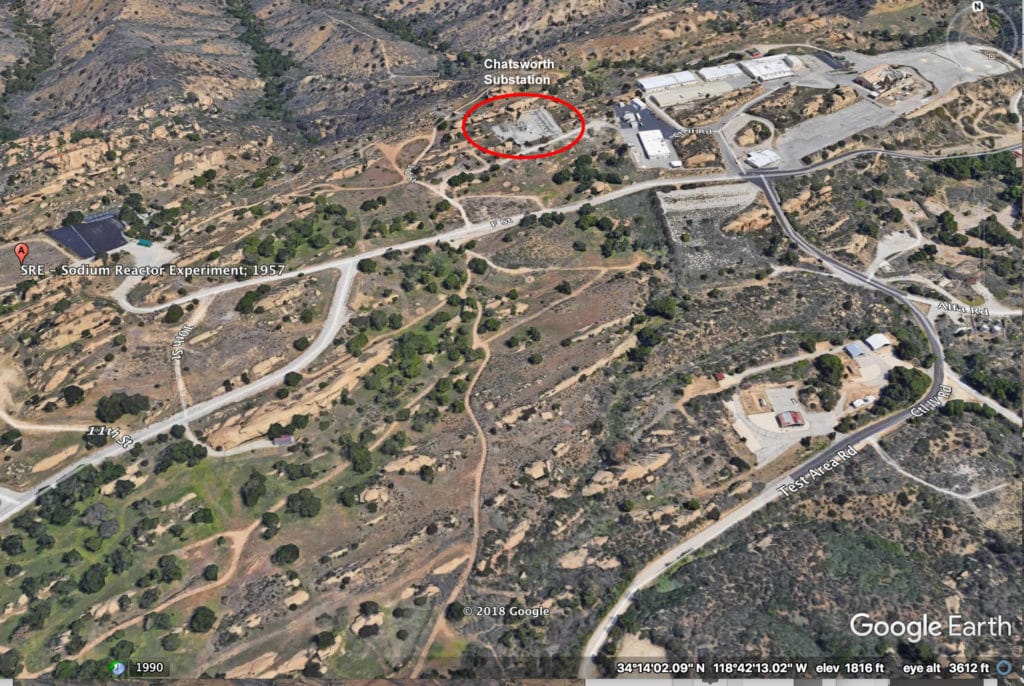 Chatsworth substation, between apparent site of start of fire to the right and location of SRE reactor partial meltdown to the left. (Photo Credit: Google Earth)

“Though we must wait for fire authorities to conclude their investigation, it is ironic that an electrical substation built for a reactor that melted down six decades ago now may now be associated with a catastrophic fire that began on the SSFL site that is still badly contaminated from that accident and numerous other spills and releases,” said Denise Duffield, Associate Director of Physicians for Social Responsibility-Los Angeles (PSR-LA.)

Cal Fire maps indicate that much of SSFL is within the fire boundaries.

Decades of nuclear and rocket-engine testing activity, including nuclear reactor accidents and other toxic spills and releases, have resulted in widespread contamination throughout SSFL’s 2,850 acre facility. Federally-funded studies indicate higher cancer incidents associated with proximity to the site. The California Dept. of Toxic Substances Control (DTSC), which has regulatory oversight over the parties responsible for cleaning up the contamination–the Dept. of Energy, NASA, and the Boeing Company–signed legally binding agreements to fully cleanup the contamination by 2017. However, the cleanup has not even begun and DTSC is considering vastly weaker cleanup plans. “If DTSC and those responsible for polluting SSFL had not broken their cleanup commitments, we wouldn’t be facing the prospect of contamination now being driven off site by the fire,” said Duffield.

“The Woolsey Fire likely released and spread radiological and chemical contamination that was in SSFL’s soil and vegetation via smoke and ash,” said Dr. Bob Dodge, President of Physicians for Social Responsibility-Los Angeles. “All wildfire smoke can be hazardous to health, but if SSFL had been cleaned up long ago as DTSC promised, we’d at least not have to worry about exposure to dangerous radionuclides and chemicals as well.”

“We’ve learned not to trust anything DTSC says, so we’re demanding independent testing and air monitoring for radiation and chemicals from SSFL,” said Melissa Bumstead, a West HIlls resident whose daughter has twice survived leukemia that she believes was caused by SSFL. Bumstead’s Change.org petition urging that SSFL cleanup commitments be upheld has been signed by over 430,000 people. “DTSC has made one broken promise after another, and it wasn’t truthful about SSFL’s contamination long before the fire started.” said Bumstead. “Why would we believe DTSC’s statement that the fire caused no additional risk, when they know they’re the ones responsible for SSFL still being contaminated in the first place?”

Marie Mason, Simi Valley resident and co-founder of the Rocketdyne Cleanup Coalition, agrees. “We’re outraged that after all these years, decades of foot-dragging by DTSC, an agency that is captured by polluters, may have resulted in even more toxic exposures. We’ve always worried about a fire at SSFL, and now a massive wildfire has started on site itself. SSFL could have and should have been cleaned up a long time ago.”

PSR-LA’s Duffield said, “While we must await the final investigation of the cause of the fire, the presently available evidence indicates it appears to have begun on the Santa Susana Field Lab, and the failure to clean it up has significantly increased risks to the public nearby.”

Physicians for Social Responsibility-Los Angeles (PSR-LA) is the largest chapter of the national organization Physicians for Social Responsibility and has worked for the full cleanup of SSFL for over 30 years.. PSR-LA advocates for policies and practices that protect public health from nuclear and environmental threats and eliminate health disparities.

Parents vs. SSFL is a grassroots group of concerned parents and residents who demand compliance with cleanup agreements signed in 2010 that require a full cleanup of all radioactive and chemical contamination at the Santa Susana Field Laboratory.

The Rocketdyne Cleanup Coalition, or RCC, is a community-based alliance dedicated to the cleanup of the Santa Susana Field Laboratory (SSFL), commonly known as Rocketdyne.