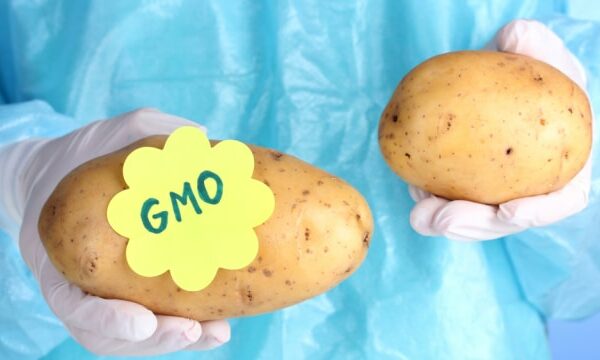 Of all the genetic engineers who have renounced the technology—Arpad Pusztai, Belinda Martineau, Thierry Vrain and John Fagan, among others—because of its shortsighted approach and ability to produce unintended and potentially toxic consequences, Caius Rommens’ story may be the most compelling.

Rommens was director of research at Simplot Plant Sciences from 2000 to 2013 where he led development of the company’s genetically engineered Innate potato. But over time, Rommens started to have serious doubts about his work and worried about potential health risks from eating the GMO potatoes, which are now sold in 4,000 supermarkets in the U.S.

Rommens’ concerns about the GMO potato led him to write a book, Pandora’s Potatoes, which was recently published. The book is a case study on how a scientist’s initial enthusiasm about genetic engineering turns to doubt and fear as he realizes the hazards the technology can create.

I recently interviewed Caius Rommens about his work developing the GMO potato and the misgivings he now has about it.

Please describe your work developing GMO potatoes and your position at Simplot.

Caius Rommens: I left my position as team leader at Monsanto to start an independent biotech effort at Simplot. During the 12 years I worked there, I designed a genetically modified potato that I believed was resistant to bruise and late blight, and that could be used to produce French fries that were less colored and less carcinogenic than normal fries.

The main genetic engineering of the Simplot GMO potatoes as described in your book was silencing genes called RNAi. What are some of the possible negative consequences of silencing genes?

CR: Ex-colleagues of mine had shown that PPO-silencing increases the levels of alpha-aminoadipate by about six-fold. Alpha-aminoadipate is a neurotoxin, and it can also react with sugars to produce advanced glycoxidation products implicated in a variety of diseases.

(A Monsanto GM corn variety, LY038, was found to have high concentrations of alpha-aminoadipate, and an application for its approval in Europe in 2009 was withdrawn after regulators raised safety questions.)

There is no data on the actual levels of alpha-aminoadipate in GM potatoes, but I believe that Simplot should carefully determine these levels.

Similarly, ex-colleagues had shown that the damaged and bruised tissues of potatoes may accumulate high levels of tyramine, another toxin. Such damaged tissues are normally identified and trimmed, but they are concealed, or partially concealed, and much of it is not trimmed in GM potatoes. Therefore, it seems important that Simplot should determine the full spectrum of possible tyramine levels in their GM potatoes.

Another potential toxin is chaconine-malonyl. There is little known about this compound, but ex-colleagues had shown that it is increased by almost 200 percent upon PPO-silencing. This should probably be investigated.

In your book you write that the GMO potatoes don’t eliminate bruising but just conceal it. Please explain.

CR: PPO-silencing prevents the darkening of bruises. The suppression of symptoms is so effective that we believed we had overcome the bruise issue. It took me a lot of time to understand that GM potatoes still have bruises—invisible bruises—that are just as damaged as the darkening bruises of normal potatoes. In other words, the invisible bruises still are entry points for pathogens and exit points for water, which are two important issues during storage.

In addition to the claim of eliminating bruises, Simplot says the Innate potato provides “protection against late blight pathogen,” and “reduced asparagine, which contributes to reduced acrylamide in cooked potatoes.” What are your reactions to these claims?

CR: The GM potato does contain a resistance gene that provides protection against late blight. The problem is that nobody knows how long the protection will last. Plant breeders have tested many different resistance genes in the past, and these genes are almost always overcome by quickly evolving pathogens.

Another issue is that late blight is usually accompanied by other pathogens. In humid regions of the world where late blight is most active, there are dozens of other pathogens. So, growing GM potatoes with a single resistance gene in, for example, Bangladesh is like getting vaccinated for one tropical disease and then moving to the tropics where there are many other diseases.

The title of your book is Pandora’s Potatoes. What led you to choose this title?

CR: During the five years after my departure from Simplot, I realized that I had not been rigorous enough in considering the possibility that my modifications might have caused unintended effects. I then studied the publicly available literature that was relevant to my past work, and identified a number of issues that had been hidden from my view. My GM potatoes had “hidden” issues—like Pandora’s Box.

What do you think should be done with these GMO potatoes?

CR: I believe that, for the short term, GM potatoes entering the consumer market should be evaluated for the incidence of hidden bruise and infections and the range in levels of toxins such as alpha-aminoadipate and tyramine.

Do you think the problems you experienced in GMO potatoes will be similar in other GMO plants?

CR: It is my experience that genetic engineers are biased and narrow-minded. They may not be able to critically assess their own creations.

What is your perspective on genetic engineering now after your work with the GMO potato and misgivings about it?

CR: My concern about genetic engineering is that the absence of unintentional effects can never be guaranteed. It may take dozens of years before these effects reveal themselves, and we should be extremely cautious applying the technology.

What is your perspective on CRISPR/gene editing?

CR: The problem with CRISPR is that it changes the function of a gene in all tissues of an organism. This is a very important limitation, because gene changes are mostly “useful” only if implemented in a single tissue.

CRISPR has the same problems as genetic engineering. In my book, I explain that it requires manipulations in tissue culture that cause mutations. These mutations have a negative effect on crop performance and cannot be removed from certain crops including apple and potato.

What do you see as the best alternatives to GMO or conventional mono-cropped potatoes?

CR: Genetic engineering is meant to increase crop uniformity. I believe the opposite approach—to increase crop diversity—will be more effective in increasing the sustainability of farming.

I am most hopeful in the efforts of small companies such as Solynta (A Dutch company that has developed an innovative non-GMO technology for targeted breeding of potatoes). The main benefit of Soylnta’s approach is that it breeds potatoes that have a simpler genetic structure than cultivated potatoes—more like that of wild potatoes—so that genetic traits can be combined much more effectively.