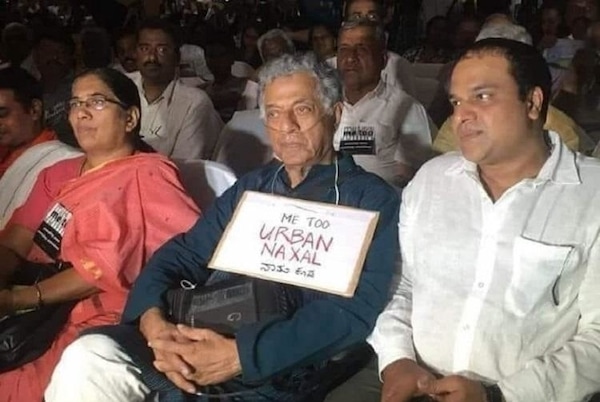 NARENDRA Modi said the other day, rather disparagingly, that the “Urban Naxals” live in air-conditioned comfort. Since all who speak or write in public upholding the right to dissent from the Hindutva positions, including even known critics of the Left, which means virtually all members of the intelligentsia who display any integrity, have been dubbed “Urban Naxals” by his government, his remark in effect amounts to targeting the entire intelligentsia.

His remark constitutes an utterly crude attempt to delegitimise any intellectual position that is unpalatable for the government, by suggesting that those who hold such positions live in comfort and hence should not be taken seriously by the people, i.e., the very fact of their living in comfort itself makes their arguments false as far as the people are concerned.

His statement is absurd for at least three reasons. First, most of the people arrested in the last few months as “Urban Naxals” have been civil rights activists working among tribal and other marginalised people and living with them under considerable hardship, as authentic activists of all descriptions including Left political activists generally do; their actual living conditions are thus far removed from Modi’s picture of air-conditioned comfort. Secondly, Modi himself and his friends in big business and media, whose pronouncements he would no doubt want people to take seriously as constituting the “truth”, do not exactly live in penury; indeed they live in greater air-conditioned comfort than anyone else in the country. (One of them even has a notorious high-rise residence in Mumbai entirely for himself). Thirdly and most pertinently, the validity or otherwise of an intellectual position has to be established intellectually, and not just by looking at the life-style of the person holding such a position. Indeed when the life-style of the person holding a particular position is invoked to negate that position, then we can be sure that underlying such invoking is an inability to confront it intellectually.

There is nothing surprising about why such right-wing groups do not have any intellectuals worth the name. Intellection requires asking questions, and a hallmark of all such groups committed to bigotry in one form or another, is that the members of the group are expected to swallow unquestioningly what is given to them from the top by the “leader”. This does not necessarily mean that they actually do not ask questions. Many of them of course do not, but others, one presumes, do; but those who do keep that fact carefully camouflaged, whether out of fear or out of mere opportunism or out of careerist considerations.

The upshot however is that intellectual activity within such groups takes the form of simply propagating a set of thoughts handed down, thoughts which are then commonly articulated by everyone in the group. It does not take the form of any independent engagement by its members with ideas or issues.

In situations where a right-wing movement comes up all of a sudden and rapidly springs to prominence, it may succeed in enlisting the support of some already established prominent intellectual, and thereby claim some intellectual pedigree; but even in such a case it is a question of the movement’s co-existence for convenience with some intellectuals and not of any intellectual activity within the movement itself. On the other hand, in old and well-established movements, like the Hindutva movement, the scope for even such arrangements of convenience scarcely exists. Since the ideas are handed down from the founder through the leaders who have followed, even claiming borrowed intellectual pedigree becomes too risky, lest it create confusion among the ranks owing to some lack of synchrony between the ideas of the intellectual “owned” for convenience and the handed-down ideas of the leaders.

Such movements therefore are intrinsically and essentially anti-intellectual, not just anti-Left but opposed to any form of independent intellection; and hence they are opposed to education per se, which by its very nature constitutes an activity that demands intellection in the quest for knowledge.

There is a fundamental difference here between the Left and the Right. The Left traditionally has been supportive of ideas in general, of the quest for knowledge in general. It has no doubt been supportive in this sense in the belief that within such an ambience Left-wing ideas will flourish because of their intellectual worth, but that is irrelevant. The point is that it has been supportive. Many Left activists in India for example have helped to build schools and colleges, not with the narrow objective of propagating Left ideas (in the way that the RSS uses schools to propagate RSS ideas), but for simply promoting thinking, for promoting a quest for knowledge in society. These institutions have not been Party institutions in any sense, or institutions controlled by the particular Party activists who founded them; on the contrary, those who founded them have tended to move on with their work, having planted this tiny seed for the society’s future.

The Right on the other hand has a totally different perspective, which is manifested in the fact that one of the most enduring legacies of the present BJP government, for which it will be long remembered, is the havoc it has wrought on the system of education, especially the system of higher education, in the country. This has not been a matter of ham-handedness of a particular minister; or of shoddy treatment meted out to a particular institution; or of simply one group of persons, associated with running educational institutions earlier in the pre-BJP period, being replaced by another group of persons acceptable to the BJP,who happen to be less able or less experienced or less academically-minded. The damage has been systematic, pervasive, and caused not by some sociological difference between one set of administrators and another, but by the structural fact that Hindutva bigotry cannot afford to stand any scrutiny of itself, and hence cannot stand any vibrant institution of higher education, since the very raison d etre of such an institution is to scrutinise everything.

But it is not enough that the tribe of intellectuals be victimised officially. If they command respect in society, then such victimisation can boomerang on the ruling Party by creating sympathy for them among the people. The victimisation of intellectuals must be accompanied therefore by a vilification of intellectuals, so that they lose their moral standing among the people. The people must be made to see them as “the other”. Epithets like “Urban Naxals”, “anti-national” elements, an immoral “English-speaking crowd”, a group wallowing in “air-conditioned luxury”, become essential for this purpose. Along with the Muslims, the dalits, the marginalised groups, the intellectuals too must be made aliens as far as the people are concerned.

This becomes particularly important in a society where intellectuals traditionally have been held in high esteem among the people, a legacy of our caste-based feudal past (even though the intellectuals of yore would have been a very different lot from the intellectuals of a post-colonial society who still bear the marks of being the product of an anti-colonial struggle). It is ironical that a Party like the BJP that upholds essential aspects of our feudal past like the caste-system (which is central to all orthodox Hinduism and therefore permeates the Hindutva project) should be striving so vigorously to destroy an important legacy of that past, namely the esteem for intellectuals or persons engaged in mental labour.

It is also not surprising that it is doing so by attributing to them “bourgeois vices” like living in air-conditioned comfort. The irony again, however, consists in the fact that this is being done by a government that claims as its most important plus-point its ability to usher in rapid“bourgeois” development, even to the extent of opening the economy to the unfettered operation of international capital. But this irony is inherent in the logic of contemporary neoliberal capitalism.