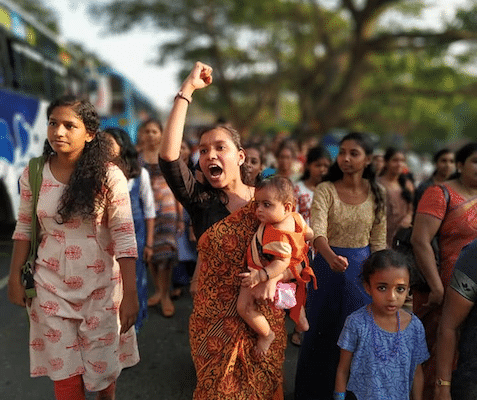 On 1 January, 5.5 million women formed a 620-kilometre wall across the length of the Indian state of Kerala (population 35 million). This was not like Donald Trump’s wall across the U.S.-Mexico border, a wall of inhumanity and toxicity. The wall of these women was a wall for freedom, a wall against traditions whose purpose is to humiliate.

The immediate reason for the women’s wall was a fight over entry for women into the Sabrimala temple in southern Kerala. On 28 September 2018, the Supreme Court of India ruled that women must be allowed to enter the temple since the selective ban on women was not an ‘essential part’ of Hinduism but instead was a form of ‘religious patriarchy’.

The Left Democratic Front government in Kerala embraced the judgment and fought off a challenge on the streets from the right-wing reactionary groups–including the ruling party in India, the Bharatiya Janata Party (BJP). In October, the Chief Minister of Kerala–Pinarayi Vijayan, a leader of the Communist Party of India (Marxist)–gave an important speech in defence of the breaking of customs. If a tradition is a shackle, it must be broken. Vijayan gave the call for this wall to be built by women on 1 January. People from across the state responded with enthusiasm. A hundred public meetings were held in the last months of 2018 to galvanise support; 175 progressive organisations joined the campaign. At 4pm, the women stood firm. They took an oath to fight for women’s emancipation and to conserve the values of Kerala’s renaissance traditions.

Coming up next week from Tricontinental: Institute for Social Research will be our 12th dossier, which is an interview with Brinda Karat about the Indian general elections that will take place in 2019 and on the challenges before the Indian Left. Please keep an eye out for it. ‘The message of the Woman’s Wall’, Karat said, ‘has a resonance far beyond the boundaries of Kerala’. Kerala gives us a look at how to live and struggle in these turbulent times.

The photograph above was taken by Sivaprasad Parinhattummuri. The central figure in the picture is Athira, a leader in Kerala’s left. She is currently the Malappuram District Committee member of the Democratic Youth Federation of India. She was a former Kerala State Committee member of the Student Federation of India. Athira had been imprisoned for her participation in a student struggle at Calicut University. She holds her six-month-old daughter Duliya Malhar.

Emboldened by the Wall, two women–Bindu Ammini (a lawyer who teaches at Kannur University) and Kanakadurga (who works for the Kerala Civil Supplies Corporation)–walked into the Sabrimala temple. History is on their side. 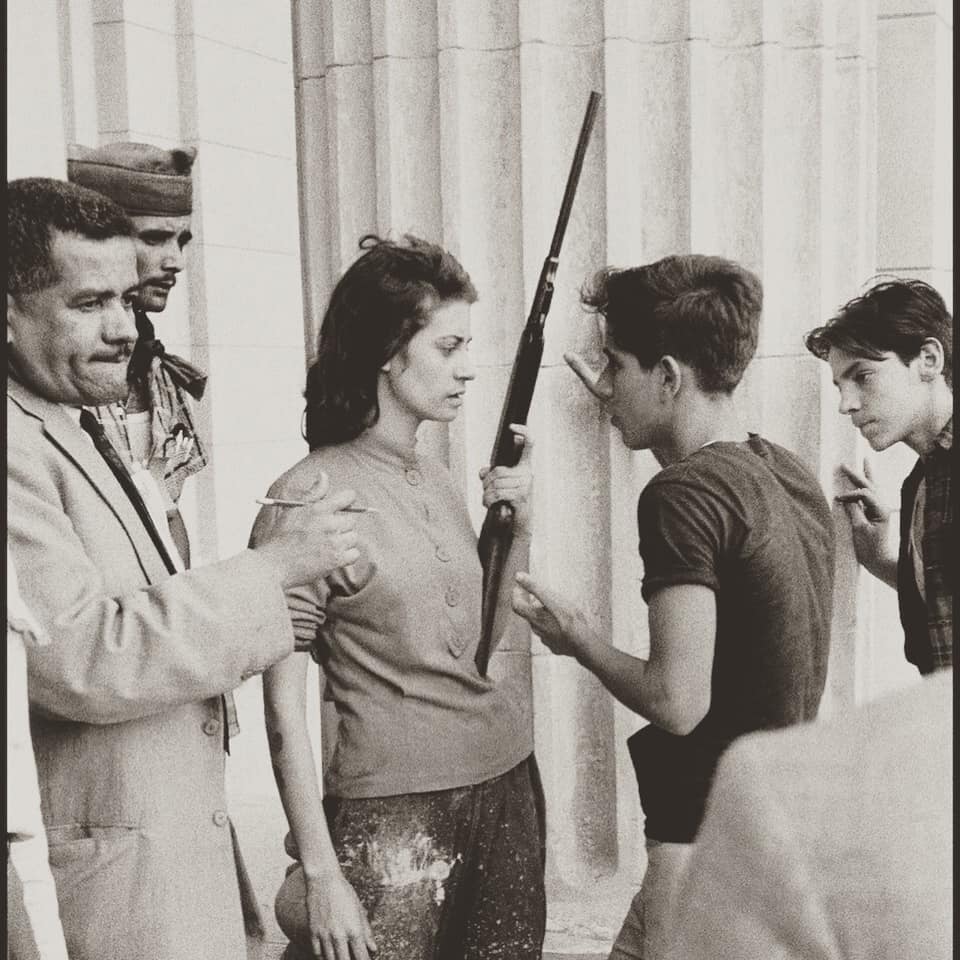 ‘They turned Cuba into a gambling den’, sang the poet Carlos Puebla, ‘and then Fidel arrived’. As the women in Kerala gathered to form their wall, the people of Cuba celebrated the sixtieth anniversary of their revolution. Over these sixty years, Cuba has faced an economic war from the United States and from the oligarchies of Latin America. The revolutionary government and its highly militant population have struggled to stave off invasion and assassination as well as economic strangulation. Not a day has gone by when the Cubans could rest easy: the overthrown dictator ran off with Cuba’s money, the U.S. government began its policy of destabilisation, the old colonial sugarcane plantation system had been starved of investment and the island had become–as Puebla sang–a den for gamblers. Help from the USSR could not overcome the penalties of a long history of colonial slavery and of imperial domination.

When the USSR collapsed in 1991, Cuba lost an essential pillar of support. It went into a Special Period and spluttered through the past twenty-five years as it protected itself from U.S. threats and from the entanglements of globalisation. Twenty years ago, in 1999, Fidel Castro spoke of the dangers of the ‘gigantic casino’, with finance unleashed to overwhelm the needs of humans. Money is lent to make money, but not to cure disease or to house the homeless. There is no protection from greed, only one of the many human emotions. Castro described the imperialism of high finance as ‘wolves, grouped in packs and aided by computer programmes’. These wolves, he said, ‘know where to attack, when to attack and who to attack’. They want to turn Cuba into a gambling den again.

Today, Cuba’s revolution is in grave danger (as I report in my column). U.S. President Donald Trump has fixed the garrotte around its neck and threatened to pull harder and harder. Finance has turned its back on Cuba, which watches its ally Venezuela flounder under the same pressures (please see our Tricontinental: Institute for Social Research dossier on the situation in Venezuela). There is no ‘market’ that decides by magic to target Cuba and Venezuela. They are facing a political attack, a warfare of Money, the tightening rope, the struggle for air. 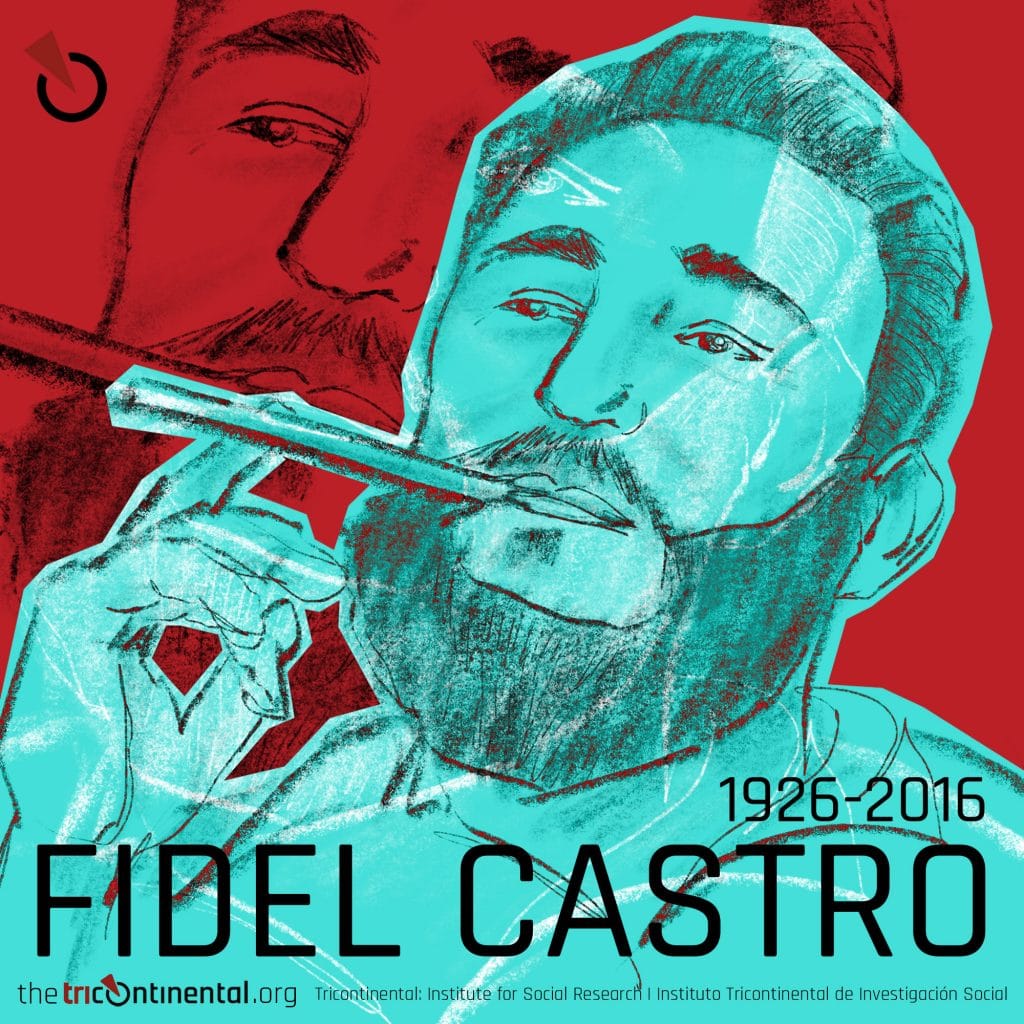 To honour the 60th anniversary of the Cuban Revolution, Tings Chak–the lead designer for Tricontinental: Institute for Social Research–has written a fabulous article on the cultural efflorescence that erupted after the revolution in 1959. Seven years later, in 1966, the Cuban government hosted the Tricontinental Conference–a landmark event in the anti-colonial and socialist movement. Out of this event grew the Organisation of Solidarity with the Peoples of Asia, Africa and Latin America (OSPAAAL), which is based in Havana (Cuba). OSPAAAL publishes the Tricontinental journal, whose artwork inspired a generation towards revolutionary causes. Tings, for our institute, works in the tradition set by the team led by Alfredo Rostgaard. We are proud to be in that lineage.

Above, please see her homage to Fidel Castro–part of Tings’ superb series on revolutionaries. 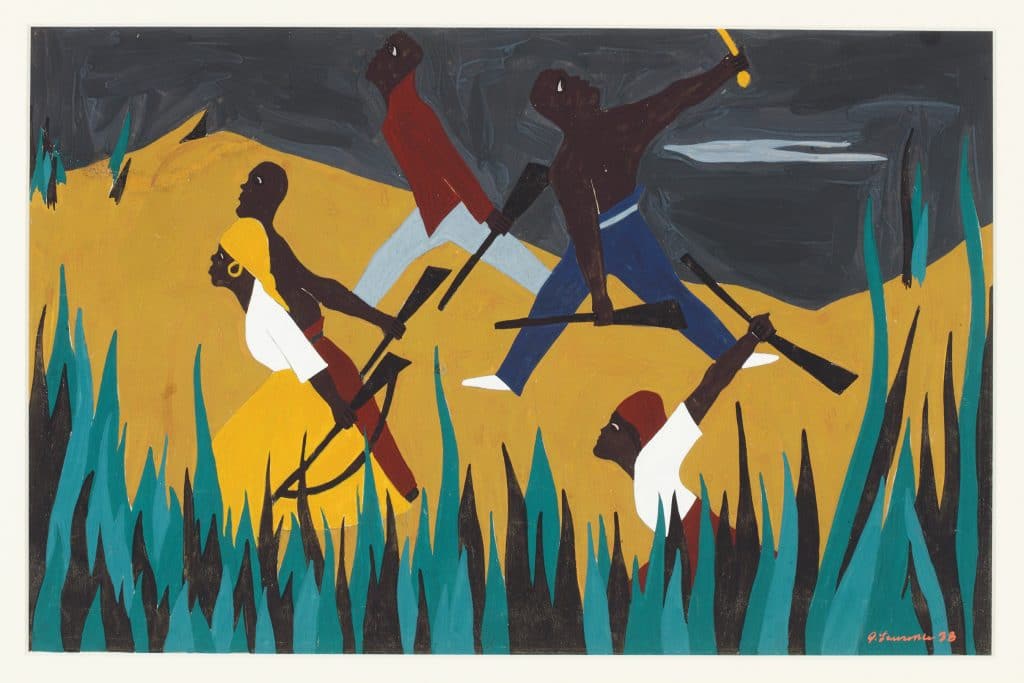 From South Africa, Richard Pithouse–editor of New Frame and part of our Tricontinental: Institute for Social Research team–writes a thoughtful essay on the dialectic opened up by the end of the Cold War. Liberalism provided the elites of globalisation with their vocabulary, while the policy space cannibalised society and impoverished hundreds of millions of people. The ruling elites toyed with the neo-fascists as a means to attack the emergent people’s movements.

Brazil, in our times, is a case in point. On 1 January, the far right’s Jair Bolsonaro was sworn in as president of Brazil. He is the product of a scorched earth strategy against the left by the dominant classes. Their antipathy to the left and to people’s movements delivered Brazil into the hands of Bolsonaro.

Richard points towards Haiti, which on 1 January 1804 defeated slavery and became the first anti-colonial republic in the world. The French declared a blockade of Haiti, which lasted twenty years. Eventually, Haiti agreed to pay France ‘compensation’ for the end of slavery. Haiti went to French banks for this money, which–by the time of the Cuban Revolution of 1959–amounted to U.S.$17 billion. Haiti was never able to break free of the shackles of debt. No liberal agenda governed the reaction to Haiti (on the current situation in Haiti, please see our Tricontinental: Institute for Social Research dossier).

It is worth pointing out that the U.S.-led blockade of Cuba has cost the island at least U.S.$1.1 trillion. Neither the Haitian Revolution (1804) nor the Cuban Revolution (1959) have been allowed to thrive. Their backbone had to be broken. But neither country has collapsed into silence. The Haitian and Cuban people continue to defend their dignity. 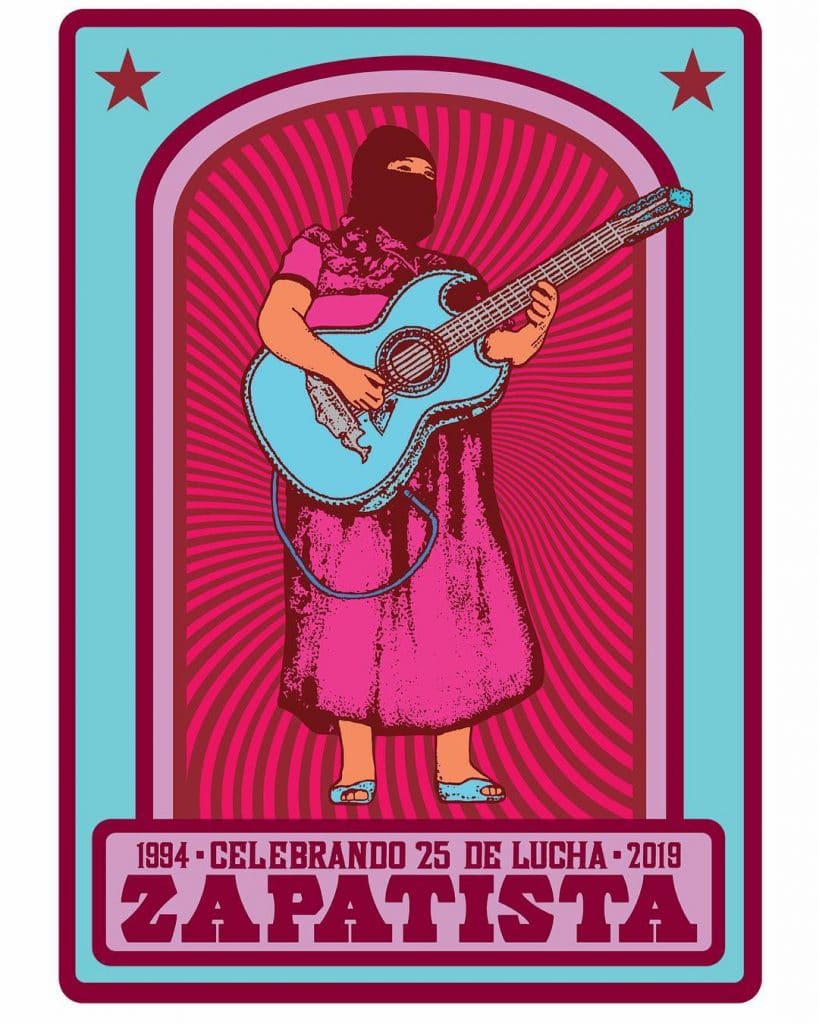 Poster designed by Jesus Barraza of Dignidad Rebelde, based on a photograph by Kristen Flores

The title for this newsletter comes from a statement released by Subcomandante Marcos of the Zapatista Army of National Liberation (EZLN). Marcos made this statement when the EZLN began its insurrection in Chiapas (Mexico) twenty-five years ago. Everything seemed lost in 1994. The USSR had vanished, China had entered its reform era, Cuba was in its Special Period, the World Trade Organisation and the World Economic Forum at Davos seemed to run the planet and news began to filter in about the Rwandan genocide. Then, out of nowhere, on 1 January 1994, the Zapatistas seized a series of towns in Chiapas and declared that the forces of freedom remained alive and well. Marcos released communiques that offered a new vision of the future. ‘But today we say–Enough is Enough’, ¡ya basta!, as the first communiqué from the Lacandon Jungle put it.

A quarter of a century later, we repeat ¡ya basta!

So does the EZLN, which has welcomed the presidency of Andres Manuel López Obrador but which warns him not to continue the policies of theft from indigenous lands and destruction of the earth. Comandante Everilda of the EZLN has a strong message for us. She says, ‘We will not allow any project that destroys the life of humanity and the death of our mother earth–because behind these projects are the interests of national and transnational capitalists’. Not the people. ¡ya basta!

PS: Please visit our website to read our newsletters from last year, our dossiers, our working document, our notebooks. The covers are below……

Images from the world of the Tricontinental- Institute for Social Research.