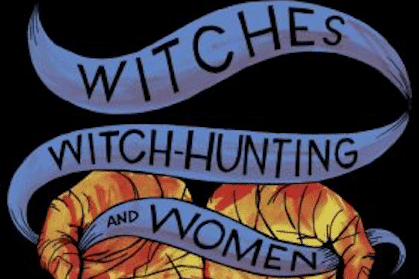 In the West, the witch is regarded as a fictional figure of fun, the bloody reality of witch-hunting in our past and present whitewashed from the public consciousness. In a cruel twist, fancy dress shops purvey sexy witch outfits to be trotted out on Halloween. The TV show Sabrina The Teenage Witch has recently been revived on Netflix, featuring a cute young blonde with magical powers. The sexualisation of witches for commercial purposes enrages Silvia Federici, who notes that the political class and religious institutions that colluded in the witch-hunts of the early modern era have never acknowledged, or indeed apologised for, the mass murder of women that took place.

Exact numbers are vague, but it is estimated that tens of thousands of women were killed as a result of accusations of witchcraft in Western Europe and North America. As Federici states, ‘No “Day of Memory” has been introduced in any European calendar to remind us of the massacres of the witches.’ It’s a poignant introduction to the collection of essays in Witches, Witch-Hunting and Women. Divided into two sections, the first part of the collection sees Federici re-visit themes from her 2004 book Caliban and the Witch, in which she addresses the causes and outcomes of the European witch-hunts. The central question she seeks to address is why this deeply misogynistic practice took hold at a time when modern ideas of science, economics and the bourgeois class were in the ascendency. Feminists and historians have pointed to the decline of magic, and the fear of women’s reproductive power in the Enlightenment period, as a key to the understanding the widespread persecution of women as witches–rational science bumping up with and asserting itself over the old world, by containing women’s messy, irrational bodies and destroying traditional knowledge of childbirth and healing practices.

Deviant behaviour was increasingly linked with animality in the modern period. Where once anthropomorphism played a role in folklore, the link between man and animal world was broken and animals lost their status as sentient beings, valued only for their use value to humans. The cat prevalent in imagery of witches was one of many creatures that appear in evidence at witch trials–these ‘familiars’ were deemed to be under the control of the witch, assisting her in her evil deeds.

But in analysing the break from the natural world, Federici goes further, pointing to the impact of early capitalism and the ‘enclosure’ land policies that were enforced on the English countryside during the sixteenth and seventeenth centuries, when the witch-hunts peaked. The transformation of agrarian economies, notably the privatisation of lands formerly regarded as ‘common’, led to poverty and created social divisions not previously experienced by rural communities. In this environment, it is easy to imagine how neighbour could suddenly accuse neighbour of spoiling their milk, harming their livestock or cursing their crops. It was particularly women–the widowed, friendless, socially outcast, all those deemed no longer productive–who presented a potential threat to the new socio-economic order and found themselves accused of witchcraft.

The second section of the collection is more complex, addressing what Federici describes as the escalation of witch-hunting in various regions around the world, coupled with extreme violence directed at women where processes of globalisation are underway. Drawing on evidence from countries as diverse as Tanzania, where it is estimated up to five thousand women accused of witchcraft are murdered a year; areas of India that are witnessing a rise in instances of witch-hunting; and parts of Latin America experiencing frighteningly high statistics of femicide.

Federici argues that the conditions that make this possible are similar to those experienced in early modern Europe. In traditional communities subject to globalisation and the enforcement of free-market policies, local economies are undermined, creating unstable social networks that result in the position of women and the elderly becoming tenuous. The younger population in countries undergoing economic transformation find themselves competing for land and resources and see an easy scapegoat in social groups that were once revered centres of power but are now sidelined and surplus to requirements. At the same time, institutions like the World Bank pressure governments and communities to move away from subsistence farming, forcing women to become unpaid domestic helpers, subservient to the main male wage earner. The result is that women are disempowered, and capitalist modes of production and labour reinforce patriarchal structures.

Many of the assertions about the rise of witch-hunting are supported by evidence from sociologists and field workers on the ground. However, the data is somewhat sporadic, covering vast continents and affecting communities with limited access to support services. Added to this, while applying a Marxist analysis to the rise of hate crimes against women, Federici leaves little room for distinctions between the murder and torture of women in Ciudad Juarez, Mexico, and cases of witch-hunting in Tanzania, though this is more due to a lack of space and time given to each case than a failure of ideas. This is a timely collection and one that warrants greater exploration from modern feminists, and, as she admits in the introduction, from Federici herself.

We do not need to look far to find contemporary examples of witch-trials and the devastating impact to those who are accused. A recent case of apostasy in Pakistan drew international attention when religious groups took to the streets demanding the reinstatement of the death sentence handed down to Aasiya Noreen in 2009. Noreen was freed this year after the evidence from her accusers was deemed unsafe. A Christian of low caste in a predominantly Muslim country, her co-workers accused her of blaspheming the Prophet Muhammad after a row ensued when they refused to share water from a cup she had drunk from while out harvesting fruit. She is currently prevented from leaving the country to seek asylum and her future is uncertain.

The low social status of the accused is a common denominator in instances of witchcraft, of which apostasy is a close relation. Currently 13 countries impose the death penalty for apostasy. It is a crime that draws on primal fears yet serves as an all too easy way for the ruling class to assert power over troublesome elements in society, or remove rivals for land or resources within communities.

In cases of witchcraft the punishment is public and frequently brutal, and are often preceded by a witch trial and public shaming. In the U.S., an attack on the credibility of Supreme Court nominee Brett Kavanaugh this year resulted in Christine Blasey Ford, who accused him of sexually assaulting her at college, providing a live testimonial of the events in a courtroom, broadcast live to a global audience. In these extraordinary scenes, an all-male panel interrogated Ford via a female adjudicator. In an extremely public arena, Kavanaugh was cast as the good patriarch, a male representing justice and the institution of the family. He was pitted against the either-lying-or-manipulated Ford, a tool of the dark forces of liberal-minded Democrat Party conspirators. Even Ford’s impeccable reputation and high social status could not prevent her being openly mocked by President Donald Trump, and following a deluge of death threats she went into hiding, fearing for her life. In modern-day America women and celebrities marched against the President and his supporters in support of Blasey, but the public vitriol levelled against a woman for speaking to power has echoes of the scold’s-bridal.

Against this backdrop, Federici’s attempt to draw together the work of feminists and activist from different parts of the world and place them in historical context is brave, thought-provoking and timely. Federici’s writing is lucid and her fury palpable. Let us hope the follow up is as good as Caliban and the Witch. It is just a shame that there is a need for books like these at all.

Witches, Witch-Hunting and Women is published by PM Press.