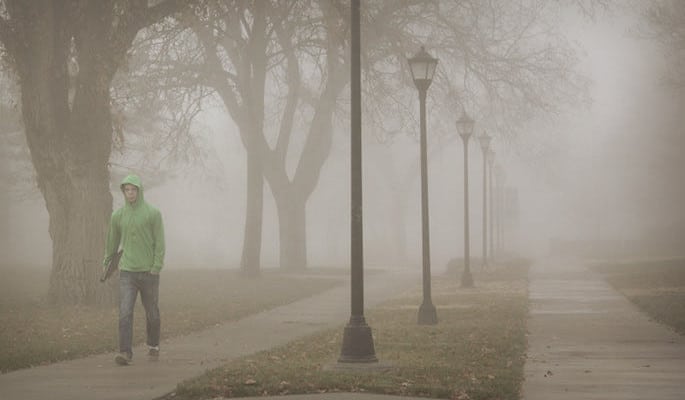 3 May 1968, George Marchais, one of the leaders of the French Communist Party (PCF), took to the party daily L’Humanité to condemn the ‘pseudo-revolutionaries’ who were about to kick-start the largest general strike in European history. These students, Marchais warned, were but ‘the sons of the high-bourgeoise… looking to give lessons to the working class’. They would ‘quickly put their revolutionary flame on the back burner to go and run daddy’s businesses and exploit the workers in the best traditions of capitalism’. Daniel Cohn-Bendit, the charismatic ‘German anarchist’ poster-boy of the French May, was a particular focus of Marchais’ ire. By twist of fate or foresight, this same Cohn-Bendit is currently a close confidant of France’s answer to Margaret Thatcher, Emmanuel Macron, as he liberalises France’s economy.

Marchais’ cynicism may have foreseen that many a leading soixante-huitard would put ‘their revolutionary flame on the back-burner’ in their long march to the halls of power. But this in no way diminishes the PCF’s ‘great misunderstanding’ of 1968, in the words of French historian and former leading PCF figure Roger Martelli. Failing to see that the student and then workers’ movement marked the start of a new political phase that defied the rules of the past, the Communist Party failed to reform its habitual strategies alongside the political subjectivities of new generations of workers (and future workers in the students) formed by the new social and cultural post-war reality. Although weathering the ‘May events’ and seemingly growing in size and influence through the 1970s, the party was to become more and more out of sync with the generation that made 1968. By the early 1980s it was clear it was in irreversible decline.

This episode in the history of the French left is no piece of ephemera. It encapsulates one of the pressing political questions for the left in Britain today: how does a left party successfully integrate radicalising generations of young workers and future workers into its political project? Today, as in 1968, capitalism has socially reproduced a new generation whose interests and everyday experience stand in contradiction to the reproduction of the system itself–leaving many establishment figures baffled by its consequences.

In timing painfully similar to that of Marchais, Guardian journalist Polly Toynbee wrote five days before the demonstration that started the most important youth movement in Britain for decades that the students were ‘quite low in that pecking order of pain’. She argued in November 2010 that ‘there is a limit to how many protests can be heard as jobs, valued services and the whole public realm comes under mortal assault, the effects felt worst by those who make least noise’. In both cases, appeals to a real or imagined working class–more deserving or more class-conscious than the students–acted like a discursive point of order to shut down the challenge posed by the new social forces brought forth by capitalist development. The new youthful social subjects didn’t fit the assumed rules of the political game, nor did they warrant any further social analysis.

A critical eye to the student body today calls into question the assumptions of Marchais and Toynbee that students are in some way a privileged sector of society who should support that which they are not: the working class and the unprivileged. One major change is in their size and social composition. According to national statistics, between 1992 and 2018 the proportion of people aged 16-24 years in full-time education increased from 26.2 to 43.9 per cent. At the same time, government changes to the organisation, funding and overall function of education have fundamentally transformed the position of the student in the class structure of British society.

The abolition of maintenance grants and introduction of loans that barely cover living costs has eroded college and university education as a discrete social stage between adolescence and wage labour. The cut in the student wage (grants) has driven eight out of 10 students to take up part-time work (up from 57 per cent in 2013)–often in the poorly paid service sector–according to one survey. The identity of the student as a student has been slowly degraded as a result.

Instead of using their time to further their studies, socialise, make art or organise politically, nine out of ten of those students in work do so for at least 20 hours a week, earning an average of £412 a month. The survey of over 4,600 students, conducted by the Endsleigh insurance company, showed that this money is used to support rising accommodation costs, food, transport, books and basic necessities, topping up other sources of funding from parents, overdrafts, and student loans. Nearly 90 per cent also said that taking on work while studying was necessary to get a job afterwards in a labour market glutted with degree-holders. Higher education is no longer a key into the professional classes but could also mean decades of dead-end service jobs. Instead of the student-qua-student, we are seeing the growth of the student-worker.

The debt relation between students and their studies has transformed the class character of the student condition. This compounds the proliferation of consumer credit over the past 30 years as workers have sought to make up the shortfall from stagnant wages. As the Midnight Notes collective have noted, neoliberalism has ‘paradoxically… thrown open a new dimension of struggle between capital and the working class within the domain of credit’. Nowhere is the effect of financialisation more acute than in the changes to student debt.

According to the government’s own figures, published in a parliamentary report in July 2018, £2.5 billion was added to the accrued interest repayment debt on UK student loans in just one year in 2017-2018. Many new starters at university are paying up to 6 per cent interest on debts over £50,000. This year was the first in which accrued interest has overtaken the amount repaid. For students who took out loans before 2012, these repayments are no longer going back to the government or the state-owned Student Loans Company, but to banks and hedge funds like Barclays, Credit Suisse, Lloyds and JP Morgan, who have bought the debt. Students are now paying the richest banks in the world for their right to an education, handing them huge dividends in the process.

The myth of the student as someone who exists either autonomous from the class structure or parasitic on wealth produced by others is outdated and dangerous. Financialisation has drawn students into the disciplinary rigour of the capitalist economy. Increasingly it is students who incur the costs of developing themselves as the skilled and educated workers that capital depends on for sustainable growth.

Students in the 1970s defended student grants as a just ‘student wage’: students were future workers, they reasoned, and they would contribute to society as more productive citizens when they graduated. The elimination of grants has killed off this argument and placed a double burden of waged and unwaged labour squarely on the modern student’s shoulders. With this multitude of pressures, it is no surprise that universities are experiencing a mental health crisis. These vast changes to education tell us that just as the student movement of 1968 was unimaginable in the student population of 1918, so too a re-run of 1968 seems impossible in the class of 2018. The latter’s revolt is taking a different form.

The class position of students has changed as their everyday social reproduction has been commodified. Hugely profitable new markets have emerged, especially in housing. According to Knight Frank estate agents, in 2015 there were £5.1 billion worth of transactions involving nearly 50,000 student rooms. As of 2016, there were 525,000 ‘purpose-built student accommodation’ bedrooms in the UK, with 134,000 more in the pipeline. The great majority of this growth is found in privately run and administered blocks rather than university-owned halls.

As the FT notes, this process is driven as ‘global institutions, private equity and real estate investment trusts look for safe, stable places to put their money’. In 2016, for example, Mapletree Investments, the property arm of Singapore’s state investment fund Temasek, fought off bidders from the US, Russia and the Middle East to build a £417 million portfolio of 25 student residences with 5,000 bedrooms. The marketisation of universities and privatisation of the students’ social reproduction has broken the walls separating the university as an academically oriented space that is partially autonomous from the demands of capital. From setting foot on campus to taking a loan to finding place to live, students today cannot escape their forcible integration into international capital’s search for investment returns in an increasingly volatile market.

Understanding how the British working class has been restructured under neoliberalism means directly confronting the question of generations. The failure of capitalism and political elites to reproduce, integrate and satisfy the expectations of new generations of workers inside the neoliberal model is the system’s ‘weak link’. The greatest threat to Britain’s financialised capitalism resides in the new social sectors of young ‘student-workers’ who have been increasingly pushed to the left as the uneven effects of capitalist crisis increasingly impinge on them. Their early entry into wage labour and the forcible imposition of debt (without any corresponding offer of assets) has transformed the student body into something unrecognisable from 50 years ago.

Students are more likely now to experience a life of debt and increasingly precarious employment than go on to run ‘daddy’s business’, in the words of George Marchais. With little to gain from (or assets to defend within) the existing system, these new radicalising social subjects are crucial sources for hope. Any future socialist project will need to act as their tribune.