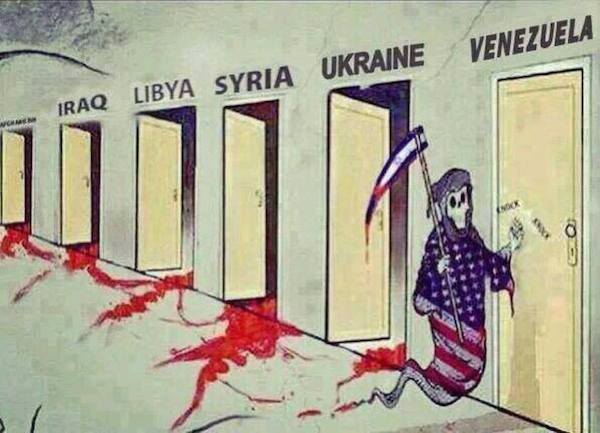 War laboratories in the United States have succeeded in applying pre-designed aggression formats against countries that do not align with their imperial policies. These obviously adapt to cultural, religious, social, historical and even geographical features.

In 2011, Syria began to suffer a brutal aggression by imperial powers, which continues today, but from which it has emerged practically victorious at a very high cost.

At the moment, Venezuela is preparing the stage for an aggression similar to the one experienced by Syria, which in spite of punctual and marked differences, are essentially structured in a similar way.

Infiltration of terrorist and mercenary groups

In Syria, the infiltration of terrorist and mercenary groups took time, but their actions were sudden and simultaneous. If we go back to April 2011, it is worth remembering Nidal Jannoud who is said to have been the first victim of the conflict.

He was a farmer and guard of an officers’ club in Banias, on the Mediterranean coast. He was intercepted on the way to the market and massacred. His only crime was to be an Alawite (a branch of Shiite Islam practiced by Syrian President Bashar Al-Assad).

In Venezuela this type of groups have acted for years, carrying out punctual attacks to systems of electrical distribution, deposits of food and medicines, burning of public and private property. On January 10 of this year, they provoked a voracious fire in IVSS sheds on the Guarenas-Guatire highway where medical equipment and supplies valued in millions of dollars were stored.

Attacks on electrical installations are constant, the most recent being those that occurred last February 4 in the states of Anzoátegui and Miranda. Terrorist attacks have not only been limited to property, but also against human life. Dozens of peasant leaders, and political and public figures sympathetic to the Revolution, of medium and high levels, have been assassinated, the most emblematic case being that of Robert Serra.

Betrayal of politicians and the military

In Syria, foreign intelligence services succeeded in penetrating the political and military strata, although with limited and not strategic scope. They created the “Syrian National Council”, whose headquarters were in Turkey, as well as an appendix to it, the “Syrian Free Army”, composed of military traitors. They also offered large sums of money to Syrian ambassadors in strategic countries in exchange for betraying Al-Assad.

In Venezuela, the dissidence of politicians of certain relevance has basically taken place because they are linked to cases of corruption, victims of blackmail by the opposition or because they feel cornered. With respect to the military aspect, betrayals in general include soldiers without troop command. One stands out despite the fact that little is said about it, that of Major General Hebert García Plaza.

He was discovered to be corrupt in the public administration and is seeking asylum in the United States. He was director of armament of the Bolivarian National Armed Force (FANB) during the purchase of the bulk of modern war material during the administration of Commander Chavez. It undoubtedly provided vital information on the type and quantity of weaponry acquired, as well as its location and storage.

In recent days we have seen the consul in Miami and the ambassador in Iraq square off with the coup. It is worth noting that Jonathan Velasco, now former ambassador to Iraq, was accused by the right wing of handing out Venezuelan passports to groups they consider (as well as the United States and Israel) as terrorists.

Intense propaganda in the international media

As happened with Bashar Al-Assad in 2011 and subsequent years, Maduro is the victim of a ruthless international media campaign that has tried to demonize him, all of this in order to justify to foreign public opinion any action against Venezuela outside the framework of legality.

The United States and the European Union (EU) have sanctioned dozens of Syrian individuals and entities for “providing military equipment or support to Syria to suppress protests. Oil embargo, ban on certain investments, freezing of assets of the Central Bank of Syria within the United States and the EU, as well as restrictions on the supply of equipment and technology. Even against Russian individuals and entities for supplying oil to Syria.

At first it resulted in a strong blow to the nation, taking into account that almost all of our weapons systems were manufactured in the West, but our good economic situation allowed us to look for new military markets in sovereign countries, obtaining high-tech equipment and supplies.

The measure taken by the United States at the time led them to lose a modest but valuable market for their military-industrial complex. As against Syria, until basically 2018, the sanctions were directed against political personalities, military and private businessmen linked to the government.

This year 2019, the United States and some European countries are all at stake by going further. With the appropriation of Citgo, Trump’s government retains 7 billion dollars in assets and 11 billion dollars in oil exports for this year.

Citgo currently has three refineries in the United States, 48 storage and distribution terminals with some 6,000 service stations.

It has the capacity to process 749,000 barrels of crude a day, making it the sixth company in the sector in the United States. The measures announced by Washington could translate into an oil embargo that is not openly declared, but that is rigorously executed against the country’s oil assets.

Likewise, the financial service provider Euroclear keeps 1,650 million dollars frozen for the purchase of medicines and food for the Venezuelan population, with the EU participating in the financial blockade against the country.

Likewise, the Bank of England refuses to deliver 14 tons of gold, valued at 550 million dollars, using incredibly ridiculous excuses. It is worth pointing out that the set of sanctions has been promoted and requested by traitors of the opposition, with Deputy Julio Borges at the head.

Syria is the “cornerstone” of the Middle East region, which is why it plays a leading role in the geopolitics of the area. It borders the terrorist state of Israel, Jordan, Iraq, Turkey and Lebanon.

The criminal, retrograde and vassal dictatorships of Saudi Arabia, Qatar and Jordan need to “buy” their permanence in power from the United States and Israel. Saudi Arabia and Qatar are the ones that contribute most of the petrodollars that finance the aggression against Syria.

As for Venezuela’s neighbors, Colombia and Brazil have the baton regarding the desire to become territorial bridges for an eventual aggression against the country. Brazilian President Jair Bolsonaro declared that his military forces could play the same role in Venezuela as they did in Haiti. Together with Colombia, they offer themselves as “collection centers” for the reception of “humanitarian aid”.

To pretend to introduce to Venezuela the supposed “humanitarian aid” would imply that our military forces would have to allow the violation of the sacred soil of the homeland. Colombia and Brazil intend to assume the role that Turkey has had in northern Syria. We must not forget the so-called “Specific Exercise Balboa Operational Planning” of which Colombia was a part.

Course on the Joint Chiefs of Staff of the Spanish Armed Forces in May 2001. He proposed the “Balkanization” of Venezuela by dividing it. For many years the right wing has promoted plans for the secession of Zulia, from which the old aspiration of the Colombian oligarchy is not exempt.

This plan considered it feasible that, in a “humanitarian” intervention, Colombia would reserve the “protection” of Zulia, Táchira, Mérida, Trujillo, Apure, the rest of the western states and the joint “protection” with Washington of the Amuay refinery. For its part, the United States reserves the East, from Margarita to Guayana, oil production, the domination of the mouths of the Orinoco and a dominant look towards the Atlantic.

In November 2011, the Arab League expelled Syria, becoming a shameful organization at the service of imperialism and Zionism. Venezuela is under siege by the Organization of American States (OAS), becoming under the leadership of Luis Almagro the spearhead of regional “diplomacy” for the destruction of the Bolivarian Revolution.

The “Grupo (or Cartel) de Lima” is another regional instance that gathers the right-wing leaders of the continent and that were grouped with only one objective: to actively collaborate in the overthrow of Nicolás Maduro by mandate of the United States.

It is time for definitions. Never before has the Bolivarian Revolution been so threatened. The vassal opposition would be nothing without the international pressure of which we are victims. A psychological war is looming over our nation with a view to weakening the loyalty of the revolutionary people, but the days pass and the people remain in stoic resistance.

This leads to two alternatives for the opposition; the first and most convenient is to retake democratic channels and sit down to dialogue, and the second is to continue preparing the ground for an eventual foreign military aggression as the only alternative for the seizure of power.