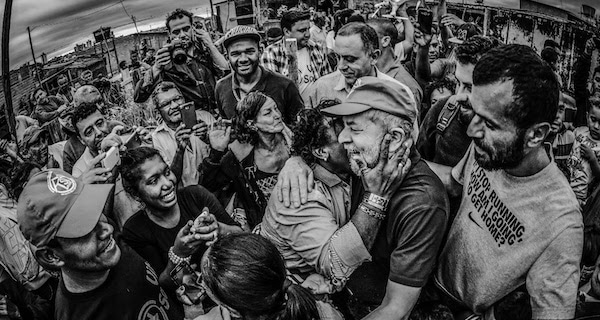 You will open this newsletter and read it just a few days before Luiz Inácio Lula da Silva will wake up in the Federal police headquarters in Curitiba (Brazil) on 7 April, the one-year anniversary of his incarceration. You will go ahead with your day, perhaps reading bits and pieces of this newsletter or saving it to read later. Lula will likely eat what he ate on his first day in prison: bread and butter with his coffee. He will know that across the planet there will be demonstrations in his name. ‘Lula Livre’ (Free Lula) the people will cry out. You’re not alone, they will say, você não está sozinho. It will give him hope.

A few weeks ago, Lula had sent a ‘letter to militants’, in which he talked of being ‘unfairly imprisoned’. To his jail cell, Lula had taken the sociologist Jessé De Souza’s A Elite do Atraso: de Escravidão à Lava Jato (The Decayed Elite – from Slavery to Operation Car Wash). What sent Lula to prison was Operation Car Wash, an investigation into corruption amongst the political class in Brazil which has swallowed up many politicians (you can read more about this in our fifth dossier, Lula and The Battle for Democracy).

The most recent politician to go is former president Michel Temer (president from 2016 to 2018), who took up the mantle for the oligarchy against Lula (president from 2003 to 2010) and his successor Dilma Rousseff (president from 2011 to 2016). Temer was alleged to be at the centre of a crime ring that received $470 million in bribes. The scale of his corruption is epic. Lula was accused of taking bribes to the tune of $800,000 – the evidence based on a man who pointed a finger at Lula in order to reduce his own jail time. Neither the scale of the crime nor the evidence offered confidence in the Brazilian judicial system. No wonder that 464 members of Brazil’s legal profession signed a letter last month against the false nature of the evidence and judicial process in the case against Lula. As I write in my column this week, Judge Sergio Moro prosecuted Lula as if he were the most corrupt man on the planet. Moro has now joined the cabinet of the government of President Jair Bolsonaro. The quid-pro-quo corruption of a judge who makes a presidential win possible by eliminating Lula from the race taking a job in the new president’s cabinet has not raised enough eyebrows. 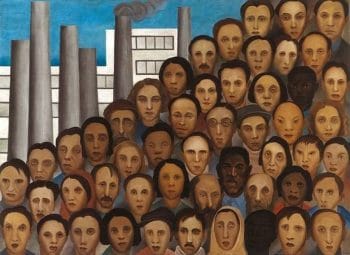 Lula has already been in prison for a year. Temer was released in four days.

De Souza’s book suggests that Brazil’s long history of slavery (from 1532 to 1888) dug deep wedges of hideous racism and oligarchic privilege into Brazil’s culture. Not only did the oligarchs despise Lula for his class background (he went from street vendor to auto factory worker), but they hated him for his fealty to Afro-Brazilians and to indigenous communities. Lula’s government had to fight against five hundred years of sedimented class and race hatred, pickled in resentment at women’s equality and in social justice. They fought hunger with as much desperation as they fought racial inequality as they fought misogyny and transphobia.

De Souza argues that the ‘decayed elite’ had to get its revenge, which it got through two processes. First, by a ‘legislative coup’, the deeply flawed impeachment of Dilma in 2016. Second, by a ‘judicial coup’, the use of the Car Wash investigation to remove Lula from the presidential ballot of 2018 (when he was the front-runner). It mattered so little that this ‘decayed elite’ delivered the country to a man with a fascistic mindset – Bolsonaro. Bolsonaro had cast his vote against Dilma in the ‘legislative coup’ of 2016 by honouring her torturer, Colonel Carlos Alberto Brilhante Ustra (who had died the previous year). The repulsion of seeing Bolsonaro make nasty, sexist comments against Dilma, then honour a man who had been such a key part of Brazil’s terrible and long military dictatorship, should have set at least one section of the wealthy on edge. But they had no liberal tradition underneath them, having the decaying ideology of an old slave-owning class as their window into the world. 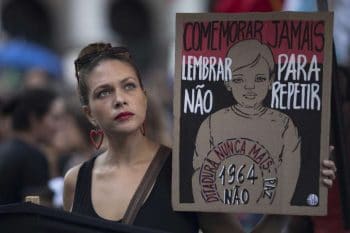 A week before Lula’s first anniversary in prison, Brazil had to go through the trauma of the 55th anniversary of the ‘day that lasted 21 years’. Bolsonaro, who had honoured Dilma’s torturer, suggested that this anniversary of the military coup be celebrated not reviled. In 2008, Bolsonaro – who spent this anniversary fittingly in Israel – said that the problem with the military dictatorship is that ‘it tortured but did not kill’. A new document from the Italian archives shows that in the first days of the coup in 1964, the military – with the full connivance of the United States government – arrested at least 20,000 people (not the 5,000 earlier thought). It is likely that the numbers of those killed have also been deflated. When Camilo Tavares and Karla Ladeia released their documentary O Dia que Durou 21 Anos in 2012, I watched it in awe – the story of this brutal US-backed coup against a democratic government in Brazil, a coup that lasted from 1964 to 1985, had been buried. How little we know of ugly things that are right in front of us.

It was the movement of the people – of which Lula was an important leader – that ejected this dictatorship of the ‘decayed elite’ in 1985, and it was the people who demanded relief from the penalties of the five hundred years of oligarchic rule. Impossible to overturn the myriad problems of Brazil in a few years, let alone in a few decades. Nevertheless, whatever gains were made had to be overturned, including the policies on hunger and on protection of the environment. Bolsonaro’s eye, along with the eyes of many international corporations, is on the Amazon (for more, see our latest dossier on the dangers to Brazil’s Amazon).

And even more ugly, whatever democratic atmosphere had been created had to be rolled back. The noise of racism and misogyny tries to cancel out everything sensitive in the world, the terrible right of the oligarchy to claim nature and human labour ringing the death knell to Bolsa Familia and Brasil sem Miséria. Elections continue, as they did to elect Bolsonaro, but they are hollowed-out. This is a global scandal. In the name of democracy, oligarchy has asserted itself handsomely. The vast amounts of money, the intimidation of voters, the use of social media (notably WhatsApp) to create confusion has become normal from Brazil to the United States, from Argentina to India (on the Indian elections, I highly recommend the current issue of Frontline, and on the deformation of the electoral process, you can read my review of a new book by India’s leading psephologist Prannoy Roy).

Violence has become an instrument of ‘democracy.’ The homeopathic use of it against activists is common from one end of the planet to another. We have become inured to the violence done to political activists, cynicism itself a weapon of the oligarchy against hope. The murder of the South African communist Chris Hani in 1993, just before the country emerged out of apartheid, was a loud message that the South African ‘decayed elite’ would not tolerate anything other than its control over the country’s wealth and resources. It would allow ‘democracy’, if this democracy would not challenge its gains. 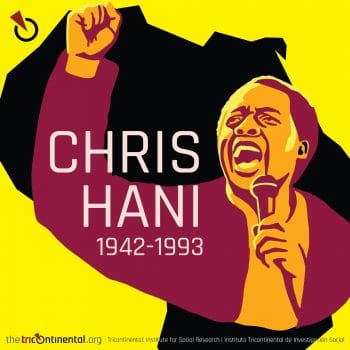 After Hani died, Nelson Mandela gave one of his finest speeches. ‘There have been many changes, and negotiations have started’, Mandela said, ‘but for the ordinary black person of this country, apartheid is alive and well’. For the ‘ordinary black person’ – the Afro-Brazilian and the indigenous – a special kind of Brazilian apartheid is also alive and well. ‘We want to build a nation free from hunger, disease and poverty, free from ignorance, homelessness and humiliation, a country in which there is peace, security and jobs’, said Mandela as he honoured Hani.

That hope is a foothold today. It provides the bursts of energy in the interstices of ugliness. The formation of the Socialist Revolutionary Workers Party in South Africa this week comes just as in Algeria President Abdelaziz Bouteflika steps aside and opens a new process for his country, and as the Turkish city of Tunceli elected Fatih Mehmet Maçoglu of the Communist Party of Turkey to be its mayor. In that election, the ruling party of Recep Tayyip Erdoğan lost in Turkey’s three largest cities (thanks in large part to the pro-Kurdish left force, the HDP). Small gestures against the ‘decayed elite’ in anticipation of larger deeds. This is what Lula will see when he looks out the window on 7 April. Ugliness, yes, but also these leaps of optimistic hope.

PS: below, in Delhi (India), at LeftWord Books, Cristiane Ganaka of our São Paulo (Brazil) office released the English edition of Truth Will Prevail: Why I have been condemned, a long interview with Lula. She is being introduced by Sudhanva Deshpande, Managing Editor of LeftWord Books. On the right, is the fabulous book cover, designed by Tings Chak, our lead designer. Dossier #15 – out next week – is on design and art, cut through with political purpose. Keep an eye out for it. 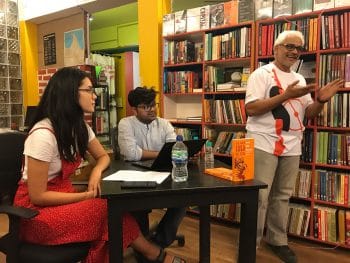 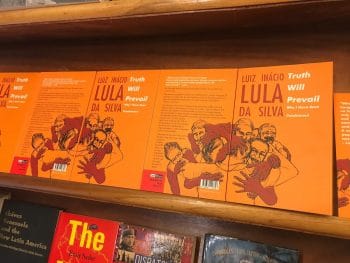