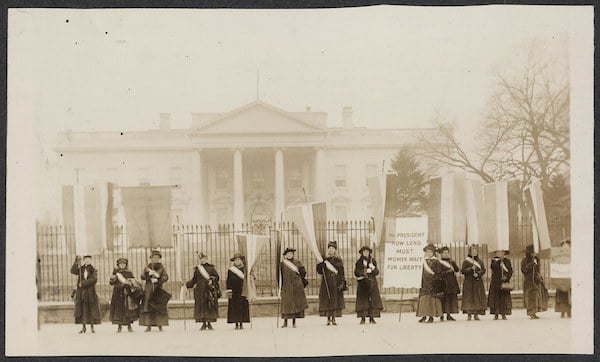 At the first International Conference of Women’s Museums, held in Italy in 2008, Iranian Nobel Laureate Shirin Ebadi declared: “There has to be a women’s museum in every country in this world!” Ebadi’s vision is a necessary corrective to centuries of strategic omission in mainstream museums concerning women’s history and cultural contributions.

Astrid Schönweger, Coordinator of the International Women’s Museum Network (IWMN), characterizes the traditional museum approach to collecting, preserving and exhibiting as revealing administrators’ determinations of which objects have value—and which do not. The latter includes thousands of years of women’s activities, achievements, and culture. Schönweger calls museums “the authorities of forgetting the ‘other’”—the ‘other’ being everyone who is not white, heterosexual, able-bodied, middle or upper class, and male. Marianne Pitzen likewise says that she established the Bonn Women’s Museum because “50 percent of society was simply missing—not the painted nudes or disrobed sculptures of course, but women as protagonists”.

But is the exclusion of women from authoritative historical institutions really a question of “forgetting” or “missing,” or is it happen by design? Speaking on his induction into the archivist profession in Scotland in 1975, Alistair Tough recalled being told by senior colleagues “never to waste time on women’s papers.” Moreover, he was advised to ensure that such documents, once designated for removal, were “actually destroyed and that no evidence of the matter was kept, lest historians should make a fuss about it later”. Such erasure is not accidental.

Decisions made in museums day-to-day determine what will be collected, preserved and exhibited; whose voices and stories will be represented, visible, and centred; how objects will be interpreted. It is no secret that the museum sector has long been dominated by white, male, middle-class decision-makers at the higher levels. Representation is as much a problem in the workforce as it is within collections.  Artist, curator and art historian Helen Gørrill identifies an apparent cap of 30 percent on Tate London’s collection of women artists and an allocation of only 13 percent of its annual budget for the collection of their work in recent years. This, notes Gørrill, will have a marked negative impact on future understandings of who produced art in the twenty-first century. “The museum preaches diversity”, writes Gørrill “but its annual acquistions suggest that great art is mostly created by men”.

Whether omissions arise “accidentally”—because the dominant demographic simply does not see people outside of their own identity group—or by design—those people are seen, but not deemed valuable or relevant—action is needed. Existing dominant narratives will not change unless people in positions of power represent a wide range of marginalised identities (gender, disability, race, ethnicity, sexuality, religion, and socio-economic class).

Women’s museums help challenge partial narratives by focusing exclusively on women’s histories and forms of cultural production, with many promoting those conversations across transnational locations via informal and formal networks such as the IWMN. In their diverse work, these museums draw attention to and make evident women’s erasure from mainstream cultural knowledge. They correct representational myth-making and damaging stereotyping while concurrently operating as a space for women’s visibility and validation. They provide access points to the cultural heritage that has been denied them as a result of sexism.

Gørrill’s findings on the omission of women art and artists from the Tate’s collections are replicated in science, historic and natural history museums across the UK. These lacunas impact how women are viewed within societies and how women see and feel about themselves.

There are efforts towards change across the sector—and action from people unwilling to wait for change from the top. Museum practitioner and academic Nicole Robert notes that “museum professionals have long grappled with the problems of identity-based exclusion within museum exhibits, programs, and collections. At the same time, marginalised groups have established their own identity-based museums.” Glasgow Women’s Library (GWL) the only Accredited Museum in the UK dedicated to women’s lives, histories and achievements is just one example of this interventionist approach. Co-founded in 1991 by Dr Adele Patrick, GWL speaks to the importance of museums as spaces for documenting our histories, and to the human need for visibility and representation.

The principles of feminism—inclusion and equality—underpin the mission of women’s museums across the world. They promote a meaningful values-led approach rooted in personal responsibility and social justice. This is demonstrated in the work of GWL, through its lending library, archive collections, programmes of public events and learning opportunities. GWL operates within a consciously feminist and participatory framework, a theoretical perspective that motivates a cross-organisation commitment to equality, diversity and inclusion.

Women’s (and specifically feminist) museum practitioners answer the need for better cultural provision because it is a personal need. We create relevancy for ourselves and our communities—an approach rarely seen in mainstream museums, particularly at the level of strategic leadership. For Schönweger, the foundation of a women’s museum is a “strategy for raising awareness about the rights of women and to help create jobs and educational institutions.” This approach acknowledges the ways that our educational institutions fail many women, most notably working class, disabled, black women, women of colour, trans women, and non-binary people. Women’s museums counter those failings by establishing cultural spaces which support and centre women’s access to resources that are relevant and meaningful to their own lives.

In mainstream museums, educational and community outreach programmes remain on the margins of provision and are often devalued in comparison to management or curation. Yet the impact that meaningful cultural engagement with museums has on people’s wellbeing, social isolation and enrichment and prolonged life has been well documented in research by Health and Culture (a partnership between The Whitworth, Manchester Art Gallery, Manchester Museum, the University of Manchester and Central Manchester University Hospitals) and the Research Centre for Museums and Galleries, among others.

Women’s museums are often also important sites for research that is attuned to questions of equality and social justice. GWL’s Equality in Progress project typifies this practice, drawing on over 25 years of work with diverse communities as well as cross-disciplinary theory—from critical race theorist Kimberlé Crenshaw’s research on Black women’s employment experiences in the U.S. to sociologist Joan Acker’s research on “inequality regimes” in the Swedish finance sector—to gain important new insights into the spectrum of ways that structural, institutional and attitudinal inequalities impact access to museums. The project and resulting report “Research from a Grassroots Museum” advocates for mainstream museums to embrace research and practice from outside the museum field, and to use a feminist analysis of inequality to support museums in enacting sustainable change.

Kylie Message calls for museums and museum studies to approach the demand for social imperative and purpose as “intellectual activism” which is drawn from across “museum studies, cultural studies, public history, and social movement studies”. Partnerships with and learning from women’s museums offer manifold benefits for the sector— most importantly the transformation of popular conceptions of ‘the museum’ from a place of benevolent, patriarchal enlightenment for the masses, to a vibrant, equality-led site of life-long learning and of social change for all.