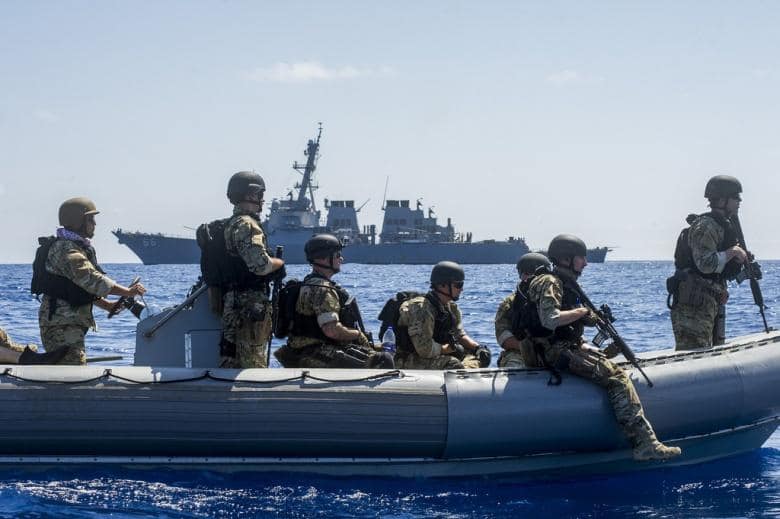 Opposition leader Juan Guaido has requested “cooperation” from the US Southern Command. (US Navy, Flickr)

Self-declared “Interim President” Juan Guaido has ordered the setting up of a meeting with the U.S. Armed Forces to discuss “cooperation” in his efforts to oust President Nicolas Maduro.

During a gathering of supporters in the upper middle class Caracas district of Las Mercedes on Saturday, Guaido informed that he was instructing his representative in the United States, Carlos Vecchio, to establish a “direct relationship” with the US Southern Command (SouthCom), which plans, oversees, and controls all U.S. overt and covert military operations in Latin America and the Caribbean.

The initiative by Guaido stokes increasing fears that he looks to oust Maduro using a foreign-led intervention. Italian newspaper La Stampa published an interview with Guaido Friday, in which the opposition leader explained that “If the North Americans proposed a military intervention, I would probably accept it.”

In a letter to U.S. SouthCom chief Admiral Craig Faller Monday, Vecchio requested a meeting to discuss “strategic and operational” cooperation, alongside concerns over what he describes as “the [existing] presence of un-invited foreign forces” in Venezuela. No evidence for this claim was provided by Vecchio.

#Venezuela: following instructions of Interim President @jguaido, we officially requested the @Southcom a meeting with a technical delegation to advance in strategic and operational planning with the priority goal of stopping our people's suffering and restoring democracy. pic.twitter.com/x3ckEn39cM

Venezuelan authorities were quick to respond to the opposition’s move, with Vice President Delcy Rodriguez qualifying it as “repulsive” and “doomed to fail.” Recent polls suggest that over 86 percent of Venezuelans oppose a foreign-led military incursion into the country.

While SouthCom are yet to confirm if they will meet Guaido’s team, Faller had earlier tweeted that he looked forward to discussing how to “restore [the] constitutional order” in Venezuela and that his forces stood “ready.”

When invited by @jguaido & the legitimate gov't of #Venezuela, I look forward to discussing how we can support the future role of those @ArmadaFANB leaders who make the right decision, put the Venezuela people first & restore constitutional order. We stand ready! #EstamosUnidosVE pic.twitter.com/F6ib7mfO47

Guaido and U.S. officials have repeatedly stated that all options, including a military intervention, are “on the table.” However, other countries that have voiced support for Guaido have publicly rejected the possibility of intervention, including Chile, Peru, Colombia, Spain and Canada.

The overtures to the U.S. SouthCom come on the heels of a failed military putsch on April 30 and numerous unheeded calls by Guaido for the Venezuelan armed forces to support him.

After swearing himself in as “interim president” on January 23, the National Assembly president received the backing of roughly 25 percent of the world’s governments. His unsuccessful efforts to remove the Maduro government, which included a humanitarian aid “showdown” on the Colombian-Venezuelan border, have seen his support dwindle in numbers.

Guaido’s call for cooperation with the U.S. military came as Washington unveiled a new set of sanctions against Venezuela on Friday.

According to the Treasury Department, the firms and tankers have delivered crude oil from Venezuela to Cuba since late 2018. Venezuela delivers around 50,000 barrels per day of crude to Cuba as part of wide ranging cooperation agreements which include the presence of roughly 20,000 Cuban medical and agricultural technicians in Venezuela.

The sanctions follow similar measures announced in April, while the Venezuelan economy has recently seen restrictions imposed on its banking and mining sectors, as well as a de facto oil embargo.

Similarly, Guaido also called on those European countries which recognise him as the “legitimate” president to “amplify” economic sanctions against Caracas this weekend, as well as urging assistance in international courts to oust Maduro.

Sanctions have repeatedly been declared illegal by independent multilateral agencies. Recent comments from the UN Special Rapporteur Idriss Jazairy argued that the sanctions also violate human rights, while an April report from the Washington-based Center for Economic and Policy Research (CEPR) indicated that U.S. economic sanctions have directly caused over 40,000 deaths in Venezuela since 2017.

Apart from calling for more sanctions, Guaido also urged European governments to grant “maximum legitimacy” to his appointed representatives. European governments largely continue to have complete or partial diplomatic relations with the ambassadors named by the Maduro administration.

Efforts by Guaido’s representative in the US, Carlos Vecchio, to take over the vacated embassy building in Washington also continue to be frustrated by a group of U.S. solidarity movements who have been occupying the building, with the permission of the Venezuelan government, since April 12.

Action was taken by the Venezuelan Navy and Air Force when the USCG James approached a distance of 13 nautical miles (15 miles) off Venezuela’s northern coast. The vessel changed course away from Venezuela’s coastline following a radio request to do so.

According to U.S. Southern Command spokesperson Colonel Amanda Azubuike, the vessel was carrying out “a mission to intercept drugs.” 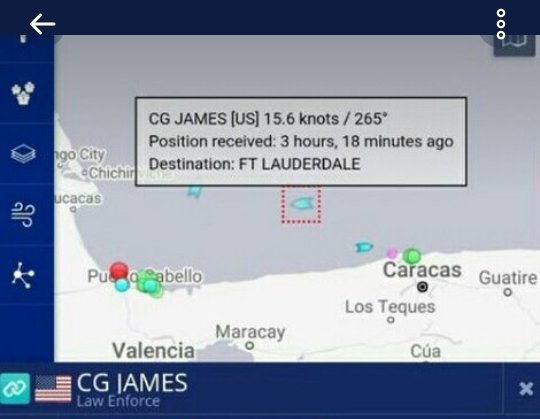 The reported location of the U.S. Coast Guard James 754 before being asked to change course. (@rocaLaMolesta / Twitter)

“I don’t know if other Republics would accept actions like these in their maritime jurisdiction, but we won’t,” Venezuelan Defence Minister Vladimir Padrino Lopez stated Saturday, describing the incident as a “provocation.” 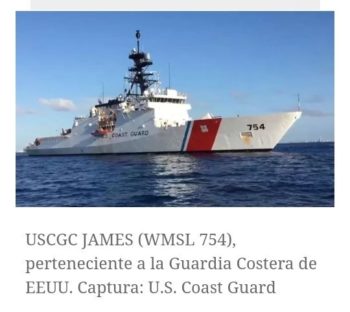 “All operations of law enforcement in this place where the U.S. vessel was correspond to Venezuela by international law. This was an armed coast guard patrolling these waters,” he went on to state.

The USCG James was detected in the so-called contiguous zone of Venezuelan waters which covers 12-24 miles from the coastline. In this maritime band and according to international law, the free passage of foreign ships is allowed, but Caracas has full sovereignty in political, migratory, border, sanitary, and fiscal matters, including law enforcement and “intercepting drugs.”

According to the US Navy website, the USCG James (WMSL 754) is one of the most advanced patrol vessels in its fleet, carrying modern surveillance and reconnaissance equipment, as well as being able to serve as a command post for “complex law enforcement and national security missions involving the Coast Guard and numerous partner agencies.”

The border incursion comes as Caracas reopened its borders with Brazil and the Dutch island of Aruba on Friday, in efforts to boost border trade. The borders had been closed for over three months since Guaido’s failed attempt to force humanitarian “aid” into the country on February 23.

Venezuelanalysis.com is an independent website produced by individuals who are dedicated to disseminating news and analysis about the current political situation in Venezuela.