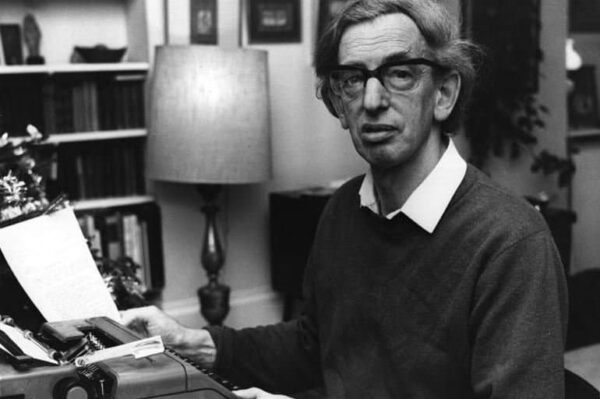 I’m in The New Yorker this morning, writing about Richard Evans’s new biography of the historian Eric Hobsbawm, explaining how the failures of Evans the biographer reveal the greatness of Hobsbawm the historian:

Hobsbawm’s biographer, Richard Evans, is one of Britain’s foremost historians and the author of a commanding trilogy on Nazi Germany. He knew Hobsbawm for many years, though “not intimately,” and was given unparalleled access to his public and private papers. It has not served either man well. More data dump than biography, Eric Hobsbawm: A Life in History is overwhelmed by trivia, such as the itineraries of Hobsbawm’s travels, extending back to his teen-age years, narrated to every last detail. The book is also undermined by errors: Barbara Ehrenreich is not a biographer of Rosa Luxemburg; Salvador Allende was not a Communist; .* The biography is eight hundred pages because Hobsbawm “lived for a very long time,” Evans tells us, and he wanted “to let Eric tell his story as far as possible in his own words.” But, as we near the two hundredth page and Hobsbawm is barely out of university, it becomes clear that the problem is not Hobsbawm’s longevity or loquacity but the absence of discrimination on the part of his biographer.Instead of incisive analyses of Hobsbawm’s books, read against the transformations of postwar politics and culture, Evans devotes pages to the haggling over contracts, royalties, translations, and sales. These choices are justified, in one instance, by a relevant nugget—after the Cold War, anti-Communist winds blowing out of Paris prevented Hobsbawm’s best-selling The Age of Extremes from entering the French market in translation—and rewarded, in another, by a gem: Hobsbawm wondering to his agent whether it’s “possible to publicize” “Age of Extremes,” which came out in 1994, “& publish extracts on INTERNET (international computer network).” Apart from these, Evans’s attentions to the publishing industry work mostly as homage to the Trollope adage “Take away from English authors their copyrights, and you would very soon also take away from England her authors.”…

Hobsbawm was obsessed with boredom; his experience of it appears at least twenty-seven times in Evans’s biography. Were it not for Marx, Hobsbawm tells us, in a book of essays, he never would “have developed any special interest in history.” The subject was too dull. The British writer Adam Phillips describes boredom as “that state of suspended anticipation in which things are started and nothing begins.” More than a wish for excitement, boredom contains a longing for narrative, for engagement that warrants attention to the world.

A different biographer might have found in Hobsbawm’s boredom an opening onto an entire plane of the Communist experience. Marxism sought to render political desire as objective form, to make human intention a causal force in the world. Not since Machiavelli had political people thought so hard about the alignment of action and opportunity, about the disjuncture between public performance and private wish. Hobsbawm’s life and work are a case study in such questions. What we get from Evans, however, is boredom itself: a shapeless résumé of things starting and nothing beginning, the opposite of the storied life—in which “public events are part of the texture of our lives,” as Hobsbawm wrote, and “not merely markers”—that Hobsbawm sought to tell and wished to lead.

Down the corridor of every Marxist imagination lies a fear: that capitalism has conjured forces of such seeming sufficiency as to eclipse the need for capitalists to superintend it and the ability of revolutionaries to supersede it. “In bourgeois society capital is independent and has individuality,” The Communist Manifesto claims, “while the living person is dependent and has no individuality.” Throughout his life, Marx struggled mightily to ward off that vision. Hobsbawm did, too.…But what the Communist could not do in life the historian can do on the page. Across two centuries of the modern world, Hobsbawm projected a dramatic span that no historian has since managed to achieve. “We do need history,” Nietzsche wrote, “but quite differently from the jaded idlers in the garden of knowledge.” Hobsbawm gave us that history. Nietzsche hoped it might serve the cause of “life and action,” but for Hobsbawm it was the opposite: a sublimation of the political impulses that had been thwarted in life and remained unfulfilled by action. His defeats allowed him to see how men and women had struggled to make a purposive life in—and from—history.

The triumph was not Hobsbawm’s alone. Moving from politics to paper, he was aided by the medium of Marxism itself, to whose foundational texts we owe some of the most extraordinary characters of modern literature, from the “specter haunting Europe” to the resurrected Romans of the “Eighteenth Brumaire” and “our friend, Moneybags” of “Capital.” That Marx could find human drama in the impersonal—that “the concept of capital,” as he wrote in the Grundrisse, always “contains the capitalist”—reminds us what Hobsbawm, in his despair, forgot. Even when structures seem to have eclipsed all, silhouettes of human shape can be seen, working their way across the stage, making and unmaking their fate.

You can read it all here. Also, as many of you know, for the last two years, I’ve been making the case that Donald Trump’s presidency is what the political scientist Steve Skowronek calls a “disjunctive” presidency. Over at Balkinization, I use the opportunity of my deep, deep agreement with the great Jack Balkin—whose views on so many things I share, and who also has argued for Trump as a disjunctive presidency—to raise some questions about our shared position, and where our analysis may go awry. You can read that here.

* Several astute readers pointed out to me that this locution of traveling “up” somewhere is often used in Britain to signify going from a smaller to a larger place rather than traveling from south to north. I passed the information on to my editor at The New Yorker, and they’ve now cut the phrase from the text. I’m leaving it here because, well, the error was mine, and in a passage where I’m pointing out Evans’s errors, I should acknowledge my own.