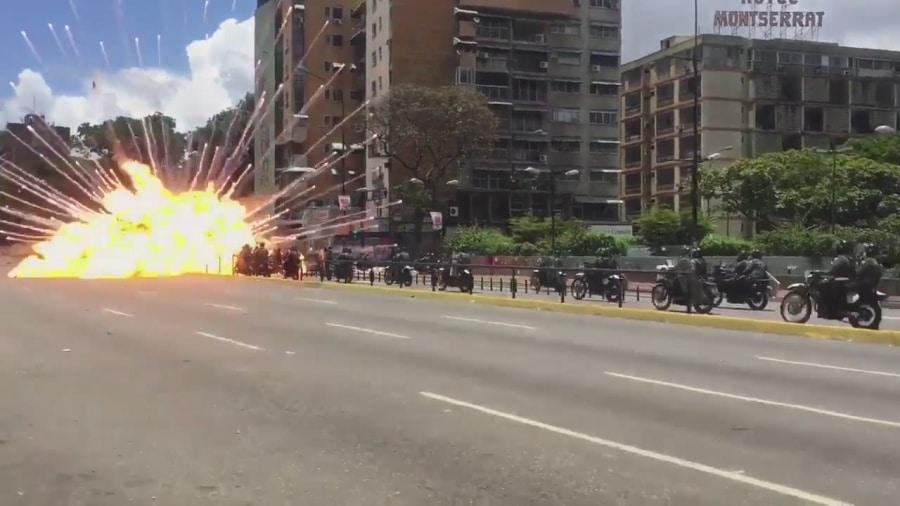 On Monday, the U.S. Treasury Department labeled the elected Venezuelan leader a “dictator” and froze his alleged assets in the United States. The measure was legally authorized under Executive Order 13692, which was signed by President Barack Obama in 2015 and brands Venezuela an “unusual and extraordinary threat” to U.S. national security.

For his part, Maduro fired back at the White House, calling the move an “expression of impotence [and] desperation”.

“They [the US] see Latin America as a lapdog that wags its tail and nods yes. It’s an irate reaction because the Venezuelan people and its president disobeyed [the US’] order to suspend the National Constituent Assembly,” he declared.

“I don’t obey imperial orders and moreover [I am] against U.S. imperialism,” the head of state continued.

The sanctions come on the heels of ANC elections that saw 8,089,4320 Venezuelans turn out to vote, a figure that surpasses the 7,587,579 votes Maduro received in his narrow 2013 election victory.

In the lead-up to the elections, Washington sanctioned 13 top Venezuelan officials and threatened “strong and swift economic actions” if the initiative to redraft Venezuela’s constitution went ahead.

Despite the high turnout, the U.S. State Department has refused to recognize election and several close U.S. allies have followed suit, including Canada, Spain, the UK, Argentina, Peru, Colombia, Mexico, and Panama. The European Union similarly expressed “grave doubts as to whether the election result can be recognized”.

For its part, Russia dismissed the international chorus rejecting the result as “destructive”.

“We hope that those members of the international community who want to reject the results of the Venezuelan elections and increase the economic pressure on Caracas, show restraint and renounce these destructive plans that can sharpen the polarization of Venezuelan society,” the Russian Foreign Ministry said in a statement.

In particular, Bolivian President Evo Morales hit out at Mexico and Colombia, whom he said would do well to “have their own constituent assembly… to change their capitalist system, their imperialist system”.

Within Venezuela, the result sparked condemnation from the country’s right-wing opposition coalition, the MUD, as well as Attorney General Luisa Ortega.

The MUD, which boycotted the elections despite repeated overtures from the government to participate, has raised allegations of voter fraud, but has yet to provide evidence to back its claims.

“We do not recognize this fraudulent process, for us it is null and void,” declared Miranda Governor Henrique Capriles. As the MUD candidate against Maduro in 2013 presidential elections, Capriles refused to recognize his narrow defeat, calling on his supporters to “vent their anger” in the streets. Eleven people were killed in the ensuing post-election violence.

International electoral observers, for their part, reported that the electoral process was transparent.

“[Venezuelans] have concurred in a civic and peaceful manner to exercise their right to vote in a free, universal, direct, and secret election as expressed in Article 63 of the Bolivarian Constitution,” stated the Council of Electoral Specialists of Latin America, which is composed of ex-presidents and electoral monitoring officials from throughout the region.

Venezuela’s National Electoral Council announced the preliminary results on Sunday evening, but it has yet to release the state-by-state vote breakdown as well as the full list of candidates elected. On Monday, the electoral body was the target of a cyber attack by opposition hackers that shut down its website for a number of hours, together with that of Venezuela’s state television network.

Sunday’s vote was rocked by deadly anti-government violence aimed at preventing the election from taking place.

On the eve of the vote, an ANC candidate for the communes sector was assassinated in Bolivar state. Children’s rights activist and community organizer Felix Pineda Marcano (39) was gunned down in his home in Ciudad Bolivar on Saturday evening. Authorities are actively investigating the murder, which they believe could be politically motivated.

Meanwhile, over the course of the day, 200 voting stations were besieged by opposition militants across the country, according to Defense Minister Vladimir Padrino Lopez.

In Tachira state, National Guard Second Sergeant Ronald Ramirez was shot in the head and killed near a military installation in La Grita.

The Public Prosecution (MP) has reported 9 other deaths over the course of the day’s events.

In addition to Ramirez, two unnamed adolescents and a third man by the name of Jose Cardenas were killed in Tachira state. In Merida, Angelo Mendez and Eduardo Olave were killed in the early hours of the morning before voting began, while Jose Sanchez also lost his life under unknown circumstances.

In Lara state, Luis Zambrano (43) was reportedly shot dead in an anti-government protest in Barquisimeto. Elsewhere in Sucre state, the MP confirmed the death of Democratic Action youth leader Ricardo Campos during an opposition protest in the early hours of the morning.

A man by the name of Haidar Ocando was likewise killed in Zulia state, though no further details are yet known concerning the cause of death. The MP has dispatched state district attorneys to investigate all of the fatalities.

As captured on camera, the police motorcyclists are seen driving down Francisco de Miranda Avenue when suddenly a bomb goes off, producing a giant explosion as onlookers cheer.

Eight officers were injured in the blast with first, second, and third degree burns. The Public Prosecution is investigating.

The incident marks the second time in a month that large-scale explosive devices has been used in the wealthy eastern Caracas municipality of Chacao. On July 10, seven National Guard officials were injured in a similar remote-detonated explosion.

In total, the Interior Ministry has reported that 21 state security personnel suffered gunshot wounds over the course of the day. Forty-nine people were arrested for attacks on military personnel on Sunday.

Venezuelanalysis.com is an independent website produced by individuals who are dedicated to disseminating news and analysis about the current political situation in Venezuela.