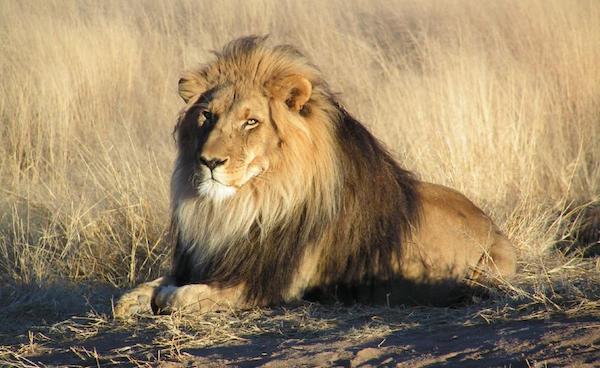 A British company is organising hunts of captive lions for trophy hunters, finds investigation by the Campaign to Ban Trophy Hunting.

Blackthorn Safaris, based in Oswestry, hosts ‘canned’ hunts on an estate 40 miles north of the mining town of Kimberly, in South Africa’s Northern Cape district.

The company is owned by Alex Goss, a Shrewsbury businessman who also organises bird-shooting holidays in Africa and in the UK.

In addition to lion hunts, Blackthorn offers trophy hunting for people wanting to shoot elephants, leopards, hippos, and crocodiles. Other hunts on offer from the company include zebras, buffaloes and antelopes.

Eduardo Goncalves, founder of Campaign to Ban Trophy Hunting, said: “In the shocking world of trophy hunting, there is nothing more depraved than captive lion hunting.

For an apparently British company to be actively organising captive lion hunts will make people sick to the stomach.

The government should ban the import of hunting trophies, help close the loophole in international law which lets hunters shoot endangered animals for ‘sport’, and support moves to abolish all trophy hunting.

The Campaign to Ban Trophy Hunting branded the ‘canned hunting’ industry as ‘cowardly:

You might as well as be shooting a zoo animal.

Canned hunting is so cowardly that even some trophy hunters–hardly paragons of virtue–find it repugnant.

Lion cubs are ripped from their mothers a few days or hours after birth by this industry. They are then reared in captivity to be shot for entertainment.

They cannot possibly escape, and probably assume an approaching trophy hunter is a keeper bringing it dinner.

Hundreds of lionesses are shot in these facilities every year and their bones sold to south-east Asian traders for phoney medicines.

Court records show many of those involved are known wildlife traffickers and notorious crime syndicates.

After the killing of Cecil the lion in 2015, Rory Stewart promised to stop British lion hunters from bringing back their trophies into the country. He then quietly dropped the pledge.

A few weeks ago, Michael Gove hosted a meeting of conservationists and hunting groups where there was unanimous consensus against canned hunting. Even though the UK and European trophy hunting industry groups condemned it, nothing has happened.

In a few weeks, governments will be meeting in Geneva to decide the fate of wildlife species hunted for sport. CITES is meant to protect endangered wildlife, yet incredibly it grants hunters an exemption which allows them to shoot threatened species for selfies and trophies.

The government says Britain is a leader in animal welfare and conservation. In fact, Britain is one of the worst countries in the world for canned lion hunters. The revelation that it allows canned lion trophies to freely enter the country runs a coach and horses through this claim.

To repair its shattered credibility, the government should be calling for urgent reform of CITES and for this extraordinary loophole to be closed with immediate effect.

There are an estimated 10,000 lions in over 300 breeding and canned hunting centres across South Africa.

Large numbers of lions were also sent to ‘zoos’ in China and Vietnam – these may also end up in the lion bone trade.

Lionesses are forced to become ‘cub mills’ through intensive breeding. They do this by taking her cubs away, sometimes when they are just a few hours old.

When the lionesses are too old to breed, they are shot and their skeletons sold for around $1500-2000.

Because of the problems of in-breeding and disease, lions are sometimes illegally taken from the wild to refresh bloodlines. Lions are killed in neighbouring countries to take their cubs which are then sold onto lion farmers.

To make ‘lion wine’, the carcass of the lioness is hoisted up by the hind legs and hung down from a beam. Knives are used to cut her open and peel the skin. The meat is cleaved away and the layers of fat are stripped. The skeleton is left intact, often still connected by tendons.

The skeletons are then placed in large aquarium fish tanks about 2 metres long which have been filled with alcohol. Another method is to reduce the bones to powder and add it to wine.

To make the ‘cake’, the skeletons are boiled in water, often alongside muntjac bones and turtle shell. The gravy-like residue that floats on top is scooped off to make the ‘cake’ bars.

The demand for lion bones follows the collapse of the tiger bone trade, as the wild tiger population has been virtually wiped out. Lion and tiger bones are virtually indistinguishable. The lion bones are often passed off as tiger bones.

Some South African lion bone exporters are known to be linked to the Laos-based Xaysavang Network which was described by ex-U.S. Secretary of State John Kerry as “one of the most prolific international wildlife trafficking syndicates in operation.” The network has been heavily involved in the illegal rhino horn trade.

Its leader, Thai kingpin Chumlong Lemtongthai, was jailed after he was found in possession of not only rhino hor but also of 60 illegally obtained lion bones. During the trial it emerged that in Laos the “main business of the company” was to trade in lion bones.

Eduardo Goncalves added: “Lions are in serious danger of going extinct. In the 1950s, there were up to 450,000 lions in the wild. Today there are just 20,000. Lions have disappeared from 90% of their range and gone extinct in 26 countries.

Britain is one of a ‘Deadly Dozen’ group of nations responsible for the largest number of captive Lion trophies taken from Africa each year.